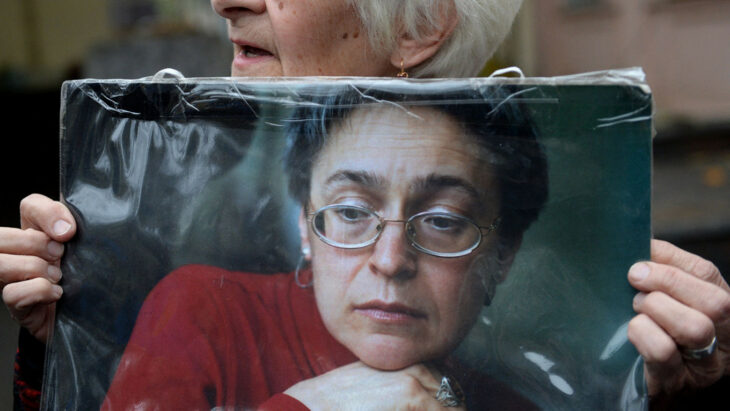 Russians commemorated Thursday the killing of investigative journalist Anna Politkovskaya 15 years ago on President Vladimir Putin’s birthday, while her newspaper warned time had run out to punish the masterminds of the murder.

Politkovskaya, a fierce critic of Putin and the Kremlin’s wars in Chechnya, was shot dead on Oct. 7, 2006, in the entrance hall of her apartment block in central Moscow. She was 48 years old.

Falling on Putin’s birthday, the killing of a top investigative reporter — who worked for Russia’s leading independent newspaper Novaya Gazeta and contributed to Western publications including The Guardian — sent shockwaves around the world.

But after all this time, investigators have yet to say who was behind the apparent contract killing.

“Neither I nor Novaya Gazeta have a final understanding of who ordered” the hit, her son Ilya Politkovsky told AFP on Thursday.

On the eve of the anniversary, Novaya Gazeta said the authorities have no real interest in pursuing the investigation any further for political reasons.

“Fifteen years after the murder of our journalist, the statute of limitations on the crime has expired. By law, only a court can extend it,” Novaya Gazeta wrote.

“Otherwise, the masterminds will go unpunished.”

The commemorative events at Novaya Gazeta’s editorial offices in Moscow come amid an unprecedented crackdown on the opposition and independent media, with authorities imprisoning Russia’s top opposition politician Alexei Navalny.

“She wrote about what is happening today even then,” Politkovsky said at Novaya Gazeta’s newsroom, where his mother’s office has been turned into a small museum in her memory and was visited by foreign diplomats Thursday.

“Much of what she wrote turned out to be a prophecy.”

“We would all of course like for the instigators of this crime — both who ordered and executed it — to be punished,” Dmitry Peskov told reporters.

Asked if the Kremlin would be in favor of extending the statute of limitations for Politkovskaya’s murder, Peskov said that the “inevitability of punishment” for such crimes was paramount.

In 2014, a court sentenced two men to life in prison for Politkovskaya’s killing and handed lengthy prison terms to three others involved.

Lom-Ali Gaitukayev, a Chechen man who was found guilty of organizing the hit, died in 2017 in a penal colony where he was serving a life sentence.

Novaya Gazeta staff have conducted their own investigation, and on Thursday released a nearly two-hour film on YouTube detailing their years-long probe.

In 2018, the European Court of Human Rights condemned Russia for failing to take adequate steps to find those who ordered Politkovskaya to be killed.

Judges concluded that Russian investigators should have explored possibilities that the crime was ordered by “agents of Russia’s FSB domestic secret service or of the administration of the Chechen Republic.”

“We call on the Russian government to ensure that all those responsible for Anna Politkovskaya’s assassination are brought to justice through an open and transparent judicial process,” the EU’s delegation to Russia said Thursday.

Politkovskaya won numerous awards for her reports and books, while several awards were established in her name.

Co-founded by former Soviet leader Mikhail Gorbachev in 1993, Novaya Gazeta is one of the few media outlets left voicing criticism of Putin, who turned 69 on Thursday.

The newspaper has paid dearly for speaking out, however. Since 2000, six of its journalists have been killed in connection with their work.