This article was updated with comment by one of the alleged murder targets, Prague district mayor Ondrej Kolar, at 4:30 a.m. EDT, May 1, 2020.… 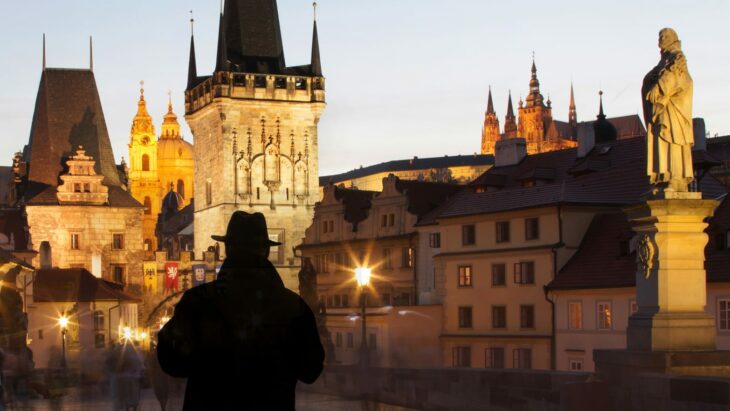 This article was updated with comment by one of the alleged murder targets, Prague district mayor Ondrej Kolar, at 4:30 a.m. EDT, May 1, 2020.

MOSCOW—Twenty years into the rule of former KGB operative Vladimir Putin, the Kremlin’s reputation for assassination is such that almost no plot seems too far-fetched, from bloody shootings—bullets in the back, for instance—to suspicious defenestrations: liquidations known in the trade as “wet work.” There’s also been a penchant for wildly exotic poisons that seem intended as Kremlin calling cards, reminding Putin’s enemies, when eventually discovered, of the nuclear, biological, and chemical arsenal he controls as well as his very long reach.

So, when a magazine in the Czech Republic reported over the weekend that two prominent politicians in Prague were targeted by a Russian assassin in retaliation for affronts to Moscow—and that the lethal weapon of choice was ricin, an infamous toxin—the article was taken seriously enough in Moscow and Prague to spark official responses.

Ondrej Kundra, a journalist for the Czech magazine Respect, wrote on Sunday that a Russian man entered Prague some weeks ago with an unspecified quantity of ricin in his suitcase and murderous intent.

If ricin is injected into the bloodstream, even 22 millionths of one gram can prove fatal; if ingested orally, a few grams are required. Ricin dust blown into the eyes can be deadly as well.

The poison, extracted from castor beans, was a famous component in the KGB array of toxins used to assassinate people from Eastern Europe during the Cold War, including one famous case where a Bulgarian dissident writer was killed in London with a tiny ricin-laced pellet shot into his leg from the tip of a KGB-confected umbrella.

In Russia, the foreign ministry glibly dismissed the allegation as the result of a fevered imagination, perhaps brought on by the coronavirus.

The article leaves much to be desired in terms of solid information. It is vaguely sourced, and lacking all sorts of critical details.

In other assassination plots tracked to the doors of the Kremlin, there were some efforts to disguise the killers’ origins. Investigators had to peel back layers of concealment before finding the signature poison and tracking those who delivered it.

In 2018, for instance, undercover Russian military intelligence officers eventually identified as Alexander Petrov and Ruslan Bashirov nearly killed Russian defector Sergei Skripal and his daughter, and did kill an innocent bystander, with the nerve agent novichok developed by the Soviets. But Petrov and Bashirov had traveled with false documents under assumed names. The mysterious man from Kundra’s story traveled openly on a diplomatic passport, it seems, was not detained, and if he had any ricin with him, may well have held onto it.

Where did the so-far nameless man travel from? How much ricin did he have in his suitcase? How did the alleged assassin get away with the poison, if the special services knew about the threat? The author could not answer any of these questions. “I only know that he arrived before April 10,” Kundra told The Daily Beast in a telephone interview. “I cannot even find out how he could arrive in my country during the COVID-19 shutdown.”

And why would Russia target two municipal officials in Prague? Kundra suggested an answer to this one: “To send a message to all other Czech politicians: If you promote anti-Kremlin policies, you will be rubbed out.”

The Czech foreign ministry confirmed to The Daily Beast that “a member of the Russian embassy in Prague had returned to Prague from a business trip a few weeks ago and was picked up at the airport by his colleagues. We can’t confirm or disprove the rest of the story.”

Russian and Czech officials have been at odds since Prague’s Mayor Hrib, one of the alleged targets for the ricin poison, renamed the square in front of the Russian embassy after Boris Nemtsov, the leader of opposition to Putin in Russia who was gunned down just outside the Kremlin walls five years ago. But this renaming of streets and squares in front of Russian embassies is not entirely new. It’s something of an international movement promoted, not least, by Nemtsov’s daughter, Zhanna.

A stretch of Wisconsin Avenue in front of the massive Russian embassy compound in Washington, D.C. was renamed Boris Nemtsov Plaza two years ago, and Lithuania has done much the same thing. When Prague followed suit in February this year, it denied officially that it was trolling Moscow—but of course it was.

The Kremlin was further offended when the mayor of Prague’s 6th district, Ondrej Kolar, removed the statue of a Soviet-era commander, Ivan Konev, on April 3. Russia regards Konev as a Soviet hero, mainly for his actions in World War II, while many Czechs remember him as a symbol of repression for his role helping to crush the Hungarian uprising of 1956 and the Prague Spring of 1968.

That the Konev statue was brought down so soon before the 75th anniversary of the victory over Nazi Germany on May 8 is especially galling for Moscow. “By demolishing Konev’s monument, they took a piss on the graves of millions of Russian soldiers who were victims of Nazis,” Sergei Markov, a pro-Kremlin political analyst, told The Daily Beast.

The Russian foreign ministry also protested the statue’s removal, but said any suggestion that such desecration would provoke an assassination plot is a “a sick fantasy.” Still, ministry spokeswoman Maria Zakharova said, “Prague should fully realize how serious the consequences of such methods and manipulations [of information] could be.” A state newspaper, Rossiyskaya Gazeta, mocked the Czech authorities’ reaction to Kundra’s article: “It turns out coronavirus does not destroy just the lungs but also the human mind,” the newspaper wrote.

Though partly obscured by the COVID-19 pandemic, the dispute between Prague and Moscow has continued to escalate. The suggestive equivocation of Czech Prime Minister Andrej Babis seemed to add credibility to the magazine report: “It’s not acceptable—if it’s true—for a foreign state to take action against our citizens here. We will certainly not allow any big world powers to influence our political affairs in any way,” Babis said.

Now several days have passed, but the Czech government has not released any more details about the mysterious alleged assassin, who would seem to be still in Prague in the Russian embassy.

One of the alleged targets, District Mayor Ondrej Kolar, told The Daily Beast that he did not have any details about the alleged assassin. “All I know is that there is a threat linked to the Russian Federation serious enough for police to put me and other two Prague officials under protection,” he said.

Kolar noted that the Russian minister of culture had called him a gauleiter, an offical appointed by the Nazis, while a Russian professor declared that he should be assassinated like Reinhard Heydrich, the Nazi SS commander known as “the Butcher of Prague” who was killed by the resistance in 1942.

“Such words of course encourage both Russians and their Czech ‘fans’ to threaten me and my family,” said Kolar, “so I receive emails with photos of guns, messages that call to torture and brutally rape my partner and get our children killed—sounds like these people would like to see us die.”

Skeptics have suggested propaganda agendas on both sides of the ricin allegation. “The story is very poorly sourced,” says Joseph Fitsanakis, a scholar of Russian security service operations and professor in the Intelligence and National Security Program at Coastal Carolina University in the United States. “I would not recommend any reporter treat it as a fact.”  Fitsanakis noted an infamous incident in 2018 in Ukraine when a reporter working with Kyiv’s security services allowed them to fake his assassination by a Russian hit team.

If there was a poison plot in Prague, there would be ample circumstantial evidence to back up the story and incriminate accomplices, Fitsanakis suggested. “Considering how many cameras there are in Prague, such an operation would mean burning several Russian agents,” Fitsanakis said. “I would not hurry at this point to point the finger at the Russians,” though he cited a dozen or so recent assassinations in Europe with likely Russian involvement, and added, “It is also important to note that Russian wet work displays an impressive array of methods of killing.”

One of the first poisonings allegedly ordered by Putin that drew major international attention was the murder of former Russian intelligence officer Alexander Litvinenko in London in 2006 using the rare radioactive isotope polonium 210.

When security analysts discuss the use of poison as an instrument of policy by the Soviet Union and post-Soviet Russia, they sometimes suggest an analogy with the United States’ targeted killing program using drones. And to be sure, U.S. President Donald Trump seems attracted by the idea that there’s moral equivalency, at least when rationalizing Moscow’s actions. As The New York Times reported last year, when London was pushing for the White House to expel dozens of suspected Russian operatives in the wake of the Skripal incident, Trump initially wrote off the poisoning, in the Times’ words, “as part of legitimate spy games, distasteful but within the bounds of espionage.”

Over the years, Soviet secret services experimented with various poisons including arsenic, thallium, atropine, and warfarin, sometimes seeking a type of death that might appear natural. A KGB officer who defected to Western Germany, Bohdan Stashynsky, has testified that dozens of assassinations on foreign soil were personally authorized by the senior leadership of the KGB and Communist Party. Many were never reported as murders.

Another defector, the former KGB general Oleg Kalugin, now lives in Washington. Kalugin remembers the day he received sanctions for the assassination in 1978 of Georgiy Markov, the Bulgarian dissident writer in London.

“I was in the room with the head of KGB, Yuriy Andropov, and the head of foreign intelligence, Vladimir Kryuchkov,” 85-year-old Kalugin told The Daily Beast in a phone interview on Wednesday. “Andropov told me he was against political assassinations, but Kryuchkov insisted that if we didn’t give Bulgarians the umbrella with poison, they would fire our friend, the head of foreign intelligence. So Andropov agreed and we passed the umbrella to Bulgarians.”

Under Putin, Russia convicted Kalugin in absentia for treason in 2002, which may give him a special interest in these matters.

The general says that the Federal Security Service, the successor to the KGB, and the GRU, Russian military intelligence, inherited the secret poison labs. And apparently, those in charge are not counting on the coronavirus to do their work for them.

Kalugin’s former colleague, Colonel Mikhail Lyubimov, spied in the United Kingdom and Scandinavia for two decades and later, after the fall of the Soviet Union, remained in Russia, where he wrote books full of anecdotes about KGB activity. But Lyubimov says he does not find the Prague scandal convincing.

The radioactive polonium poisoning in London in 2006, he said, was a shameful operation, judging by reports, since the assassins left traces of polonium 210 scattered around the city and on the plane they flew home on.

“I feel embarrassed,” he said. “KGB operations were thoroughly planned, double checked. There are much simpler ways to kill a person.” He suggested rogue officers might be to blame. “There might be some gang operating around the world, who knows, there are too many betrayers of Russia these days.”

But “within the bounds of espionage” assassinations are one tool, and propaganda another, and they sometimes overlap. What’s certain is that the alleged victims of the Prague poison plot are still alive. But the ricin, if it ever existed, is still out there.