For as long as official cases of COVID-19 have remained manageable inside the Russian Federation, Moscow was able to exploit the global coronavirus pandemic to… 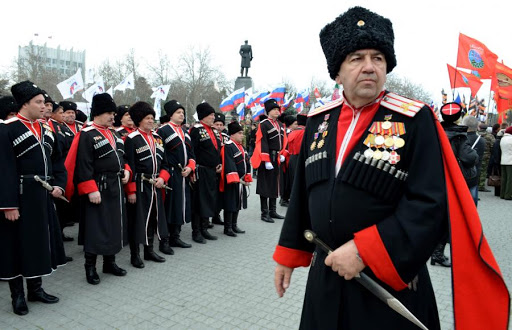 For as long as official cases of COVID-19 have remained manageable inside the Russian Federation, Moscow was able to exploit the global coronavirus pandemic to try to pursue various foreign policy goals (see EDM, April 13). This activism, combined with most international governments’ strong preoccupation with evolving disease outbreaks in their own countries, have raised fears that Russia might additionally try to use this opportunity to aggressively act on various territorial claims beyond its borders, perhaps to distract from domestic criticism. Given Moscow’s previous use of Cossack forces in the Donbas conflict and the annexation of Crimea, recent reports that new Cossack structures were created in the regions bordering Ukraine’s Kharkiv, Sumy, and Chernhiv oblasts raised understandable alarms (see EDM, April 9).

Of particular note has been the various evidence of Russian special services links to these newly deployed Cossack groups. For instance, Dmitry Prokopov was named chief of the Federal Security Service for Belgorod and Voronezh oblasts in August 2018—just prior to a law coming into effect calling for “volunteers” to help police these regions’ borders with Ukraine. Tellingly, Prokopov has a history of, until 2012, overseeing border guard cooperation with the Kuban Cossack Host, when he headed the Tymoshevsk Black Sea–Azov branch of the FSB Coast Guard (Radio Svoboda, March 26). Moreover, at the end of 2019, President Vladimir Putin signed into law a bill that further centralizes the state-supported (“registered”) Russian Cossack movement and creates an All-Russian Cossack Society as a layer of bureaucracy over the hitherto regional Cossack organizations (Prezident.org, November 5, 2019). This heightened activity around the Cossack structures inside Russia is a plausible indicator of potential planned future ventures by the Kremlin (see EDM, March 18).

Cossacks have been a central component of Moscow’s aggressive activities on Ukrainian territory, with the Kuban Cossacks playing a pivotal role in the annexation of Crimea. Russia also used the Don Cossacks to help occupy parts of Donetsk and Luhansk in 2014. Although some make the claim that the lands of Luhansk Oblast were formerly (until 1917) part of the Don Cossack Host, there is little sign this is currently being put forward as a serious assertion or ideological justification for any kind of action.

The Cossacks’ historical links with the Russian Orthodox Church have likewise been an important bridgehead for the Kremlin into Ukraine’s occupied territories. Support for the Cossacks explicitly comes from the Russian Church’s semi-autonomous branch inside Ukraine—the Moscow Patriarchate of the Ukrainian Orthodox Church (henceforth, UOC-MP)—and includes mundane logistics help as well as ideological backing, such as blessing Russian Cossack organizations.

Moreover, some UOC-MP priests and parishes have actively or passively supported the Moscow-backed separatist efforts in the Donbas territories of Donetsk and Luhansk. In the Luhansk diocese, for example, the Church’s collaboration with the separatists included the chaplain blessing the troops, the consecration of monuments, the erection of crosses to “the victims of Ukrainian aggression [sic],” the performance of oaths, and direct collaboration with the authorities in public events and actions (Religion.in.ua, February 3, 2018).

Moscow also allegedly sought to use the UOC-MP as a way to recruit pro-Kremlin fighters. In early 2014, Igor “Strelkov” Girkin, together with his direct sponsor, the “Orthodox oligarch” Konstantin Malofeev, visited eastern Ukraine and Crimea. Girkin was part of a Russian advance team who prepared a group of ideologically trusted military fighters in Ukraine who were organized under the cover of church attendance. The fighters were young, ostensibly devout, and well-educated. These individuals were key in the seizure of Crimea; they included Andrei Savelev (who went by the nom de guerre “Vandal”), Dmitrii Zhukov (“Kadr”), Sergei Zhurikov (“Romashka”) and Igor Druz (“Buk”) (Argumentua.com, May 3, 2018). The Kremlin’s instrumentalization of the UOC-MP has continued since then.

For instance, in Ukraine’s Zaporizhia Oblast, a region with a large ethnic-Russian population, numerous deacons openly sympathize with the leaders of the separatist “Novorossiya” movement in occupied Donbas and have hastily created Cossack fighting squads at almost every church. Ostensibly, the goal of these militant organizations is to protect the local church from raids and seizures by so-called “Right Sector” fanatics (Argumentua.com, August 30, 2017). Indeed, as has been argued in the past (see EDM, June 2, 2015, September 13, 2018, June 25, 2019), the influence of the UOC-MP in Ukrainian affairs makes up an element of Russia’s “hybrid” (New Generation) war against Ukraine. The hosting of public events and the stimulation of pro-Russian sentiment is an integral part of Moscow’s fight by proxy. To take one instance, Alexei Garan, a professor of political science and the Director of the Democratic Initiatives Fund, pointed to a religious procession organized by the UOC-MP in early July 2016, in Kyiv, whose aim was to create provocations and political divisions between Ukrainian faithful over the war in Donbas, thus further “destabilizing the situation inside of Ukraine” (Argumentua.com, July 11, 2016). In the current context of the COVID-19 crisis, it is well to remember that the sources of Russian influence in Ukraine are many.

That said, it is important to underscore that there is no homogeneity of support for Russian policies inside the Cossack community (whether inside Russia or Ukraine)—not even within the Don Cossack Host, which itself is divided between the Kremlin-backed “registered” Cossacks and descendants of traditional centuries-old Cossack groupings (see EDM, April 9). One interview with Sergey Azhynov, a Cossack from the Don region who sought political asylum in Ukraine, highlights this: In 2013/2014, Azhynov had supported the protests against then–Ukrainian president Viktor Yanukovych. He publicly called on other Don Cossacks not to interfere in the war in Donbas. Those entreaties had limited success, however. In the interview, Azhynov noted that Cossack Ataman Nikolai Kozitsyn helped Russia recruit local volunteers in Luhansk and supplied them with weapons (Radio Svoboda, December 18, 2018). And yet, this alliance between Russian special forces and the Cossacks ultimately came with its own challenges for Moscow. The Cossacks in Donbas showed themselves to be too free-willed to remain subordinated to official power structures—to the point that the head of the separatist Luhansk People’s Republic, Igor Plotnikov, had to employ Russian private military companies to forcibly to repress the Cossack movements in 2014 (Radio Svoboda, May 21 2018). This experience illustrates why the Kremlin is presently so focused on trying to further institutionalize and force the Russian Cossack movement under state control; but it may also offer a potential lever of counter-influence over Russia for embattled Ukraine.