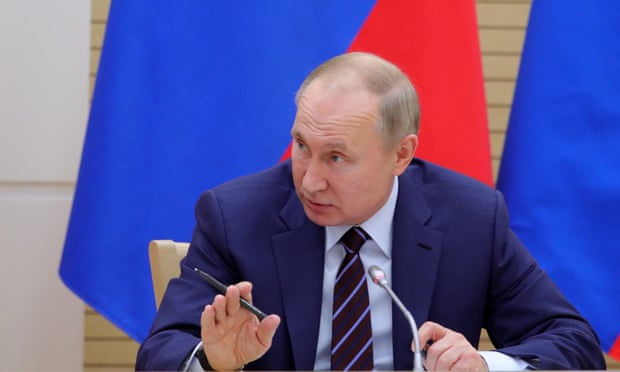 The Russian president has manipulated the levers of power to rule in perpetuity. That prospect is terrible for the west – and Russia

News that Vladimir Putin, Russia’s latter-day tsar, is making plans to cling to power indefinitely comes as no surprise. All the same, it is deeply worrying for Putin’s prey – principally the Russian people and the western democracies.

Putin, 67, has run Russia, as president and prime minister, for 21 years, a feat of political longevity surpassed only by Joseph Stalin. Like Stalin, he has made many enemies and caused untold misery along the way.

Russia under Putin’s grim tutelage has grown notorious for cronyism and corruption on a vast scale, repression of domestic opponents and free speech, and military aggression and disruption abroad.

Again like Stalin, retirement is not a safe option for the ruthless ex-KGB spy who normalised assassination as a modern-day tool of state policy. To yield power would be to invite retribution, legal or physical.

Yet it appears Putin does not want to emulate out-and-out dictators in other countries by making himself president-for-life – the path chosen by China’s Xi Jinping. He values a veneer of democratic legitimacy.

So under proposals unveiled last week, Putin could assume a newly powerful post of prime minister in 2024 when his presidential term ends. Or he could become chair of the State Council, a body he created. Both jobs can be held indefinitely.

Putin also has options to be speaker of the Duma (parliament) or leader of its main party, United Russia, thereby exercising power behind the scenes in the manner of Jaroslaw Kaczyński, leader of Poland’s Law and Justice party.

Whatever he chooses to do, the powers of any presidential successor will be clipped, there will be new term limits, and the ability of hostile oligarchs and emigre Russians – 7% of the population – to challenge him will be curbed.

The accompanying, enforced resignation of the entire government, including the prime minister, Dmitri Medvedev, is Putin’s attempt to reset his administration before Duma elections next year. Analysts say he feared Medvedev’s unpopularity – he has been accused of corruption – was beginning to rub off on him.

His appointment as prime minister of a non-politician, Mikhail Mishustin, an old ice hockey chum and pliable tax chief, is meanwhile seen as a clumsy way of denying a platform to potential rivals.

Although these changes are dressed up as desirable constitutional reforms, they clearly serve one common purpose: establishing Putinism in perpetuity. By showing he has no intention of retiring, Putin hopes to nip a possible succession battle in the bud.

All this may be good for Putin, but it is thoroughly bad for Russia. In any free and fair election, his criminal legacy of economic incompetence, abuse of power and shameless venality would be sure to sink him without trace. But free and fair elections now look ever more remote, especially following the brutal suppression of pro-democracy protesters in Moscow last summer.

On the contrary, Putin grows ever more intolerant of any form of actual or suspected opposition, whether it be in the form of civil society organisations, the media, or courageous, much persecuted activists such as Alexi Navalny.

Thanks to Putin’s mismanagement and neglect, Russia’s economy is in terrible shape, over-reliant on energy exports, lacking foreign investment and suffering chronic capital flight. That’s because businesses cannot rely on the rule of law to safeguard their dealings or prevent attempts at extortion, kickbacks and bribery.

Putin’s supposedly transformative national spending projects worth an eye-watering $390bn have largely failed to materialise. His promises of economic modernisation and raised living standards must be set against a consecutive five-year fall in real wages and cuts to state pensions.

At the same time, it is crystal clear Putin fears the sort of political liberalisation that might facilitate greater economic competitiveness and international investment. On the contrary, his latest proposals seek to further limit foreign influence.

The continuing drag on Russia’s development caused by western sanctions, imposed after the illegal annexation of Crimea, symbolises the broader, negative aspects of perpetual Putinism.

Putin not only refuses to get out of Crimea but actively fuels the separatist conflict in eastern Ukraine. And this conflict is but a smaller version of the murderous mayhem wrought by Russian forces in Syria since 2016, where killing and mass displacement continue in Idlib.

Putin is in cahoots with Turkey’s leader, Recep Tayyip Erdoğan, and his campaign against pro-western Kurds in north-east Syria. More recently, he has inserted Russian mercenaries into the war in Libya, backing rebels against the UN-recognised government in Tripoli.

Russia’s baleful influence under Putin extends further, to covert influence-peddling in the Balkans and eastern Europe, attempts to divide the EU, cyber attacks on the Baltic republics, and disinformation campaigns to subvert democratic processes in Britain and the US.

Russian vetoes have reduced the UN security council to irrelevance on key issues. Putin’s poison meanwhile seeps through other western institutions, bamboozling Donald Trump, weakening the Nato alliance and the G7 (from which he has been banished), and undermining European democracy with his glib talk about “obsolete” western liberalism.

And speaking of poison, who doubts that Putin and his henchmen were behind the unpunished attempt to assassinate Sergei and Yulia Skripal in Salisbury and last year’s murder of a Chechen separatist in Berlin?

Vladimir Putin is a man of many faces: macho patriot, rightwing populist, cynical manipulator, and ruthless global warlord. All are inimical to the best interests of the Russian people. All are fundamentally hostile to western the principles of freedom and democracy.

The prospect of Putin prolonging and strengthening his nihilistic reign is a terrible one. Putin’s is the face of the enemy. Henceforth he must be recognised as such.