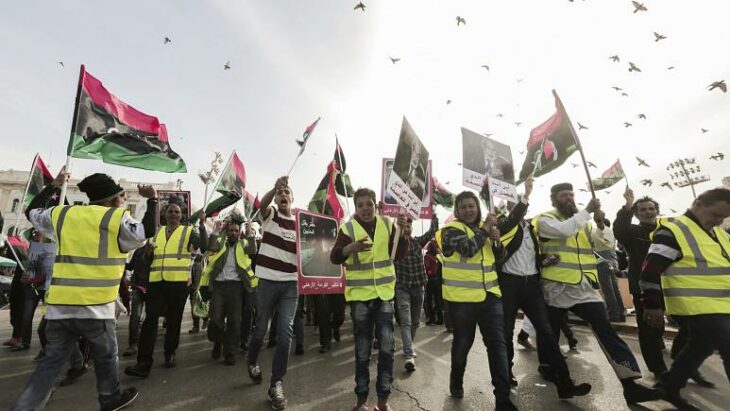 Libya’s Government of National Accord (GNA) has called out foreign interference in the country’s civil war, claiming Russian mercenaries have been involved in the fighting.

Libyan and US officials say those contract fighters are from a paramilitary organisation called the Wagner Group, which is associated with an oligarch close to Russian President Vladimir Putin.

The AP reports Wagner Group contractors are accused of fighting alongside General Khalifa Haftar, who along with the support of the United Arab Emirates and Egypt is laying siege to the internationally-recognised interim government in Tripoli.

Moscow has repeatedly denied any direct involvement in the conflict but these mercenaries “operate under the control of the Russian security services and military, and without a hint from the Kremlin, do not move,” Pavel Felgenhauer, an analyst and editor at Novaya Gazeta, told Euronews.

What is the Wagner Group?

One of a number of private military groups from Russia, the Wagner Group emerged out of the conflict in the Donbas in eastern Ukraine, when pro-Russian forces rose up against the Ukrainian government.

People with ties to the Wagner group previously told Reuters news agency that it has carried out clandestine combat missions on the Kremlin’s behalf in Ukraine and Syria. Russian authorities deny Wagner contractors carry out their orders.

The oligarch considered to be the head of the Wagner Group — Yevgeny Prigozhin, a businessman with ties to Putin — has repeatedly denied any connection with the group.

The US imposed sanctions on him after it accused him of trying to meddle in its 2016 presidential election and the 2018 congressional elections.

Prigozhin has denied any links to Wagner and has declined to comment on the US allegations, calling them a “private matter” for the US Treasury.

Pavel Felgenhauer, columnist and defence analyst at the independent Russian newspaper Novaya Gazeta, told Euronews the Russian contract workers from Wagner are not like their American counterparts.

“They participate in battles,” he said, and “are used in elite strike units”, unlike American defence contractors whose main duties are to guard.

“In Russia, there is a huge pool of such people willing to fight. Basically, they are veterans of Donbas. Nowadays in Donbas, they do not fight very much and, most importantly, they aren’t paid well. That’s why they are looking for a place to earn money because it’s hard for them to earn in another way.”

While by some international standards the money they make isn’t a huge amount, they can earn a few thousand dollars a month as a fighter, more as commander and their families will receive less than €50,000 in the event of their death.

Felgenhauer said in Russia being mercenary is a criminal offence, and there are officially no private military companies. “But, of course, they operate under the control of the Russian security services and military. Without a nod from the Kremlin, they do not go to war, even if the Kremlin denies it and says they do not know anything.”

Using Wagner Group fighters achieves a number of aims for the Russian government, he said. They are willing to go in and fight to the death, as the money is a lot for families from their Russian provinces. Also, “a dangerous element is being withdrawn from Russia” – they are highly trained fighters, who could conceivably one day pose a political threat back home.

And finally, he added, they allow the Kremlin to pursue its foreign policy aims with plausible deniability at the same time, “because Russia will not officially interfere in Libya.”

“Russia has relations with both Haftar and the GNA. The GNA also supports Erdoğan. And Erdoğan and Russia will not fight over Libya. This would lead to a serious crisis in Syria, and Turkey is more strategically important for Russia than Libya,” Felgenhauer told Euronews.

In Libya, according to Lorenzo Cremonesi, a correspondent at the Corriere newspaper, Russians keep away from the frontlines, instead operating as snipers from distance, drone pilots or as trainers for Haftar’s soldiers.

According to Foreign Policy, the group fell into disgrace after the Syrian offensive and has recently been trying to find work in Africa in the training of local militias and with contracts for private security. Three Russian journalists who were investigating Wagner’s presence in the Central African Republic were murdered in the summer of 2018. Others were threatened.

The head of the Higher Council of the State of Libya, Khaled al-Meshri, says the UN-recognized GNA is to submit a list of names of mercenaries found fighting in the country to the Russian government.

David Schenker, the US Assistant Secretary for the Affairs of the Near East, announced that the US is working with European partners to impose sanctions on the Russian contractor, citing “the spectre of large-scale civilian killings” by the Wagner Group.