On Sunday, the Coast Guard in Charleston, SC issued a maritime safety information bulletin about the Leonov, described as a Russian AGI, or auxiliary general… 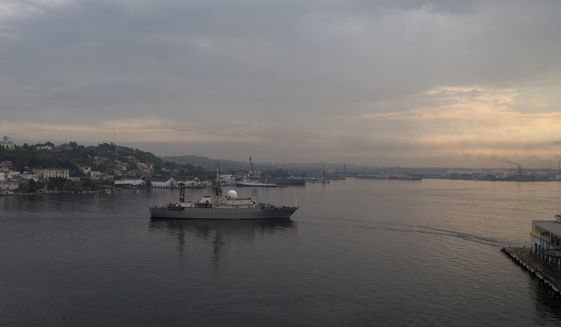 On Sunday, the Coast Guard in Charleston, SC issued a maritime safety information bulletin about the Leonov, described as a Russian AGI, or auxiliary general intelligence ship.

“The United States Coast Guard has received reports indicating that the RFN Viktor Leonov (AGI-175) has been operating in an unsafe manner off the coast of South Carolina and Georgia,” the notice said.

“This unsafe operation includes not energizing running lights while in reduced visibility conditions, not responding to hails by commercial vessels attempting to coordinate safe passage and other erratic movements.”

A Coast Guard official in Charleston confirmed the notice and said there has been no update since it was issued.

The notice said vessels sailing near George and South Carolina should “maintain a sharp lookout and use extreme caution when navigating in proximity to this vessel.”

The Leonov has regularly conducted intelligence gathering operations along the East Coast for several years, monitoring the large naval base at Norfolk, Va., as well as the submarine base at Kings Bay, Georgia.

Joint Base Charleston is used by the Air Force and Navy.

The last time the Leonov was along the East Coast was in March of 2018 when it was tracked near Kings Bay.

U.S. officials have said the mission of the Leonov is to gather intelligence on nuclear missile submarines and other Navy facilities.

Interest by U.S. intelligence in the Russian ship has increased since Russian President Vladimir Putin revealed in March 2018 that one of several superweapons being developed by Moscow is a high-speed underwater drone code-named Kanyon by the Pentagon that will be armed with a very large nuclear warhead.

The Leonov is likely conducting operations related to future use of the Kanyon, known as the Status-6 in Russia, that will be capable of destroying entire ports and harbors.

Navy Capt. Pamela Kunze said the North American Aerospace Defense Command and Northern Command closely track vessels of interest, including foreign ships like the Leonov, in their area of responsibility.

“We are aware of Russia’s naval activities, including the deployment of intelligence collection ships in the region,” she said. “While we won’t discuss specific measures being taken, NORAD and USNORTHCOM routinely conduct air and maritime operations to ensure the defense of the United States and Canada.”