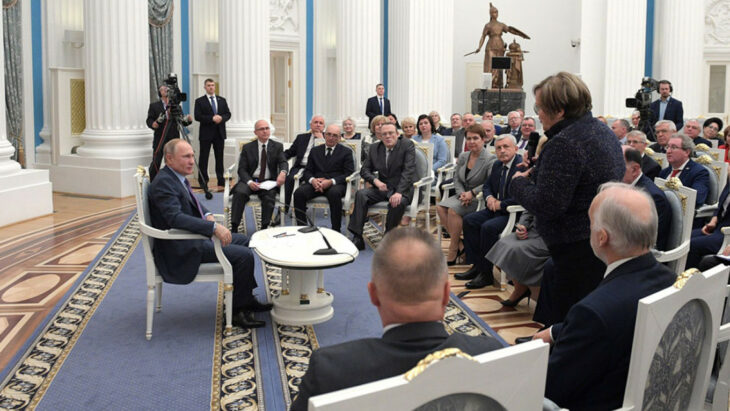 Here are three of Putin’s quotes from his meeting to mark Human Rights Day:

— “So they throw a plastic cup at an authority, and that’s OK. Then a plastic bottle, that’s OK too. Then it’s a glass bottle, [then] a stone and then they start shooting and looting stores. We must prevent that.”

— “There are also so-called arbitrary excesses, which are in fact gross violations of the law by various law enforcement agencies too. Of course, everything needs to be measured and certain boundaries can’t be crossed.”

On the specter of genocide in eastern Ukraine:

— “The amnesty law [in Ukraine] still hasn’t been passed. While the Ukrainian side keeps insisting: ‘Give us the opportunity to close the border using our troops.’ But I can imagine what would happen next. There would be Srebrenica*, as simple as that.”

* Bosnian Serbs killed more than 8,000 Muslim men and boys in the town of Srebrenica during the 1995 Bosnian war in the worst mass slaughter in Europe since World War II.

— “[Lenin] invented and created a state structure, having laid a mine under Russian statehood that’s been developing for 1,000 years.”

— “I won’t go into this now, I have my own point of view on this matter. This is neither the time nor the place to expound, and perhaps I will expound in more detail.”

Reuters contributed reporting to this article.