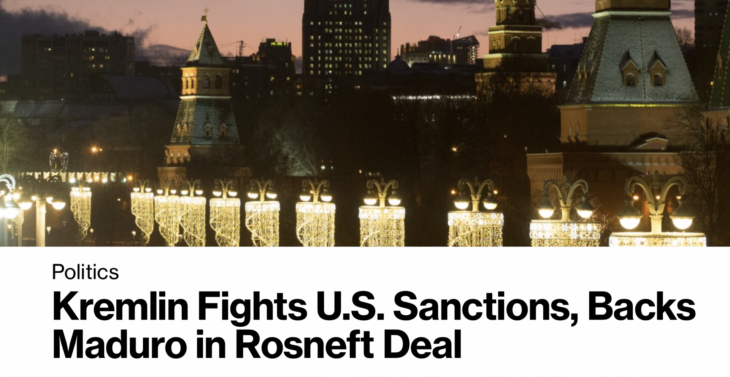 By Henry Meyer and Ilya Arkhipov

“Russia is not walking away from Maduro and will seek to thwart U.S. efforts to depose him,” said Vladimir Frolov, a former diplomat and foreign policy analyst in Moscow. “Moscow is just shielding Rosneft from sanctions which could result in a blanket embargo on all Rosneft exports.”

Fears of broader sanctions have grown after the U.S. in recent months slapped restrictions on Rosneft trading companies for handling business with Venezuela. More recently, the U.S. has hinted that it might step up pressure on the Russian oil sector to reduce production. That followed Moscow’s decision early this month not to deepen output cuts agreed with OPEC led Saudi Arabia to boost output, flooding the market and pushing prices to the lowest levels in decades.

The administration of President Donald Trump has already reached out to Saudi leaders to reconsider their strategy, which has battered producers in the U.S. with low prices.

Rosneft late Saturday announced it’s turning over its Venezuelan projects to an unnamed state-owned company in what it called an effort to protect its shareholders’ interests. Rosneft, which produces 40% of Russian oil and 5% of world output and has substantial exposure in the western financial system, can’t afford the risk of broad U.S. sanctions that could cripple its operations. Earlier this month, a Chinese company said it wouldn’t buy crude from Rosneft because of the risks caused by the sanctions on the trading companies.

“As recently as February, the Venezuelan business was profitable, which offset the sanctions risk,” said Ivan Timofeyev, an analyst at the Kremlin-founded Russian International Affairs Council. “Now the desire to avoid sanctions coincided with the need to avoid losses” after oil prices plunged, he added.

The Russian giant has already cut its exposure under multi-billion-dollar prepayment deals reached several years ago. Venezuela’s oil producer PDVSA owes Rosneft only $800 million at the end of the third quarter of 2019, according to the last available data, down from $4.6 billion at the end of 2017.

The latest Russian maneuver mirrored its strategy in 2018 when it used Promsvzyabank to set up a new banking vehicle to serve the defense industry after state-owned weapons producers came under U.S. sanctions, thereby shielding the country’s two largest banks, government-controlled Sberbank and VTB. Unlike those big lenders, which have significant exposure to western financial institutions and thus are at risk from sweeping U.S. sanctions, the new special entity operated largely out of Washington’s reach.

While Rosneft may even push to have the recently imposed sanctions on the trading units lifted, risks remain.

“Rosneft is trying to stay out of the firing-line but nothing stops the Americans from finding another pretext to sanction it,” said Fyodor Lukyanov, who heads the Council on Foreign and Defense Policy, a research group in Moscow that advises the Kremlin.

“Russia understands that Maduro is in an awful situation, especially with oil prices at rock bottom,” he said. “But Putin’s psychology is that you should stick with partners in difficulty.”

Maduro said on state TV on Saturday evening that ”President Putin sent me a message through his ambassador reaffirming their strategic and integral support to Venezuela in all areas.”

Frolov said, “Moscow thinks that Maduro is actually winning the fight with the opposition and is likely to split it to the point where he would be able to win parliamentary elections this year.” Russia has backed Maduro even as the U.S. and its allies back opposition leader Juan Guaido.

For Rosneft, the deal also could give management, led by Igor Sechin, its influential chief executive, greater control, since the company is receiving 9.6% of its own shares in the transaction. That may mean the government’s share in Rosneft falls below a controlling stake, according to Andrey Polischuk, Moscow-based analyst for Raiffeisenbank.

Neither the company nor the government would comment on whether the deal will bring state ownership below 50%.

“Sechin gets Rosneft shares and Putin gets the chance to trade with Trump,” said Konstantin Simonov, head of the National Energy Security Fund in Moscow.

With assistance by Dina Khrennikova, Olga Tanas, and Patricia Laya