MOSCOW—President Vladimir Putin of Russia proposed constitutional changes that could enable him to wield political power after his presidency ends, as his longtime ally, Prime Minister Dmitry Medvedev, unexpectedly resigned.

The changes laid out by Mr. Putin on Wednesday would limit the power of a potential successor after 2024, when he is required by law to step down. He also proposed boosting the role of the State Council, which he already heads.

As head of an empowered State Council, Mr. Putin could remain in control and guide policy after his presidential term expires.

“It’s not clear what role he will play, what will his status be. The only thing which is clear is that he will keep his role as the No. 1 person,” said Aleksei Chesnakov, a political analyst and former Kremlin aide.

Mr. Medvedev’s resignation represents the biggest shake-up in the Russian government in nearly a decade, as Mr. Putin has tried to project an image of stability despite a worsening economy and increasing layers of Western sanctions.

Mr. Putin, in his annual State of the Union address on Wednesday, said the proposed changes to Russia’s constitution would be put to a vote, “given that they reflect fundamental changes to the political system.” The vote could take place before the summer, Russian news agencies reported, citing an unnamed official.

The proposals would give parliament the authority to confirm the prime minister and the government cabinet, taking some powers away from the office of the president.

Mr. Putin also suggested that the status of the State Council be enshrined in the constitution, where it would likely be listed as an arm of the executive branch.

Mr. Putin, 67 years old, is looking for ways to remain influential in Russia, whether he steps down or contrives another way to prolong his official position at the top, said Thomas Graham, a distinguished fellow at the Council on Foreign Relations in New York.

“He wants to be in control of the process,” Mr. Graham said. With possible constitutional changes ahead, “he gives himself a number of options by which he can do that.”

Mr. Putin proposed that Mikhail Mishustin, a relatively unknown technocrat who has worked as head of Russia’s tax service since 2010, become the next prime minister, according to state news agencies. The Russian state Duma, or lower house of parliament, is set to consider his candidacy on Thursday.

Mr. Medvedev, whose cabinet also resigned, will stay on as prime minister until a new government is formed, Mr. Putin said on state television. He said Mr. Medvedev would be offered a newly created post of deputy chairman of Russia’s security council—a relatively minor role.

“Under these conditions, I believe it would be right for the government of the Russian Federation in its current state to resign,” said Mr. Medvedev, sitting next to Mr. Putin.

While some autocratic leaders have changed constitutions to remain in power indefinitely, Mr. Putin has followed the letter of the law. In 2008, he stepped down as president and became prime minister while Mr. Medvedev served as president for four years.

Mr. Putin is following a model started by longtime Singapore leader Lee Kuan Yew, who slowly left power, taking on more of a guardianship role in his country toward the end of his life, some analysts said. Longtime Kazakhstan President Nursultan Nazarbayev left his post last year to take up the head of a newly created Security Council.

“A transition of power has already begun,” said Valery Solovei, an independent political analyst. “But Mr. Putin likely doesn’t want to be in the spotlight anymore. After 20 years as leader, he likely wants to rule more from the shadows.”

Some other analysts say Mr. Putin is wary of staying in power for too long and wants to care for his legacy while still alive.

A constitutional overhaul proposed by President Vladimir Putin could allow him to continue to control the levers of power, position allies to assume senior posts and sideline others. Here are some top officials. 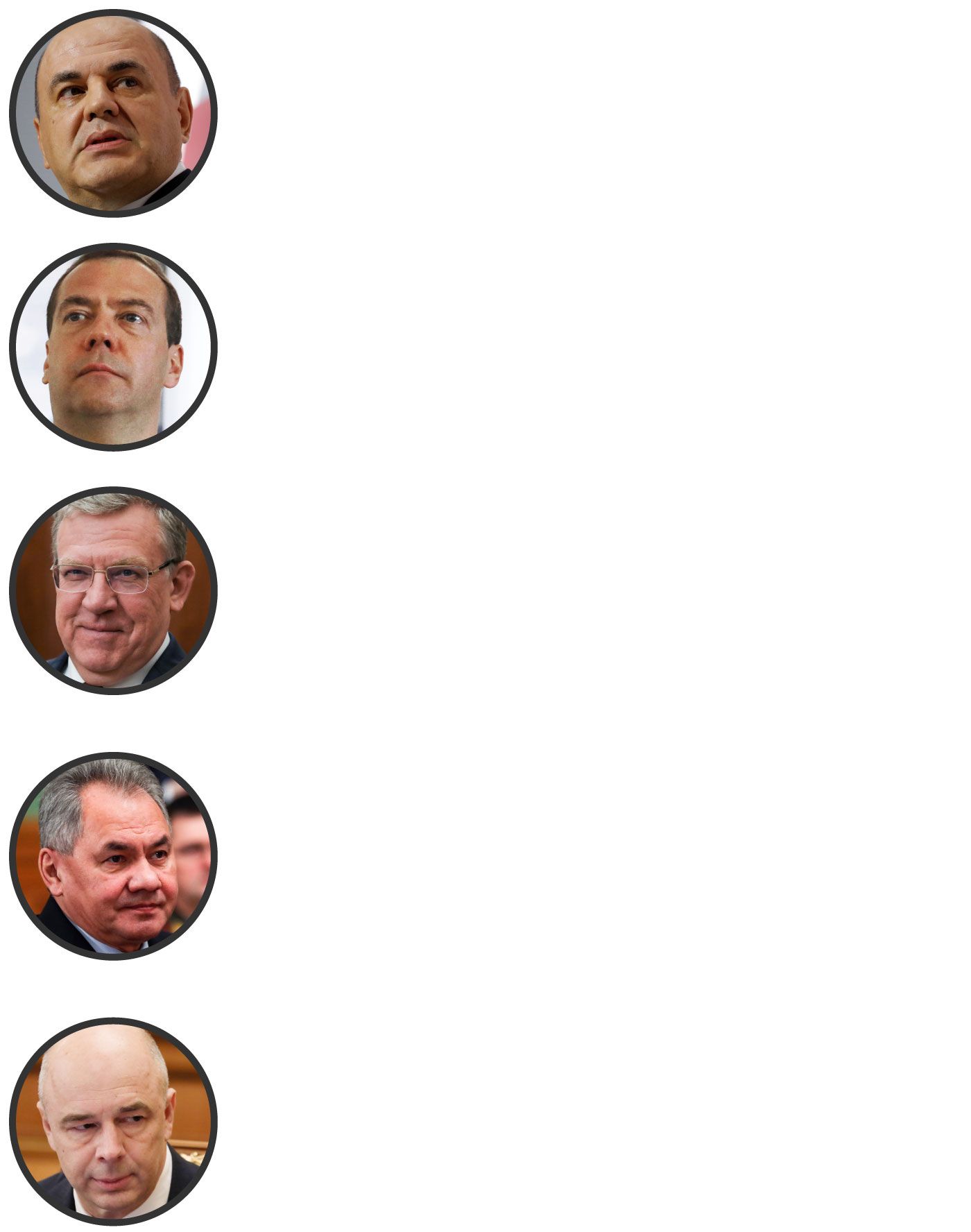 Mikhail Mishustin, whom Mr. Putin proposed as the next prime minister, is a relatively unknown technocrat who has headed Russia’s tax service since 2010. He has carried out extensive changes in the agency that raised revenue and was credited by observers with cleaning up rampant corruption in the system. Before that job, he ran an investment group and worked in the tech industry. His lack of experience or a real power base may make him a more malleable figure as prime minister, analysts say.

Dmitry Medvedev, the longest-serving prime minister in post-Soviet history, abruptly resigned from the post Wednesday. His popularity has waned inside Russia in recent years, largely owing to economic stagnation. A lawyer by training, Mr. Medvedev worked in St. Petersburg’s City Hall for five years under Mr. Putin from 1990-95. He swapped roles with Mr. Putin in 2008 and served a single term as president, before standing aside to allow Mr. Putin to return to the Kremlin in 2012.

Alexei Kudrin has been a longtime friend of Mr. Putin since the two worked together in the St. Petersburg mayor’s office in the 1990s. Mr. Kudrin worked as finance minister from 2000-11, winning praise from foreign economists for his macroeconomic policies. He resigned after a conflict with Mr. Medvedev over military spending. Since 2018, he has headed the Audit Chamber, a government watchdog with limited powers. He has long been an outspoken advocate of liberal economic reforms.

Sergei Shoigu has seen his star rise since 2012, when he became defense minister and oversaw a wide-reaching overhaul of the armed forces. Those changes have seen the Russian military play a key role in Moscow’s increasingly aggressive foreign policy in Syria and the broader Middle East. Mr. Shoigu is one of the few politicians in the cabinet with an independent power base—mostly within the defense industry—but he has often been photographed on vacation with Mr. Putin, leading many to believe he doesn’t pose a threat to the president.

Anton Siluanov was a little-known bureaucrat when he was appointed as minister of finance and Russia’s first deputy prime minister in 2011. Many at the time dismissed him as a short-term fill-in, but he has since grown in stature and has worked to keep a tight budget. He also spearheaded efforts to de-dollarize Russia’s economy, an effort aimed at softening the blow from U.S. sanctions.

Reaction in Washington appeared muted, with officials focused on the results of Tuesday’s Democratic presidential debate and the coming impeachment trial of President Trump in the Senate. Mr. Putin’s announcement in 2011 that he would run for president the next year drew disapproval from Washington, which had expressed hopes that Mr. Medvedev would be allowed another term in office. Instead, the two men swapped posts.

Mr. Medvedev was likely ousted from the premiership by Mr. Putin, some analysts said. The president saw the biggest street protests against his rule in nearly a decade over the summer as Russians felt the sting of chronic economic problems and falling living standards.

While Mr. Putin has made decisions about defense and foreign policy, Mr. Medvedev has been responsible for domestic and economic policy.

“Medvedev had become quite toxic and unpopular for Russian people,” said Tatiana Stanovaya, founder of R.Politik, a political analysis firm.

As Mr. Putin embarks on a potential transition from the presidency, he will need a figure who he can trust, she said.

“This is an unexpected divorce between Putin and Medvedev,” Ms. Stanovaya said. “Putin is looking for somebody who can help implement his constitutional reform, through which he will want to control his future successor. And it appears Medvedev is not that person.”

Mr. Mishustin, 53, has made extensive overhauls in the tax agency that have helped raise revenue and clean up corruption in the system, analysts said.

He is relatively unknown, which could be one of the reasons Mr. Putin proposed him, said Abbas Gallyamov, a former speech writer for Mr. Putin and a political consultant based in Moscow.

“That might satisfy the public’s desire for new faces,” Mr. Gallyamov said. “He is a technocrat and Russia definitely needs economic reforms.”

Russian stocks on the Moscow Exchange initially fell on the news of Mr. Medvedev’s resignation but quickly regained ground, with the MOEX Russia Index, the main ruble-denominated stocks benchmark, trading flat. The ruble was down slightly against the dollar.

Mr. Medvedev served as president from 2008-2012 and as an increasingly unpopular prime minister since then. While Mr. Putin’s approval ratings have remained well above 60% despite the country’s economic problems, approval of Mr. Medvedev stands at 38%.

Mr. Medvedev has been known for some awkward appearances in public. In 2016, responding to questions about low pensions by locals in the Crimean peninsula, which Russia had annexed from Ukraine two years earlier, he responded: “There just isn’t any money now….You hang in there.”

Mr. Medvedev’s departure sets the stage for a new team of players in the government, which has long been seen as out of touch with Russians.

“This creates a feeling of renewing power and its readiness to solve larger tasks because the society has the impression that the government is not able to solve the large-scale tasks that are being set now,” Mr. Chesnakov said.