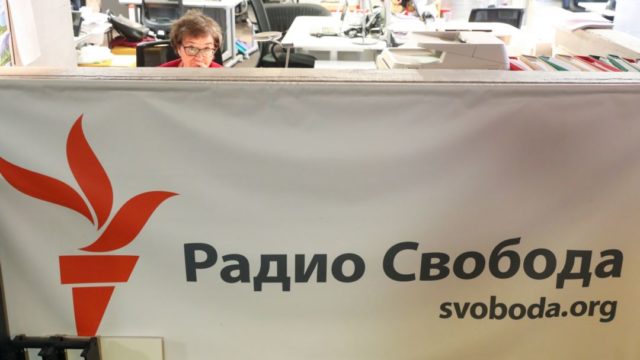 After two decades of restrictions and harassment, President Vladimir Putin’s government is on the verge of forcing Radio Free Europe/Radio Liberty (RFE/RL) to shut down its operations in Russia. The prospect sets up an immediate test for the new administration in the United States: can President Joseph Biden save one of the biggest news sources in Russia that is not under Kremlin control?

It is somewhat remarkable that RFE/RL, a private company financed by the US Congress and based in Prague, has survived at all in Putin’s Russia. Its Moscow bureau employs about 50 people, almost all of them Russian citizens. Some 250 freelancers report from across the country. When Russians demonstrated Saturday (January 23) for the release of Alexei Navalny, the bureau streamed live video coverage to Russian audiences (Svoboda.org, January 23, 2021). RFE/RL runs local news sites in several Russian regions and is active on social networks (see EDM, June 24, 2020; see Commentaries, June 26, 2013). Its current news coverage includes COVID-19 in Russia, environmental issues and corruption.

Putin has been stepping up pressure for years on the bureau, which his predecessor, Boris Yeltsin, allowed to open in 1991. Under Putin’s rule, the government has revoked RFE/RL’s radio frequencies in Russian cities, harassed its reporters and accused the company of being a subversive organization. In 2017, the State Duma (lower chamber of the Russian parliament) began passing a series of “foreign agent mass media” laws that have been applied almost exclusively to RFE/RL and the Voice of America. (VOA has a Russian service, but minimal staff inside Russia.)

The Kremlin’s latest legal moves now threaten RFE/RL in Russia as never before. The authorities have declared some RFE/RL contributors individually to be foreign agents—for many Russians, a term virtually equivalent to “spies.” Meanwhile, the state telecommunications regulator, Roskomnadzor, has demanded that every RFE/RL news article declare, in type twice the size of the article’s text, that it was produced by foreign agents. Every video is to start with a similar warning, shown for 15 seconds (Roskomnadzor, September 23, 2020). RFE/RL fears that agreeing to these demands would destroy its reputation as an independent news source, intimidate its audience and encourage even more draconian laws.

Roskomnadzor filed initial charges this month against RFE/RL for non-compliance with the labeling rules (Interfax, January 12, 2021). Fines in these cases could come within days, and more such charges could bring total penalties to hundreds of thousands of dollars. Individual RFE/RL staffers could potentially face criminal charges.

The forced closure of RFE/RL’s Moscow bureau would deal the new Biden administration a high-profile humiliation at the very start of its dealings with Russia. To prevent this, Biden’s team will have to review what inducements or threats it can deploy immediately to make Moscow stay its hand.

Though publicly dismissing any “reset” in bilateral ties, the new US administration has hoped to stabilize relations with the Kremlin, likely beginning with the renewal of the New START strategic arms control treaty. But with the Congress already talking about new sanctions to defend RFE/RL (House.gov, January 22), prospects for quick progress on nuclear weapons limits and other fronts could be at risk. Negotiating with Moscow on media issues is particularly tough. US diplomats and press freedom organizations have worked arduously to defend RFE/RL on previous occasions; but no magic bullets have ever appeared.

In addition, more than Russia hangs in the balance in this dispute. The administration’s response to Moscow will surely be watched by authoritarian leaders in other countries who would also like to shut down VOA, RFE/RL and other US international broadcasters on their territory.

One prominent proposal has been for the administration to defend RFE/RL by threatening action against Russia’s RT television and Sputnik radio in the United States. Those outlets have enjoyed lopsided advantages for years, broadcasting freely on cable, AM and FM, while RFE/RL is barred from radio and TV in Russia.

However, retaliation against RT and Sputnik in the United States would bring claims of censorship, not only from the right- and left-wing US audiences the two outlets have cultivated but from advocates of free media. Russian nationals working at the networks could be expelled, but many of the outlets’ staff are US citizens. Cable companies might also resist government attempts to control their offerings.

Shutting down RT and Sputnik might not even hurt Russia much. After years of perfecting other overt and covert ways to manipulate segments of US audiences (see Hot Issues, August 13, 2014), Russia may be willing to sacrifice its marquee outlets as the price for shutting down RFE/RL at home.

If RFE/RL’s bureau should ultimately be forced to close, Congress would still have an option: sharply bolstering the media company to retain its Russian audience. RFE/RL is skilled at gathering and verifying news at a distance; it is a trusted source of local news in Iran, Azerbaijan, Uzbekistan and other countries where its bureaus are barred. Increased Congressional funding could support additional staff as well as the opening of new RFE/RL offices on Russia’s periphery. Help may also be needed from technology firms and other US agencies if Russia tries to block it on the internet. (RFE/RL stopped shortwave broadcasts to Russia in 2016, since few Russians still have shortwave radios.)

Any departure of RFE/RL from Russia would highlight the fact that the US has almost no channels to the Russian people other than RFE/RL and VOA. Especially if relations with Moscow deteriorate further, Washington may decide to create new channels to communicate to Russians—with more pointed messages to Russian citizens than RFE/RL and VOA journalists can be expected to deliver (see Commentaries, November 13, 2020).

With skill and luck, the new administration may be able to convince the Kremlin that it stands to lose more than gain by acting against RFE/RL. At stake are the interests of seven million Russians who look to RFE/RL for accurate news every week.

Thomas Kent, a former president of Radio Free Europe/Radio Liberty, is a Senior Fellow at Jamestown. He consults to governments and NGOs on disinformation and Russian affairs. His book, Striking Back: Overt and Covert Options to Combat Russian Disinformation, was published by Jamestown in September.