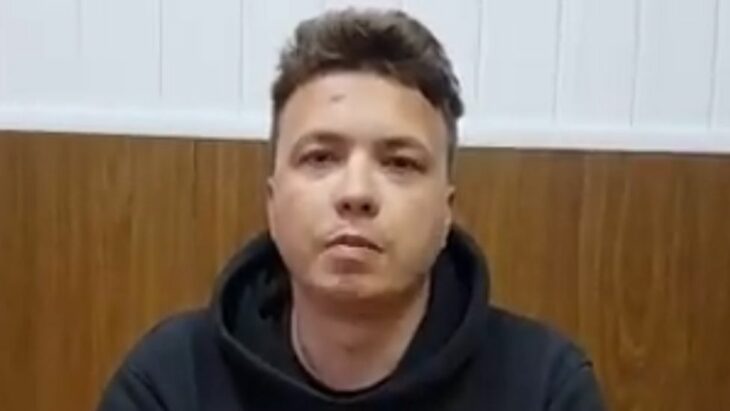 Several European airlines have said that they will not fly over Belarus, days after a dissident journalist was arrested on a flight diverted to Minsk.

Air France is the latest major carrier to ban overflights. Neighbouring Ukraine and Poland are stopping all flights to and from Belarus.

The Greece-Lithuania flight was rerouted over a supposed bomb threat.

Belarus authorities on Monday released video of Mr Protasevich that appears to have been recorded under duress.

He faces charges related to his reporting of last August’s disputed election and subsequent crackdown on mass opposition protests, and has said he fears the death penalty after being placed on a terrorism list.

Belarus is the only European country that still executes prisoners.

At a meeting in Brussels on Monday, the leaders of the 27 European Union member states called for the overflight ban, and promised further economic sanctions.

On Tuesday, the Belarusian transport ministry released a transcript of a conversation between an air traffic controller in Minsk and a pilot on Sunday’s Ryanair flight.

According to the transcript, which has not been independently verified, Belarus suggested several times that the plane should land in Minsk on “our recommendation”.

This appeared to contradict earlier statements from the Belarusian authorities that said the decision to land was made independently by the pilot.

What’s happening in the air?

At the Brussels summit, EU leaders told the bloc’s airlines not to fly over Belarus.

They have also asked member states to suspend operating permits for its national carrier Belavia.

Meanwhile Polish national airline Lot said it had suspended both overflights and flights to and from Minsk, and Ukrainian Foreign Minister Dmytro Kuleba said Ukrainian carriers were banned from flying over or into Belarus.

Belavia said it was suspending flights to the UK and France until 30 October.

Belarus, though not in the EU, borders three EU countries. Many flights to and from Asia as well as within Europe use its airspace.

Earlier on Tuesday, European Council President Charles Michel shared a map of air traffic taken from the flight tracking website Flightradar24 in which there appeared to be no planes in Belarusian airspace. Some flights, however, have continued throughout the day.

Some 400 flights use Belarusian airspace daily and 100 of these are by EU or UK carriers, according to the European air traffic agency, Eurocontrol. It has urged the airlines concerned to re-route through nearby countries.

A strong message, but how effective?

“Frightening Lukashenko with sanctions is doomed to failure,” declared one Russian newspaper this morning. “It only eggs him on.”

Then the character analysis: “He’s cultivated the image of a thuggish hooligan.”

It begs the question – can sanctions change a “hooligan’s” behaviour? Previous attempts have failed. European leaders clearly felt that after the fake bomb scare, the diversion of Ryanair Flight 4978 to Minsk and the arrest of a political opponent on board, they needed to send a strong message that such a brazen act was unacceptable. Hence the new sanctions. It’s unclear, though, how effective they will be.

Banning Belarusian airlines from flying over EU territory and calling on EU-based carriers to avoid Belarusian airspace is a financial blow to Minsk.

But Mr Lukashenko will almost certainly use this as an excuse to say to those around him – and to the Belarusian people – “Look, I told you so. The West is out to destroy Belarus, if not with bullets, then with sanctions.” He will use it to batten down the hatches even more tightly in the face of an alleged external enemy.

Might there come a point when those around the leader pause to consider where Belarus is heading – its isolation, the economic consequences of Mr Lukashenko’s policies, not to mention the brutality of the crackdown on his opponents?

As long as Moscow is backing him, Mr Lukashenko will feel confident of riding things out.

What prompted the flight bans?

Belarus sent a fighter jet to force Ryanair flight FR4978 – which had departed from the Greek capital, Athens, and was bound for Vilnius in Lithuania – to land, claiming there was a bomb threat. It touched down in the capital Minsk at 13:16 local time (10:16 GMT) on Sunday.

Police then took Mr Protasevich away when the plane’s 126 passengers disembarked. The activist, who witnesses said was “super scared”, was arrested along with his girlfriend Sofia Sapega.

The incident has drawn sharp condemnation from across the world, with countries urging the immediate release of Mr Protasevich and a full investigation.

Ms Sapega’s mother told the BBC that the 23-year-old had been taken to a Minsk jail, adding that the last word she managed to write on her WhatsApp messaging account was ‘Mummy’. The accusations against her are unclear.

“I don’t know what they can charge her with. For going on holiday with Roman Protasevich? It’s his life. What he does is exclusively his choice,” she said.

Belarus said the flight had been diverted because of a bomb threat from the Palestinian militant group Hamas.

Dozens of Belarusian officials, including President Alexander Lukashenko, are already under EU sanctions including travel bans and asset freezes, imposed in response to the repression on opponents.

The 66-year-old leader has cracked down on dissenting voices since winning a disputed election last August. Many opposition figures have been arrested, while others fled into exile.

Who is Roman Protasevich, and what has happened to him?

Mr Protasevich is a former editor of Nexta, a media operation with a Telegram channel. He left Belarus in 2019 to live in exile in Lithuania. From there he covered the events of the 2020 presidential election, after which he was charged with terrorism and inciting riots.

Nexta played a key role for the opposition during the vote. It has continued to do so in its aftermath, particularly with the government imposing news blackouts.