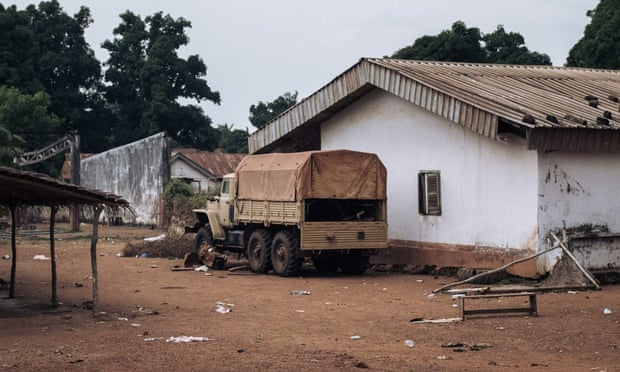 Russian mercenaries from the Wagner group, a private military contractor, have committed human rights abuses in the Central African Republic while fighting alongside government forces, according to a group of independent UN experts.

The UN working group said it was “deeply disturbed” by the connections between Russian mercenaries and a series of violent attacks that have taken place in the CAR since elections in December.

The country has been racked by a renewed bout of civil war since an alliance of rebel factions launched an offensive. The elections were won by the incumbent president, Faustin-Archange Touadéra, who was sworn in on Tuesday, but led to intensified fighting earlier this year as the rebels sought to blockade the capital, Bangui.

According to the UN experts group, the Russian contractors work closely with the 15,000 strong UN peacekeeping mission that has been based in CAR since 2014. The United Nations multidimensional integrated stabilisation mission in the Central African Republic (MINUSCA) is tasked with protecting civilians and providing an environment to allow the country to build durable institutions.

The experts group said it was disturbed to discover the foreign mercenaries were in close contact with UN peacekeepers. There were regular meetings between UN staff and “Russian advisers”, visits by the Russians to MINUSCA bases and medical evacuations of wounded “Russian trainers” to MINUSCA facilities.

“This blurring of the lines between civil, military and peacekeeping operations during the hostilities creates confusion about the legitimate targets and increases the risks for widespread human rights and humanitarian law abuses,” said Jelena Aparac, the chair-rapporteur of the UN working group on mercenaries.

The experts said they had received reports of “grave human rights abuses and violations of international humanitarian law” carried out by Russian private military personnel operating jointly with Faca. In some cases UN peacekeepers were involved, they added.

The alleged violations include mass summary executions, arbitrary detention, torture during interrogation and the forced displacement of the civilian population, about 240,000 of whom have fled their homes because of fighting in recent weeks. There were increased attacks on humanitarian organisations, as well as forced disappearances, the UN expert group said.

“Unacceptably, there seems to be no investigations and no accountability for these abuses,” said Aparac. “The close connections between the various actors further jeopardises chances to any impartial investigation and ensuring accountability. Greater clarity on the roles of ‘international partners’ is urgently needed.”

The Russians identified by the UN are linked to Yevgeny Prigozhin, an oligarch who is an ally of Vladimir Putin. Washington has indicted Prigozhinfor interfering in the 2016 US election. It says he finances the Wagner Group and the St Petersburg troll factory. The FBI recently offered a $250,000 reward for information leading to his arrest.

The UN working group lists three “interconnected” Prigozhin entities active in CAR: Wagner, Lobaye Invest, a CAR-based mining firm specialising in gold and diamonds that has been sanctioned by the US; and Sewa Security Services, which guards the president and other top CAR officials.

The UN high commissioner for human rights (OHCHR) is investigating several incidents. In December Russian and Faca soldiers allegedly opened fire on a vehicle that failed to stop at a checkpoint in Ouaka prefecture, killing three and wounding 15. They were also implicated in an attack on a mosque in Bambari, the prefecture’s capital.

The rebels from a series of factions, which call themselves the Coalition of Patriots for Change (CPC), have also carried out atrocities, it is alleged. On 8 March they ambushed a convoy of government and Wagner troops in the village of Manga, on the highway between Bozoum and Bocaranga. Two Russian mercenaries were reportedly killed and a vehicle destroyed.

The rebel coalition is led by the former president François Bozizé, who seized power in a coup d’etat in 2003 and was ousted a decade later, plunging the country into a brutal sectarian war.

Bozizé fled abroad after being toppled in 2013 but returned in late 2019, raising fears that the former French colony could face renewed violence. He and other opposition leaders have refused to recognise Touadéra as the winner of the December polls, alleging fraud.

Government troops have now recaptured a series of towns along the strategic road linking Bangui to neighbouring Cameroon and are reported to be closing in on Bozizé’s stronghold. Officials have acknowledged the important assistance of “allied forces” in recent victories, a term usually referring to Rwandan troops or Russian mercenaries.

UN sources told Agence France-Presse in January that the coordination on the ground between UN peacekeepers, the Russian “military instructors” and 300 Rwandan soldiers sent as reinforcements in December on a bilateral basis was “pretty good”.

Leaked documents show the scale of Prigozhin’s operations in Africa. Moscow’s apparent ambition is to turn the region into a strategic hub. Prigozhin’s and Wagner’s activities are closely coordinated with senior officials inside Russia’s foreign and defence ministries, the documents suggest.

Prigozhin was unavailable for comment. He has shrugged off US indictments and has previously said the Wagner Group did not exist.