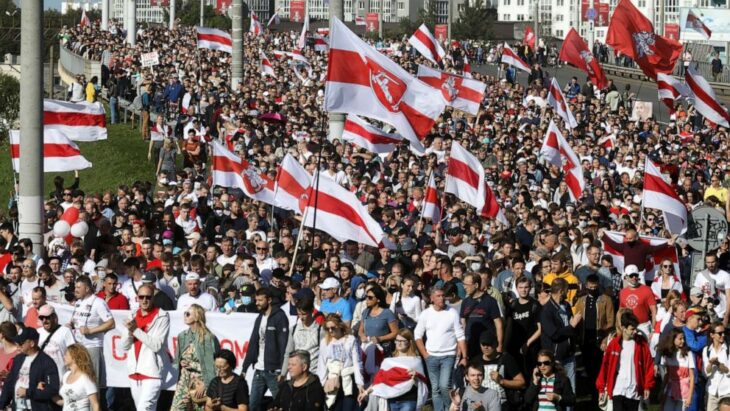 Belarusian opposition leader Svyatlana Tsikhanouskaya has designated February 7 the Day of Solidarity with Belarus, calling on international leaders, activists, journalists, and all friends of the country to support protesters who have been demanding the resignation of strongman Alyaksandr Lukashenka and new elections.

“Since the fraudulent presidential election of August 9, 2020, Belarusians have demanded democracy and freedom, staying persistent and courageous in spite of the regime’s lawlessness,” Tsikhanouskaya said in announcing the Day of Solidarity on her website.

Tsikhanouskaya suggested people show their solidarity with those who protest daily in Belarus “and thank them for their bravery and strong will.”

She recommended holding rallies, posting support on social media, writing letters to political prisoners, and lighting the facades of buildings in red and white — the colors of the Belarus opposition movement.

She also invited people to join an online solidarity conference on February 6, which included discussions on Belarus and the launch of the Belarusian People’s Embassies.

Czech Foreign Minister Tomas Petricek, who participated in the conference, told RFE/RL’s Belarus Service that the ministry would express its concern “about the repression that we still see in Belarus” to mark the Day of Solidarity.

He said, however, that there were currently no proposals for additional EU sanctions, but “Belarus remains high on the agenda, and foreign ministers regularly discuss what steps need to be taken.”

Tsikhanouskaya has called on the European Union and the United States to be “braver and stronger” in their actions to help end Lukashenka’s rule.

“The international response is still too modest,” she said on January 27 during an online event with several EU foreign ministers.

The United States and the European Union on February 5 said they backed the Day of Solidarity and hailed the demonstrators.

“We continue to be amazed by the exceptional strength, resilience, and courage of the Belarusian people in the face of unyielding repression,” State Department spokesman Ned Price told reporters.

“They continue to demand freedom and democracy. The world has been inspired by the people of Belarus, especially Belarusian women peacefully demonstrating for the right to have a voice in Belarus’s future,” Price said.

He added that the United States backed a “peaceful and inclusive dialogue” in Belarus.

The European Union issued a similar statement, saying that “many thousands” had been detained in Belarus and pointing to “hundreds of documented cases of torture.”

“The European Union continues to stand firmly with the people of Belarus,” said in a statement by EU foreign-policy chief Josep Borrell and enlargement coordinator Oliver Varhelyi, promising economic support for a democratic Belarus.

German Chancellor Angela Merkel, in her weekly podcast on February 6, said she had been “deeply impressed” by Belarus’s democracy movement.

“The calculation by those in power seemed to be that the world would forget these brave people. We cannot let that happen,” said Merkel, adding that the Belarusian government needed to put an end to violence against peaceful demonstrators.

Lukashenka’s declaration of victory in the election has sparked continuous protests that have seen tens of thousands take to the streets demanding he leaves.

Lukashenka, who has run the country since 1994, has denied any wrongdoing and refuses to negotiate with the opposition on stepping down and holding new elections.

Security officials have cracked down hard on the demonstrators, arresting thousands and pushing most top opposition figures out of the country. Several protesters have been killed in the violence and some rights organizations say there is credible evidence of torture being used against some of those detained.

The European Union, United States, Canada, and other countries have refused to recognize Lukashenka, 66, as the legitimate leader of Belarus and have slapped him and senior Belarusian officials with sanctions in response to the “falsification” of the vote and postelection crackdown.

With reporting by RFE/RL’s Belarus Service, dpa, and AFP