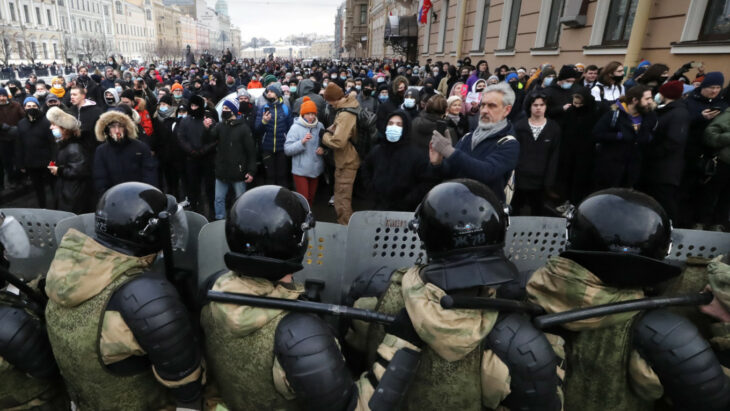 Tens of thousands of Russians joined unsanctioned protests across the country in support of jailed opposition activist Alexei Navalny for a second consecutive weekend, despite a week of crackdowns and threats of mass arrests.

Navalny was detained in mid-January on his return from Germany, where he had been recovering from a poisoning attack he blames on the Kremlin. He faces years in prison for a raft of criminal charges he says are fraudulent, despite calls from Western governments for his release.

In Moscow, the authorities took the unprecedented step of locking down the city center and closing metro stations, as hundreds of riot police played a chaotic game of cat and mouse with protesters.

“I came here because I want an end to this unlawful regime,” said Mikhail Zubnitskiy, a 43-year-old IT specialist. “We can’t go on like this much longer.”

Navalny’s allies initially called on supporters to gather in Lyubanka Square in central Moscow in front of Russia’s Federal Security Service (FSB) headquarters. However, on Sunday morning the center of the capital saw its heaviest police presence in years, prompting organizers to shift the location of the protest several times.

Three hours after the start of the protest, a large crowd made it to the notorious Matrosskaya Tishina (Sailor’s Silence) prison where Navalny is being held on alleged parole violations.

Authorities said around 2,000 had gathered for the protest in Moscow, which came after a week of intense crackdowns on key Navalny allies. They included the detentions of his key aide Lyubov Sobol and his brother Oleg Navalny, as well as strong warnings to Muscovites planning to attend the protest.

However, OVD-Info, an independent organization that monitors arrests, said that in Moscow alone over 1,500 people were arrested, with the nationwide tally of detentions at over 5,000, including 1,100 in St. Petersburg. Local independent media put turnout for the protest in Russia’s third city Novosibirsk at 5,000-6,000 and in its fourth city Yekaterinburg at 7,000 —both slightly bigger than last week.

While much of the country was still asleep, video and photos published by Navalny’s local headquarters showed Russians in the Far East capital of Vladivostok bypassing the police-cordoned city center and marched out onto the frozen surface of the Amur Bay, chanting “My Russia is in prison!” and writing “Putin is a thief!” in the snow.

In the Urals city of Yekaterinburg, huge crowds marched in the streets, according to an MT correspondent at the scene — with smaller groups fleeing the police by running across the frozen river that divides the city.

In the Siberian city of Krasnoyarsk, a photograph widely shared on social media showed a swarm of riot police encircling a small group of protesters. In Kazan, video footage shared by the Open Russia pro-democracy movement showed police forcing cowering protesters to lie face-down in the snow. In Chelyabinsk, MBKh Media tweeted a video of police pinning a protester to the ground as he said “I can’t breathe.”

In St. Petersburg, numerous media outlets filmed police brutally beating protesters and reported that they used tear gas and electroshock batons. In one video posted by the local Fontanka.ru news website, an officer was seen pulling his service weapon during a standoff with protesters.

“I was here last week, I am here today and I will be here every single day until Navalny and others are free. This is my duty,” said Igor, 34, an engineer attending the St. Petersburg protest.

Navalny has been pushing to keep the protest momentum going after last Saturday saw Moscow’s biggest unauthorized protests in almost a decade.

In a court hearing on Thursday he spoke by video link from Matrosskaya Tishina and described those planning to attend the protests as “true patriots of Russia” and the barrier stopping Russia from “slipping into complete degradation.”

Shortly after his speech, the court rejected Navalny’s appeal against his 30-day detention ahead of a hearing next week over whether he should face jail time for a years-old fraud case.

Later that day, a video Navalny released after his detention alleging that President Vladimir Putin is the owner of an opulent palace on the Black Sea coast hit 100 million views on YouTube.

“If 2% of those who watched the video will go to the streets, it will be enough to scare the authorities,” Navalny wrote in an Instagram post.

On the ground on Sunday, protesters were seen waving toilet brushes they had painted gold in a reference to a $700 toilet brush shown in Navalny‘s film about the mansion.

Following the Jan. 23 rallies in Moscow and several other cities, police launched over 20 criminal cases against individuals accused of calling for mass riots, violence against police, blocking roads and violating Covid-19 related public health rules. According to the Moscow City Court, 154 people were also placed under administrative arrest.

Cases have also been opened against 173 parents whose children allegedly took part in last week’s protests.

“All of this shows Putin and his friends are scared of us. The arrests only made me angrier and more determined to come out,” said Yelena, 53, who works as a psychologist in Moscow

Others, like Daniil, 21, a student at one of Moscow’s top universities who attended last week’s rallies but decided to stay at home today, told The Moscow Times that the authorities’ actions have made him change his mind.

“At this point, I think I am risking too much without a clear goal of what is achievable,” he said. “I could lose my place at university.”