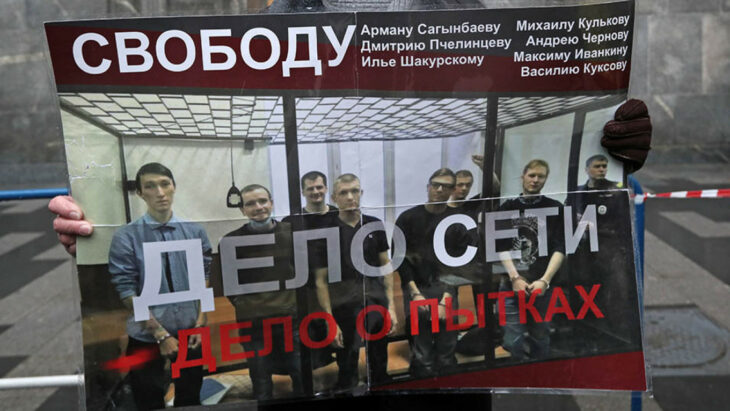 A court in central Russia has jailed members of an anti-fascist activist group for up to 18 years on terrorism charges, the Mediazona news website reported Monday.

Seven members of the group Set — Russian for “Network” — were detained in the city of Penza along with four other members in St. Petersburg in 2017. Investigators claim that they planned attacks during the 2018 presidential election and the football World Cup, while rights groups saythat the case is “fabricated” and based on testimonies obtained through torture.

A court in Penza has sentenced the seven members of Set to prison terms between six and 18 years, according to Mediazona.

The activists’ supporters chanted “freedom to political prisoners” in the courtroom after the judge read out the guilty verdict, according to video shared by the independent Novaya Gazeta newspaper.

The defendants have the right to appeal the sentences, a judge was cited as saying.

The jailed activists have accused security officers of torturing them into incriminating themselves. Russia’s Federal Security Service (FSB) responded to the allegations by saying it was a “professional necessity.”

The first member of the group to be sentenced, Igor Shishkin, was handed a three-and-a-half-year sentence in January 2019 after making a deal with investigators.

It was not immediately clear when the verdict will be read out in the St. Petersburg Set case.