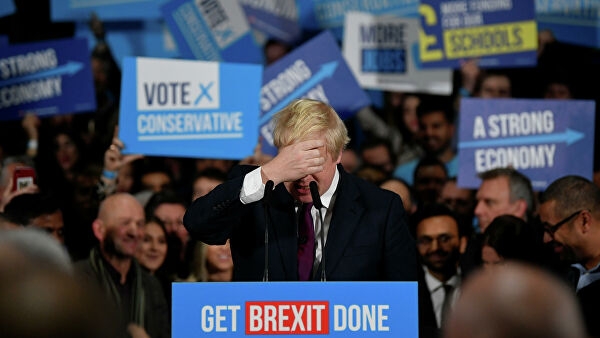 The red wall wasn’t so much breached as demolished. Workington, Stoke-on-Trent, Dudley, Blyth Valley and Bolsover: places in the north and Midlands that returned Labour MPs for generations have gone. With just a few results still to declare it is Labour’s worst election result since 1935 and the Conservative’s largest majority since Margaret Thatcher’s landslide in 1987.

Brexit and Jeremy Corbyn persuaded the party’s traditional voters to do something their forefathers would never have imagined possible: vote Tory in large numbers.

The result was worse than Labour had feared or the pollsters predicted. Its vote share fell not just in strong Leave areas (by 10.9 per cent) but also down by 6.3 per cent in those parts of the country that voted strongly to Remain as well.

In contrast the Conservatives picked up not only target seats in parts of the country that they have never represented before but also won in metropolitan areas such as Kensington, on which they had all but given up at the start of the campaign.

Elsewhere in the country the results are no less remarkable. In Scotland the SNP is on course to take more than 50 of the country’s 59 seats. While not in a position of power in Westminster the overwhelming support for the pro-independence party will ensure that a second Scottish referendum after Brexit loses none of its potency as an issue in the next few years.

The Liberal Democrats, leaderless after the defenestration of Jo Swinson, face an existential question about their future, having failed to win the Remain voters they hoped would give them the base to rebuild as a political force.

When the dust has settled what are the implications for Britain’s political system? What does the result mean for Labour, the new victorious Conservative government and for Brexit?

Labour will enter the new House of Commons a denuded electoral force. Jeremy Corbyn is set to go as leader and there will be a battle for the soul of the party between younger Corbynistas hoping to pick up the flame and those who wish to move the party back to the centre.

The former will squarely blame Labour’s mixed messaging on Brexit and the latter will seek to pin the fault at the door of unrealistic pledges that were seen through by its own voters.

The danger for the party is that it fights a leadership election based around Brexit. Given the size of the Conservative majority another general election is not likely to come around until 2024. By then Britain’s relationship with the European Union will look very different.

Labour will also have to judge whether its traditional electoral coalition between older working-class voters in the north and Midlands and affluent younger voters in cities is viable. Do they fight the Tories to win back what they’ve lost and tailor their policies accordingly, or do they look to create a new electoral coalition with a less defined base?

It won’t be easy. But the election result also brings challenges for Boris Johnson and the Conservatives. Although he returns to Westminster with a healthy majority he does so on the back of voters who only supported him reluctantly.

Poll after poll showed there was no real enthusiasm for Mr Johnson and the Tories among their new voters. Rather they lent him their vote to resolve Brexit and because they really didn’t like the alternative.

Mr Johnson’s crop of new MPs will also look very different. Although he has pledged to govern as a One Nation Conservative those new MPs will realise that if they want another term the ideological make-up of the party will have to change with its voters.

Once Brexit is done there will be huge pressure on the prime minister to look after these new voters. The problem is that they have different interests from the traditional Tory power base. That will be critical in decisions on whether to cut taxes or increase investment in parts of the country the Tories have tended to ignore.

Finally, the result could have profound and unexpected implications for Brexit. Mr Johnson will have a free hand to negotiate a future relationship with the EU without the huge pressure from MPs faced by his predecessor.

While hardcore Brexiteers believe that the prime minister will opt for a clean break and a minimal free trade agreement, as he has previously promised, he is no longer under pressure to follow through. Such a strategy would be economically disruptive, in the short term at least, and would probably hurt the Tories’ new voters the most.

Instead Mr Johnson may pursue a softer Brexit that is more closely aligned with Europe in the short to medium term.

One thing is clear, however. After nearly a decade of Westminster politics where no party has had a comfortable majority we are now entering a different era. The result will not heal the divisions caused by Brexit but voters have set the country on a clear new path with the political mandate to navigate it.