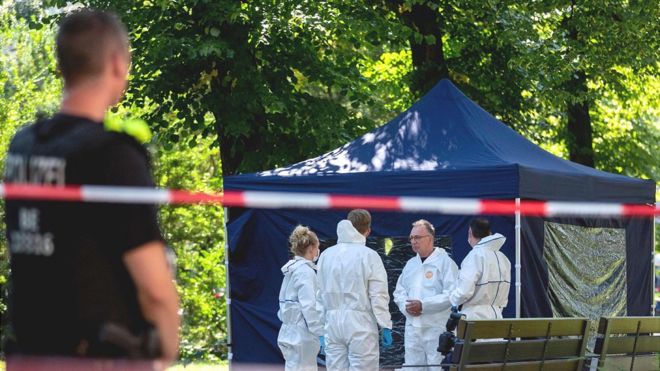 The killing of a Chechen exile in the heart of Berlin will be investigated by the chief German prosecutor as a possible Russian intelligence operation, reported BBC.

Zelimkhan Khangoshvili, 40, was shot in the head from behind in the Kleiner Tiergarten park in August.
A man was quickly arrested but now federal prosecutors say they plan to take over the case.
That step suggests a foreign intelligence service is suspected.

The case is currently being investigated by Berlin prosecutors and criminal police. According to Der Spiegel website, the suspect entered the European Union carrying papers in the name of Vadim Sokolov, 49. But that was not his real identity, it reports, and it says federal prosecutor Peter Frank suspects Russian state bodies were behind the murder.

Russia has not responded to the reports, although a spokesman did say in August that the killing had nothing to do with Russia or its authorities.

Reports at the time said Mr Sokolov was detained after he was spotted by two teenagers dumping a bike, pistol and a wig into the nearby River Spree. Investigative website Bellingcat says Mr Sokolov does not exist and was given a tax ID number days before he applied for a Schengen visa to travel to the EU. This could not have happened without direct involvement of the Russian state, it alleges.

According to Bellingcat, the real identity of the man in custody is Vadim Krasikov, born in August 1965 in Soviet Kazakhstan, and not in 1970. It describes Krasikov as a suspect in the 2013 murder of a Russian businessman in Moscow. The victim in that attack was also approached by a man on a bicycle who shot him in the back of the head.

An Interpol warrant was issued by Moscow but withdrawn in 2015, it says. Reports at the time of the Berlin murder in August said the suspect had travelled from Moscow via Paris before the attack and had a return ticket to Moscow.
German media have compared the attack on Khangoshvili to the attempted murder of Russian former intelligence agent Sergei Skripal and his daughter in the UK last year.

A Georgian national, Khangoshvili had fought in the second Chechen war against Russian forces in the North Caucasus in 2001-2005.

He had been a close ally of Chechen President Aslan Maskhadov, who masterminded Chechen guerrilla resistance to Russia and was killed in a Russian special forces raid. Khangoshvili fled to Germany after surviving an assassination attempt in the Georgian capital Tbilisi in 2015. He applied for asylum in Germany but was not granted it. Chechnya is now run by Ramzan Kadyrov, a former rebel who switched sides and is now fiercely loyal to Russian President Vladimir Putin.