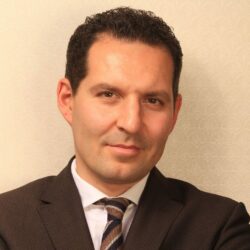 Since 2005, Mr. Tyutrin has been a member of Garry Kasparov’s United Civil Front, where he has occupied various leadership positions. Was the organizer of numerous protests in the Siberian region of Russia from 2005 to 2010.

In May 2008 was elected to the National Assembly of Russian Federation and its Council. Since 2008 till 2013 – member of the Federal political council of ODD «Solidarity» – a Russian liberal democratic political movement.

In 2011-2012 participated in organization of mass protest moves of the Russian opposition. Due to his longtime public opposition to Pres. Putin, was forced to flee Russia in 2012.

In March 2016, together with Garry Kasparov, he established the Forum of Free Russia in Vilnius, Lithuania, the largest opposition platform outside of Russia with representatives from over 70 regions of the country.

In 2022, he joined the Russian Action Committee, a movement of representatives of Russian society who oppose the war unleashed by Putin, who oppose the dictatorship in Russia and who support the unity of anti-war and pro-democracy Russians.