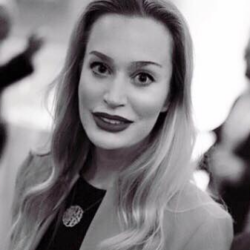 Christina Pushaw — American political consultant, founder of the NGO “New Leaders Initiative” (Tbilisi), the mentor of the Political Fundraising Program of the PR-FRF

During her undergraduate studies, Christina developed an interest in international relations. In 2011, she studied abroad in Moscow, Russia, and began studying the Russian language. This sparked an interest in Eastern Europe that has guided her academic and professional career.

Since completing her education at Johns Hopkins SAIS, a top U.S. international relations program, Christina has worked as a political consultant with specialties in media and communications for Georgian and Ukrainian politicians and businesses. Through her work, Christina has gained extensive international experience and developed strong cross-cultural communication skills as well as a nuanced understanding of local and international politics.

In August 2019, Christina launched a nonpartisan, nonprofit summer school for emerging leaders in Tbilisi and now serves as the director of the Georgian NGO “New Leaders Initiative”.