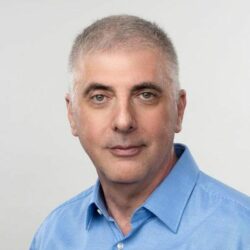 He was born in Moscow in 1959. Graduated from Gubkin Moscow Institute of Petrochemical and Gas Industry (1981) and Plekhanov Moscow Institute of Economics (1991). In 1990s and 2000s was stockholder and hold a range of leading positions in Bank Menotep, financial and industrial group ROSPROM and oil company YUKOS. In2001-2003 – representative of Mordovia in Council of Federation of RF. In 2001 – President of the Russian Jewish Congress. In 2003 was elected as rector of RSUH.

In summer of 2003 due to beginning of YUKOS case moved to Israel. In January 2004 was wanted on an international arrest warrant by the General Procuracy of Russia, further was prosecuted and was found guilty of committing a range of enormous offenses in contumaciam: organization of murders and attempts, fraud and tax defaults. In Russia sentenced to prison for life in contumaciam.

Leonid Nevzlin Center for learning Russian and East-European Jewry at Hebrew University of Jerusalem, founded by him, successfully functions since 2003. Together with former YUKOS colleagues Mikhail Brudno and Vladimir Dubovoi in 2005 he founded and today is main sponsor of NADAV Foundation – charity foundation for support of Jewish self-identification and communications between Jewish communities in the world. He is founder and member of the guardian council of Jewish People Museum, board member of the first Israeli private university Interdisciplinary Center in Hertzliya. In different years was in guardian council of charity organization Keren Hayesod as well as guardian council of the Jewish Agency Sokhnut.

Since 2011 – stockholder and board member of publishing house of the leading Israeli newspaper Haarets. Since 2014 publishes prestigious monthly analytical magazine Liberal. In2017 founded Russian-language analytical and news Israeli site “Details”.

Actively supports Russian democratic opposition, for many years he participated in work of Open Russian and Free Russia Forum. Since 2018 – board member of Foundation for Human Rights (USA).

Since 2018 – member of the Permanent Committee of the Free Russia Forum, heads working FRF party for media relations.