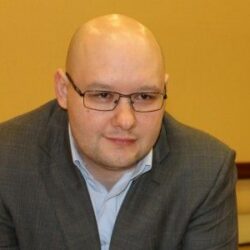 He was born Leningrad in family of further known politician Ilia Konstantinov. In 1992 family moved to Moscow. In 2001 finished school with in-depth study of English No. 1415. In 2006 graduated from legal department of the Russian State Social University. Entered RSSU graduate course. Since 2006 till 2009 studied in RSSU graduate course at specialty “Constitutional and Municipal Right”, taught legal disciplined to student of legal department.

During student years he started public activity. In 2004 headed initiative group of inhabitants of Ostankino district, striving against infill construction. In 2005 together with fellows and friends organized organizing committee for establishment of public and political party “Smena”. In the same 2005 participated in election into the National Duma as self-nominee. In summer 2007 joined movement “Narod” (Aleksey Navalniy, Petr Miloserdov, Sergey Gulyaev et al). Since November 2007 till 2008 was in party “Fair Russia”. Was one of heads of youth department of the party “Fair Russia” and head of youth branch of party “Fair Russia” in North-East Administrative District.

After participation in meeting on 5th December 2011 on Chistye Prudy “For fair elections” and participation in unauthorized move after meeting, he was arrested by the policy and taken to police division. On the night of 5th to 6th December 2011 enrollment attempt was made by unknown secret agent in police division. After refusal of enrollment threat of criminal proceedings under fabricated case was announced.

On 22nd March 2012 he was arrested because of fabricated case, initiated by officers of the Federal Anti-Extremism Center of MIA and FSS of Russia. He stated about full alibi, however spent 2 years and 7 months in detention facility. He was recognized as political prisoner by leading Russian and International Organizations: human rights center “Memorial”, Union of Solidarity with Political Prisoners, Freedom House. During his imprisoning he was elected into Coordination Council of the Russian Opposition. After release from detention center under pressure of the Russian authorities was forced to leave territory of the Russian Federation. Currently he lives in the Lithuanian Republic, where he received asylum.

Also he is one of coordinators of Charity Foundation for help for prisoners and their families “Rus serving”. He creates content for Prison consultant of “Rus serving” – joint project of “Rus serving” and Human Rights Incubator, telling about life under conditions of prison confinement in Russia.

He established and headed “Russian European Movement” in Lithuania- non-profit organization, uniting refugees and political emigrants from Russia, which conducted several significant political moves in Vilnius: Photo exhibition about violations of human rights and freedoms in Russia, “Peach March”, “Burial of the Russian Constitution”, “Alternative elections of the President of Russia”, Move in support of Oleg Sentsov and other Ukrainian political prisoners, etc.