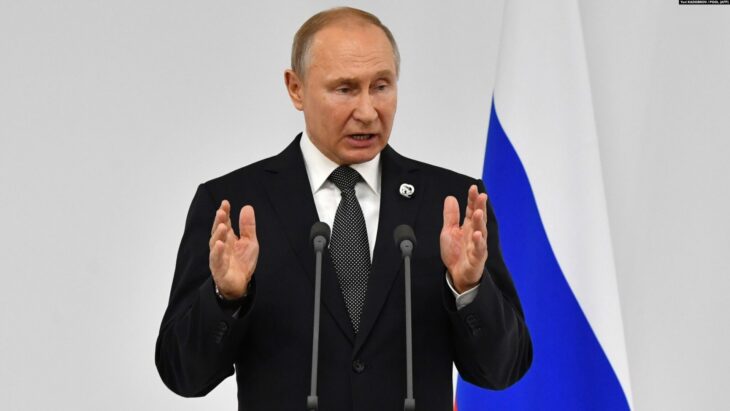 President Vladimir Putin has said that Russia seeks to “end the war” in Ukraine and does not refuse to negotiate with Kyiv, but U.S. officials say the opposite is true and Putin has shown no inclination to hold talks.

Putin, speaking to reporters on December 22, a day after Ukrainian President Volodymyr Zelenskiy visited Washington and spoke before a joint session of Congress, said he was seeking a speedy resolution to the war.

But White House National Security Council spokesman John Kirby told reporters that Putin’s actions had been “quite the contrary.” Kirby said Putin had “shown absolutely zero indication that he’s willing to negotiate” an end to the war.

U.S. President Joe Biden is open to talks with Putin, Kirby said, but only after Putin “showed a seriousness about negotiations” and after consultations with Ukraine and U.S. allies.

U.S. Secretary of State Antony Blinken also said Russia had shown no real interest in in meaningful diplomacy to bring the war to an end.

Blinken told a news conference that Russia could immediately end the war by withdrawing troops, but “in the absence of that, we have to see some meaningful evidence that Russia is prepared to actually negotiate a just and durable peace.”

Blinken said he spoke virtually on December 22 with foreign ministers of the G7 industrialized democracies about ideas for peace proposed by Zelenskiy during his visit to Washington.

Zelenskiy’s ideas are “a good start,” Blinken said, and peace would have to be “just and durable.” He reiterated that United States would not impose its own solutions on Ukraine.

Based on all conversations with Ukraine, including the ones on December 21, “it is clear that we have the same goals: a free and independent, prosperous, democratic Ukraine that demonstrates that the principles of the UN Charter are respected, including territorial integrity, sovereignty, and independence,” Blinken added.

Putin said earlier on December 22 that he hoped the conflict ends “and the sooner, the better.”

“Our goal is not to spin the flywheel of military conflict, but, on the contrary, to end this war,” Putin said.

He said Ukraine had “forbade itself to negotiate.”

“Nevertheless, sooner or later, of course, any parties that are in a state of conflict sit down and make an agreement. The sooner this realization comes to those who oppose us, the better. We have never given up on this,” Putin said.

Russia has said before it was open to negotiations, but Ukraine and its allies suspect the statements are a ploy to buy time to regroup on the battlefield.

Kyiv has said Russia must halt its attacks and give up all territory it has seized before negotiations can begin. The Kremlin has never expressed any intention to withdraw troops from the partially occupied Ukrainian territories annexed by Russia in the fall after pseudo-referendums organized by Moscow.

Putin also responded to the announcement that the latest round of U.S. military aid for Ukraine includes a Patriot surface-to-air guided-missile battery.

He said the Patriot system was “quite old” and did not work like Russia’s S-300 system.

Ukraine asked Washington to supply the systems, saying it needs them to defend critical infrastructure, such as power stations, which Russian bombardments have been hammering.

The Patriot system was first deployed in the 1980s and can target aircraft, cruise missiles, and shorter-range ballistic missiles.

Defense experts say it is one of the most reliable and proven air-missile-defense systems and could help defend Ukraine against Iranian-supplied ballistic missiles.

Putin said Russia will “crack” the Patriots systems once they are deployed.

With reporting by AFP and Reuters