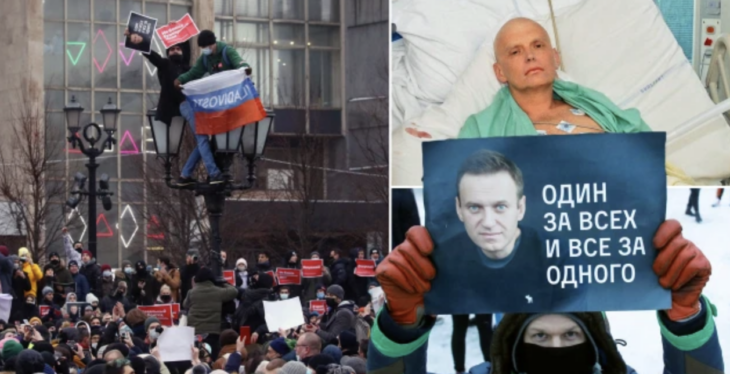 The widow of Alexander Litvinenko is calling for detained Russian activist Alexei Navalny to receive the Nobel Peace Prize for his ‘extremely brave’ fight for change. Marina Litvinenko said the move would also honour her murdered husband’s memory, saying one courageous individual is capable of uniting people against repression. She drew parallels between the targeting of Mr Navalny and other Russian dissidents and opposition figures with the murder of her husband in London 15 years ago. The opposition leader was arrested after returning to Russia from Germany on January 17, and like Mr Litvinenko had been poisoned, allegedly by the FSB security service.

Mr Navalny had been receiving life-saving treatment in Berlin, the latest in a succession of Kremlin critics and exiles targeted on foreign soil.

The 44-year-old’s detention has hit a nerve in his homeland, with his supporters taking to the streets and 3,500 protesters reportedly taken into custody last weekend. Mrs Litvinenko told Metro.co.uk: ‘Mr Navalny is an example to leaders around the world about how to be honest and brave. ‘His story is close to my own and I appreciate his decision to go back to Russia, even though it is very dangerous and he faces being imprisoned for a long time. ‘But I believe that it might only take one person to unite people behind the opposition and bring change in Russia.’ Mr Litvinenko died in November 2006, with a public inquiry concluding that the hit – using the radioactive isotope polonium-210 – was probably carried out on the orders of President Vladimir Putin. His wife said she was also speaking out for other victims of attacks blamed on the Russian security apparatus, including Sergei Skripal and his daughter, Yulia, who were poisoned in Salisbury in 2018. She also cited Russian interference in Georgia and Ukraine as further examples of how her homeland’s international reputation has been tarnished since her husband’s death.

‘There’s a saying that politics is a dirty job, but it doesn’t have to be like that,’ Mrs Litvinenko said. ‘Alexei Navalny shows you can be honest. He is saying he is a politician and he can’t do anything for the Russian people as an exile in Germany or the UK. ‘He said he would go back and has been true to his word. He is extremely brave. ‘The regime in Russia is showing how they are afraid of him, they are in a panic. Leaders all around the world have to support Navalny and what he is trying to do.’ Mrs Litvinenko, 58, who lives in the UK, believes that Mr Navalny is trying to affect the change her husband, a former KGB officer, wanted to achieve. She said: ‘My husband had to leave Russia, he wasn’t a politician and he wasn’t as well known as Alexei Navalny. ‘But I’m so glad people still remember Alexander in Russia and abroad. ‘My husband always said Putin is a dangerous man and now people are seeing more and more how he was right. Now it’s like his destiny is finally being achieved and people are ready to accept the truth.’

Mrs Litvinenko has launched an online petition at Change.org calling for the 2021 Nobel Peace Prize – which is awarded by a committee elected by the Norwegian Parliament – to be awarded to Mr Navalny. The appeal cites his work fighting corruption in his homeland and draws parallels with Russian nuclear physicist Andrei Sakharov, who received the honour half a century ago. ‘I’m telling the world to be brave and to support Alexei Navalny,’ Mrs Litvinenko said. ‘The more people who support him, the better it will be for the world. ‘My husband, Sasha, did not want the people who destroyed his own country, Russia, to destroy other countries, and make corruption normal. ‘It is absolutely right to give Alexei Navalny the Nobel Peace Prize, because with this regime in Russia we can’t live in peace. ‘If this gets the attention of people in Russia and the rest of the world we can definitely get change in Russia.’ Mr Nalvany, who narrowly survived being poisoned with the Novichok nerve agent in Russia last August, is being held in a Moscow prison on charges including accusations of fraud. After his arrest his team released a video claiming that Putin owns a £1billion palace on the coast of the Black Sea where a toilet brush is said to cost the same as a year’s pension. The Kremlin has accused the west of trying to exploit his arrest to destabilise the country and described the resort claims as ‘pure lies’. Russia has repeatedly denied being involved in the poisonings of Mr Navalny, Mr Litvinenko and the Skripals. View the petition here