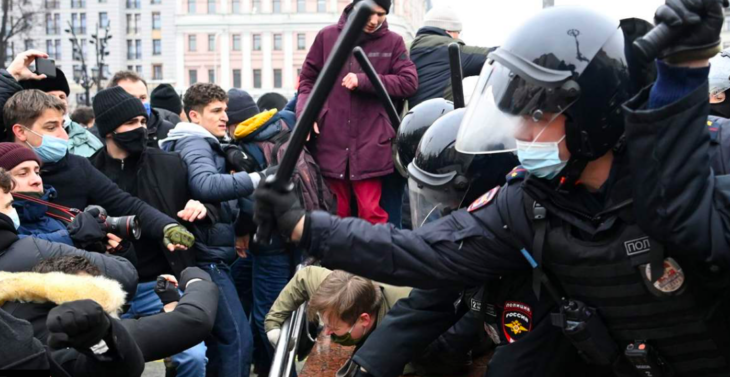 Responding to the mass arrests and detention of more than 1.300 protesters gathered today in Moscow and across Russia to rally against the politically motivated detention of prominent opposition activist Aleksei Navalny, Natalia Zviagina, Amnesty International’s Russia Director said: &nbsp

“Russian authorities relentlessly unleash reprisals against peaceful protesters what we saw today has only confirmed this. The police ignored their duty to guarantee the right to peaceful assembly and instead indiscriminately beat and arbitrarily arrested protesters, many of whom were young people.&nbsp

Amnesty International monitors witnessed first-hand the viciousness of the police response in Moscow. Low enforcement officers acted roughly and unreasonably against overwhelmingly peaceful protesters, pushing people down the stairs and beating protesters with batons. At one occasion, a policeman hit a man on the head with a baton simply for asking “What are you doing?”&nbsp

“This display of unbridled power sought to dampen the wave of discontent prompted by the arbitrary detention of Aleksei Navalny and the publication of his latest investigation, which revealed the gargantuan scale of corruption at the top of government.&nbsp

“We demand the immediate and unconditional release of all peaceful protesters and other civil society activists who have been subjected to “preventative” arrests on spurious charges, including staff members of Navalny’s Anti-Corruption Foundation. All are prisoners of conscience, detained solely for peacefully exercising their rights to freedom of expression and peaceful assembly. &nbsp

According to the OVD-Info human rights watchdog, the police detained at least 395 people in Moscow alone by the time of publication. At least 182 were detained in Saint Petersburg, 91 in Novosibirsk and 47 in Krasnoyarsk. The overall number of detainees exceeded 1.330 by 5 p.m. Moscow time.&nbsp

Ahead of the rallies, on 21 January, the police detained Aleksei Navalny’s press secretary Kira Yarmysh, Anti-Corruption Foundation staff members Georgy Alburov and Lyubov Sobol, and the Foundation’s lawyer Vladlen Los, as well as numerous others associated with the Foundation across the country. Vladlen Los, who is a Belarusian citizen, was given a deportation order to leave Russia by 25 January. The protests were called in response to the arbitrary arrest of Navalny on 17 January upon arrival in Moscow from Berlin and his subsequent detention for 30 days. &nbsp

On 19 January, Navalny’s Anti-Corruption Foundation team published an investigation into a billion-dollar palace, allegedly built for President Vladimir Putin on the Black Sea coast. Since its release, the video has been viewed by over 55 million people.