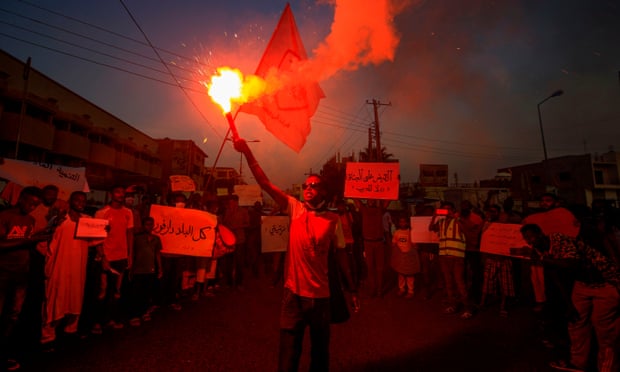 Leaked documents show links between an academic serving on a United Nations expert panel on Sudan, and Yevgeny Prigozhin, the Russian oligarch under US sanctions who has led Russia’s recent push into Africa.

According to the US, Prigozhin runs the Wagner group, which has sent mercenaries to countries including Sudan, Libya and the Central African Republic (CAR), and is also behind a notorious internet troll factory that supported Donald Trump.

In September 2019 the US Treasury department imposed sanctions on Prigozhin, as well as a number of individuals and entities closely connected to him. It says they are part of an “international network of supporters” who spread “malign influence” around the globe. In July and September of this year it targeted two Prigozhin African mining firms, M-Invest and Lobaye Invest.

Leaked records show that in 2017 M-Invest paid for a trip taken by Nikolai Dobronravin, a Russian professor and Africa specialist based at St Petersburg State University, to Bangui, CAR’s capital.

In May 2018 the UN secretary general, António Guterres, approved Dobronravin as Russia’s representative on a four-person UN expert panel on Sudan. The US initially held up Dobronravin’s appointment as part of what has been described as a “quiet proxy war” between Moscow and Washington.

Dobronravin travelled to Bangui in 2017 with three Prigozhin employees, including the founder of Lobaye Invest, Dmitry Sytii. Sytii worked for the Internet Research Agency, Prigozhin’s alleged St Petersburg troll factory, according to a US indictment in September. It imposed sanctions on Sytii and his two colleagues. Lobaye is part of a Kremlin-backed operation to exploit African resources, the US claims. Dobronravin has not been sanctioned.

The documents were seen by the Dossier Center, an investigative unit based in London. The centre, which is funded by the exiled Kremlin critic Mikhail Khodorkovsky, shared access to the files with the Guardian and New America, a Washington-based thinktank.

Russia has been lobbying to drop UN sanctions from a range of countries, including Sudan – a long-term ally. Russia has been pressing for the removal of an arms embargo on the war-torn region of Darfur, arguing that the ban is unnecessary since the situation has normalised. The UK, France and Germany disagree.

The UN expert panel on which Dobronravin sits has a wide advisory mandate, part of which includes providing information and analysis on the arms embargo in Darfur, as well as travel bans and asset freezes. Sudan’s government wants the sanctions removed.

The experts are uniquely placed to influence the lifting of sanctions and the opening up of Darfur for uranium and other mining, analysts say. If this were to happen it could be of benefit to Prigozhin’s companies, as well as to the Sudanese military, Moscow’s main ally in Khartoum, and militia groups trafficking gold across the Libya border.

The UN was apparently unaware of Dobronravin’s connection with Prigozhin. It said all candidates for expert panels were subject to a “review process and reference checks”. In one leaked chat, Prigozhin’s chief of operations in Sudan, Mikhail Potepkin, describes Dobronravin as “our professor at the UN”.\

Dobronravin acknowledged he did a “short consultancy” in CAR, but said the invite was “personal” and he only found out about the M-Invest connection subsequently. He denied this affected his current UN role, and said the firm had not been under sanctions at the time. “I didn’t work for Prigozhin personally. I don’t see this as an impediment to my UN work,” he said.

A few months after the 2017 trip, Russia’s foreign ministry tried to insert Dobronravin on a UN expert panel responsible for CAR. This was unsuccessful. A high-ranking Russian diplomat then coached Dobronravin and helped him with an application for the Sudan UN job.

Dobronravin said his travelling companions on the 2017 Bangui trip “did not introduce themselves in detail”, or reveal their surnames. The leaked files suggest he kept in touch with Sytii afterwards, as well as with other Prigozhin-linked individuals in St Petersburg.

Over the last few years Prigozhin has sent teams of advisers to several African states. In 2018 Russian political technologists drew up a programme of political and economic reform designed to prop up Sudan’s then dictatorOmar al-Bashir in the face of anti-government protests.

In April 2019 the Sudanese military deposed Bashir in a coup. The oil-rich country is now run by a transitional civilian-army government. Moscow is keen to preserve its influence. On 11 November it agreed a deal with the new government to build a naval base for visiting Russian warships.

Dobronravin said he had never written anything for the UN that favoured Prigozhin. “Any bias would be immediately seen by the panel,” he said, adding that he and his fellow experts produced yearly reports plus confidential documents. He said he was in favour of “contextualising and modernising” the Darfur sanctions regime. “I’m proud of my work for the UN. It was done with all possible accuracy,” he said.

Putin denies Prigozhin is linked to the Russian government. During a 2018 summit with Trump in Helsinki, Putin likened Prigozhin to George Soros, the American philanthropist. Documents suggest Prigozhin’s shadow activities are in fact closely coordinated with Russian officials.

“Russia … doesn’t want a democratic Sudan,” Jean-Baptiste Gallopin, a researcher on Sudan, said. “Moscow has been very active in extending its presence in Sudan in gold mining and defence cooperation. It’s about power projection.”

Dobronravin said he had received help with his UN application from Moscow’s foreign ministry, adding that without it he would never have got the post. “I would never hide anything,” he said. He said he had not met Prigozhin “officially” but declined to say whether there had been “informal contact”.

Prigozhin did not respond to requests for comment. “If they want to see the devil, let them see him,” he said in 2018, after the US accused him of waging “informational warfare”. He has denied involvement in the troll factory and has said the Wagner group doesn’t exist.