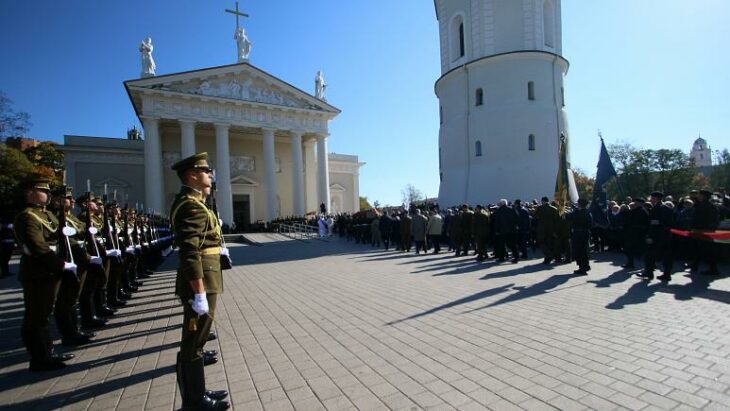 When Rimvydas Valatka signed up to a new cable TV package recently he was surprised to see — alongside the usual news, sports and sitcoms — at least six stations that broadcast in Russian.

Around the same time, Valatka, an analyst and a signatory of the act that secured Lithuania’s independence in 1991, made another observation.

Russia Today (RT), Moscow’s now-ubiquitous television network, has a budget of around $275 million (€234m) a year, a little under a third of Lithuania’s entire defence budget for 2019.

That amounts to a lot of muscle for the Kremlin in Lithuania, a country that was under Soviet rule until 1991. Lithuania’s government officially banned RT in September 2020, but it’s not been effective, Valatka said.

“Although [RT] has been banned by Lithuania for the dissemination of propaganda and enmity, it is still omnipresent on the cable TV channels and on the internet,” he told Euronews.

According to Lithuania’s State Security Department (VSD), RT is just one of a number of soft power weapons that Moscow uses to get its narrative across in the Baltic state. More broadly, the media is a prime vessel for promoting Russia’s language, culture and history in Lithuania.

Since Lithuania gained its independence from the Soviet Union in 1991, the Baltic state has embraced Europe, joining the European Union and the NATO alliance in 2004. In 2015, it joined the euro currency, the last of the Baltic states to do so after Estonia, in 2011 and Latvia, in 2014.

But despite the country’s fractious history with Russia, which forcibly absorbed it in the wake of World War II, there are forces within Lithuania who want to see it foster its ties with Moscow, often at the expense of its relationship with the European Union.

There remain at least two Russia-friendly parties in Lithuania, the Electoral Action of Poles (LRA) – made up from Lithuanians who are ethnic Poles – and the Russian Alliance. There are also individual MPs in the Lithuanian parliament who are Russian-friendly.

This division has been exposed most recently over events in Belarus, with which Lithuania shares a border.

Lithuania was the first European state to condemn the elections that saw Russia-backed President Alexander Lukashenko re-elected on August 9 in the face of vote-rigging and violence against opposition figures.

While largely well-received in Lithuania, the stance of Vilnius to Belarus angered the LRA’s Zbigniew Jedziński, who said that the Belarussian security forces that cracked down on protesters on the streets of Minsk and other cities were “defending [the country’s] constitution.”

Valdemar Tomashevski, LRA chairman and MEP, has also criticised Lithuania’s leaders for its support of the Belarussian opposition. “Belarus has chosen revolution, not evolution,” Tomashevski said.

This pro-Belarus — and, through it, pro-Russian — line has found itself amplified through the Russian dominated media, said Arvydas Anusauskas, a Lithuanian parliamentarian and a member of the Lithuanian Parliament Committee of Security and National Defence (NSGK).

He also blames a motley crew of pro-Russian organisation operating in Lithuania under the umbrella of the Russian Embassy in Lithuania.

“All of them dutifully support the historic narrative being foisted by the Kremlin: that it is Russia that has liberated everybody, and the views reflecting all the major events in the world — be it the clampdown on the Belarusian opposition, the war in Ukraine or any event in any country worldwide — come under the Russian influence,” Anusauskas said.

He added that pro-Russian sentiment — at least in Lithuanian politics — has tapered off since the war in Ukraine, which saw Moscow annex the Ukrainian territory of Crimea.

“In its wake, many Lithuanian municipalities that had cherished their ties with Russian administrative units severed them and/or reassessed them,” Anusauskas said.

It is little surprise, then, that since 2014 Russian influence in Lithuania has taken the form of so-called “soft power” rather than an attempt to actively interfere in politics in the country. As well as the growth of Russian-language media, the battle for influence between east and west has recently manifested itself in basketball in a spat over whether Baltic teams should take part in Russia’s professional basketball league, the VTB.

One of the 13 teams taking part in the 2020-21 season is Kalev, from Estonia, and Lithuania’s main club, Zalgiris, also recently mulled joining the Russian league.

“Had the club accepted the offer it would have become, perhaps unbeknownst to it itself, part of the Russia propaganda machine,” pondered Valatka.

Russia also remains one of Lithuania’s key export partners, according to data from Statistics Lithuania, released in September. In the first half of 2020, Russia was responsible for 13.6% of Lithuania’s exports — the largest of any other country — and 9.6% of imports.

Given such links, Russian soft power in a smaller nation like Lithuania is perhaps to be expected, said Gediminas Grina, former director of Lithuania’s State Security Department.

“Both politics and culture, as well as sports, media and leisure activities serve the purpose and are enmeshed endlessly. Speaking of Russia, it is hardly an exception in terms of influencing smaller neighbours at the borders. However, some countries are hostile and some are not.”

As Lithuania is a democratic country, he said, it is hard to root out manifestations of soft power.

“Look, with any constraint being enforced, we will start hearing it constitutes a breach of human rights. This is how the democratic world is. And, frankly, walking the line is a very delicate matter,” Grina said.

“At the end of the day everything boils down to the consciousness of the individual – how he or she perceives things and, yes, threats to our national security,” he added.

The case of Baltic teams joining Russia’s basketball league is a classic example: Doing so may be a soft power win for Moscow, but at the same time it is a huge financial boon to the clubs.

“In pure terms of sports, our clubs can benefit,” he said.

For Valatka, combatting soft power of any form in Lithuania is a long term project, and the only way to win it is through a long-term strategy. He has seen plenty of examples of prominent scientists, teachers, law enforcement figures and others taking the Moscow line on social media, often without realising what they are doing.

“The only weaponry we have in the fight is intellectual – raising free, conscientious, critically-minded and financially-free citizens.”