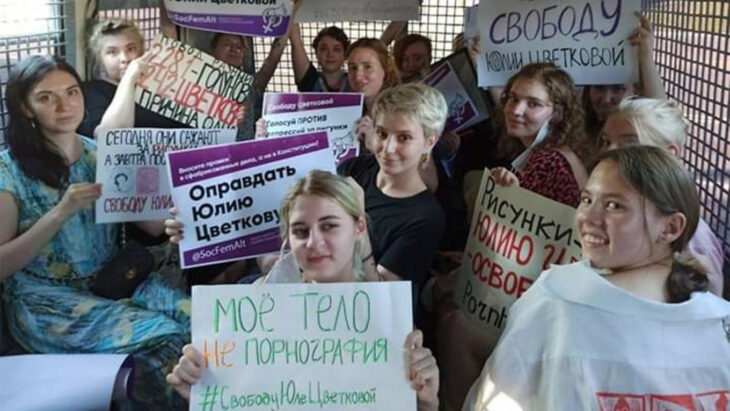 For weeks, Russian women have been posting non-sexualized photos of themselves in little or no clothing as well as artwork of tummy rolls, body hair, vaginas and breasts on social media.

The online flashmob, a common form of protest in Russia, is taking place in support of Yulia Tsvetkova, a feminist and LGBT activist from the city of Komsomolsk-on-Amur in Russia’s Far East.

It’s just one of the efforts in recent weeks aimed at drawing public attention to Tsvetkova’s case — and potentially turning the tide in her favor.

The 27-year-old artist is facing up to six years in prison on criminal pornography charges for her “Vagina Monologues” social media page, which featured abstract illustrations of female sexual organs in all shapes and sizes to help end the stigma surrounding women’s bodies.

“I see a lot of people who aren’t afraid to express their opinions, take to the streets and publicly support feminist and LGBT movements,” Tsvetkova told The Moscow Times. “I see that women’s voices are being heard more and more.”

Against the backdrop of Russia’s recent adoption of constitutional amendments that enshrine conservative, populist beliefs in Russia’s basic law, Tsvetkova has become a symbol of the consequences of Russia’s push for “traditional family values” at the expense of free expression.

She has been labeled a political prisoner by domestic and foreign rights groups alike and an online petition calling for the charges against her to be dropped has gathered more than 234,000 signatures. In the months since her case started, she and her mother have experienced harassment and death threats.

She has also been hit with administrative fines and charges over drawings that promoted concepts like body-positivity and acceptance of sexual identity among young people in her community, which were found to have violated Russia’s “gay propaganda” law.

“The reason Tsvetkova is targeted so relentlessly is that she is a feminist and an LGBT activist in a remote town, where she particularly stands out as a dissenter and a free thinker,” said Anastasiia Zlobina, a representative for the Human Rights Watch NGO in Russia.

Nicole Garneau, a U.S.-based artist who helps organize efforts to support Tsvetkova, said Russia has developed a narrative of heroically protecting children from ideas of non-traditional sexual relations while trashing feminists and others who support women’s rights.

“This is a useful distraction from the very serious struggles facing average Russian people,” she added.

Ahead of Tsvetkova’s trial, which is set to begin in mid-July, activists across Russia are mobilizing, with in-person and online protests calling for her release.

“My task was to distinguish this case from the background of an overwhelmed protest agenda — we have a huge amount of injustice in Russia, so nobody noticed persecution against another LGBT activist,” said Olga Karchevskaya, an activist who has been working to raise awareness for Tsvetkova’s case for the past year.

With large gatherings like protests off-limits because of the coronavirus, activists have staged solo pickets in Moscow, St. Petersburg and other cities across the country in recent weeks.

At last Saturday’s pickets which involved over 500 people nationwide, more than 40 people were detained in Moscow and St. Petersburg, some of them by force. One of the protesters was jailedfor 20 days on charges of repeated violations of Russian protest law, while others have been ordered to pay fines.

Also on June 27, activists organized a “media strike” that saw more than 50 Russian media outlets, bloggers, celebrities, NGOs and cultural organizations go dark all day to call for the charges against Tsvetkova to be dropped immediately.

“The staunch support for Yulia inspires hope,” Zlobina said. “On the other hand, the case against her stems from vague, selectively enforced legislation.”

This week, Russia’s human rights commissioner Tatyana Moskalkova promised that she would personally look into Tsvetkova’s case — perhaps the biggest gain from the recent protests.

Still, it’s far from a guarantee that Tsvetkova will walk free at the end of her trial. If she is handed a jail sentence, the implications will be chilling for Russia’s feminist community, Karchevskaya said.

Regardless of what happens next, Tsvetkova herself said it’s been “an inspiration” to watch the protests from afar and that the increased awareness of her situation has given her “strength” ahead of her trial.

“All of this gives me hope that in this country, not everything is as bad as it seems on difficult days,” she said.