By Andrew Higgins SANDARMOKH, Russia — The day began, like many others in her childhood years, with hours of tramping through an insect-infested forest with… SANDARMOKH, Russia — The day began, like many others in her childhood years, with hours of tramping through an insect-infested forest with the family dog while her eccentric father, Yuri Dmitriev, wandered off to hunt in vain for corpses buried among the trees.

On that day more than 20 years ago, however, Mr. Dmitriev, an amateur but very determined historian, finally found the gruesome prize he had long been searching for — burial mounds containing the remains of political prisoners executed by Stalin’s secret police.

“Everything started here,” said Mr. Dmitriev’s 35-year-old daughter, Katerina Klodt, during a recent visit to the forest at Sandarmokh in Karelia, a peninsula in northern Russia. “My dad’s work has clearly made some people very uncomfortable.”

Mr. Dmitriev is now in jail, awaiting trial on what his family, friends and supporters dismiss as blatantly fabricated charges of pedophilia, an accusation that has frequently been used to discredit and silence voices the Russian authorities do not like.

An official in Karelia, Mr. Dmitriev’s home region next to Finland, complained last year that the jailed historian’s life work — the commemoration of Stalin’s victims at Sandarmokh forest — had created an “unfounded sense of guilt” and been used by “foreign powers for propaganda against Russia.”

In pursuit of a guilt-free version of Russia’s past, men in camouflage uniforms visited the same forest last summer to do their own digging, uncovering the remains of 16 corpses that they hope will prove that the killing at Sandarmokh was, at least in part, the work of foreigners, not just the Soviet secret police.

Sponsored by the Military Historical Society, a state-funded organization notorious for its nationalist take on Russian history, the diggers were looking for evidence to support a highly contested theory put forward by two Karelia historians. They argue that the thousands of people buried at Sandarmokh are not all Stalin’s victims but also include Soviet soldiers executed by the Finnish Army during World War II.

With the approaching 75th anniversary on May 9 of the Red Army’s victory over Nazi Germany and its allies like Finland, the suffering inflicted on Russia by its own rulers in the Kremlin has become an unwanted distraction from memories of the country’s immense wartime sacrifice against foreign enemies.

President Vladimir V. Putin and his officials do not deny the horrors of the Stalin era, but intent on convincing Russians that their country is besieged by external foes, want them focused instead on crimes committed by foreign aggressors. The coronavirus pandemic has derailed plans for a huge military parade through central Moscow, but state news media has already been saturated for months with daily reports about Russian suffering and heroism during what is known in Russia as the Great Patriotic War.

Mr. Dmitriev, meanwhile, has been sitting in a pretrial detention center in Petrozavodsk, the capital of Karelia. Late last month, a municipal court — sealed off to visitors because of the coronavirus — extended his detention for another three months.

A few days later, the curator of a museum near Sandarmokh, who had supported Mr. Dmitriev’s work and had also been jailed on pedophilia charges, died in a prison hospital from an unspecified illness.

Ms. Klodt said she had no doubt about her father’s innocence and blamed his travails on his stubborn insistence that all victims be remembered, not just those killed by foreigners. Sitting on a bench near a tree pinned with an American flag commemorating a man from San Francisco executed in Stalin’s Great Terror, she pointed with disgust at a snow-covered hole dug by the Military Historical Society as part of its search for Russians killed by Finland.

“I am so tired of this circus,” she said. “I don’t understand what they are trying to prove.”

Anatoli Razumov, director of the Center for Recovered Names in St. Petersburg and co-author with Mr. Dmitriev of a book listing the names of more than 6,000 people killed by Stalin’s secret police in or near Sandarmokh, described the hunt for evidence of Finnish atrocities as part of a propaganda campaign by nationalists backed by the Russian state to create “hybrid history.”

The aim, he said, is to muddy clear facts about Russia’s past by mixing them with nationalist tropes and wild conjecture designed to confuse and distort. The same tactics, he added, are being used to muddle the history of Russia’s most infamous killing ground, Katyn Forest, where Stalin’s secret police, the N.K.V.D., in 1940 executed more than 20,000 Polish military officers, clerics and intellectuals.

The Military Historical Society has been in the vanguard of an effort to rewrite this grim episode, too, reviving a discredited Soviet claim that Hitler’s army was at least partly to blame for the Katyn massacre.

Mr. Dmitriev, 64, was first arrested on pedophilia charges in December 2016, shortly after historians close to the historical society began challenging his findings at Sandarmokh.

A court in Petrozavodsk cleared him in 2018 of all charges relating to nine photographs of his adopted youngest daughter, Natalia, that prosecutors described as pornographic. The defense, backed by expert testimony, argued that the pictures, found on Mr. Dmitriev’s home computer, had been taken simply to monitor the medical condition of a girl who, at the time of her adoption, had malnutrition and severe developmental problems.

Citing unspecified “new circumstances,” Karelia’s highest court in 2018 voided the acquittal and ordered a retrial. Mikhail Anufriev, Mr. Dmitriev’s lawyer, said he had hoped for a final ruling in coming weeks but, with Russian judges mostly confined to their homes because of the coronavirus, he worries about his client getting stuck indefinitely in a crowded detention center and at serious risk of infection.

“This whole case is a horror,” said Natalia Pakentis, a former ballet dancer in Petrozavodsk who credits Mr. Dmitriev with helping find out that her long-lost grandfather had been executed at Sandarmokh in 1938. “Millions of people were killed and they all have families. How can we now pretend that none of this really happened?”

That hundreds of thousands of people were executed by Stalin’s N.K.V.D. secret police — a forerunner of the K.G.B., which Mr. Putin joined straight out of college — was hardly a secret when Mr. Dmitriev began his search for bones in the 1990s. It had been common knowledge for decades.

Yet, until he discovered the mass graves at Sandarmokh, few of the killing fields had been found. Even those that were known about — like an N.K.V.D. execution ground in the Siberian village of Kolpashevo, discovered in 1979 when a nearby river dislodged more than 1,000 mummified corpses — had often been covered up by officials or overshadowed by war memorials celebrating Soviet heroism.

At the time of his initial arrest, Mr. Dmitriev was chairman of the Karelia branch of Memorial, a group that has infuriated Russian nationalists by focusing on the suffering visited on Russians, Ukrainians and others by the secret police instead of by foreigners. The Russian authorities branded Memorial a “foreign agent” in 2012, and the group has been demonized since by the state-controlled news media as a Western-backed nest of depraved traitors.

Irina Takala, a historian at Petrozavodsk University, said the theory that Soviet soldiers were buried at Sandarmokh had no factual basis but “fits into an unfortunate trend of trying to show that Russia is always the victim, never the perpetrator.”

The main promoters of this theory are her boss, Sergei Verigin, the head of the university’s history department, and another historian at the university, Yuri Kilin. Both are members of the Military Historical Society.

In an interview in Petrozavodsk, Mr. Verigin, the co-author of a recently published book titled “The Riddles of Sandarmokh,” insisted that he was not trying to deny Stalin-era atrocities or prove that the forest did not contain the remains of innocent people murdered by the Soviet secret police.

But, he added, their number has been vastly exaggerated by “so-called democratic forces who want to politicize” history and obscure the crimes of Russia’s enemies during World War II. Mr. Kilin, in a telephone interview, accused “extreme liberals” of constantly raising the number of Stalin’s victims in an effort to “denigrate our past and darken our future.”

The idea that Soviet soldiers executed by Finnish forces are also buried at Sandarmokh, Mr. Verigin said, “is just a hypothesis” based on N.K.V.D. archives that were opened in 2016 to selected scholars by the Federal Security Service, as the security service is now called. Digging by the Military Historical Society, he added, will help prove his theory.

He declined to comment on the pedophilia charges against Mr. Dmitriev, saying that “justice should be allowed to run its course.”

The remains uncovered in last year’s search for the remains of Soviet soldiers killed by Finland have been sent to the Investigative Committee, Russia’s equivalent of the F.B.I., for forensic analysis, but the results have not been announced.

In a scholarly rebuttal of the theory put forward by Mr. Verigin and Mr. Kilin, Antti Kujala, a historian at the University of Helsinki and authority on the war, concluded that their “hypothesis,” along with the jailing of Mr. Dmitriev and the recent excavations at Sandarmokh aimed at undoing his work, suggested “an attempt to belittle and downplay Stalin’s mass murders, to rouse suspicion about the work of Memorial and also to intimidate and silence the people who have been active in the organization.”

As the court in Petrozavodsk resumed its hearing of Mr. Dmitriev’s case behind closed doors, Dmitry Tsvibel, an old friend of the jailed historian and chairman of the town’s Jewish community, invited the small group of well-wishers outside the courthouse for lunch in a nearby synagogue. There were fewer people than usual, he said, because the coronavirus had kept some of Mr. Dmitriev’s supporters, many of them elderly, at home.

“Everyone understands what is going on here,” Mr. Tsvibel said. “This whole case is absurd. It not only has a political background, but is a political hit job.” 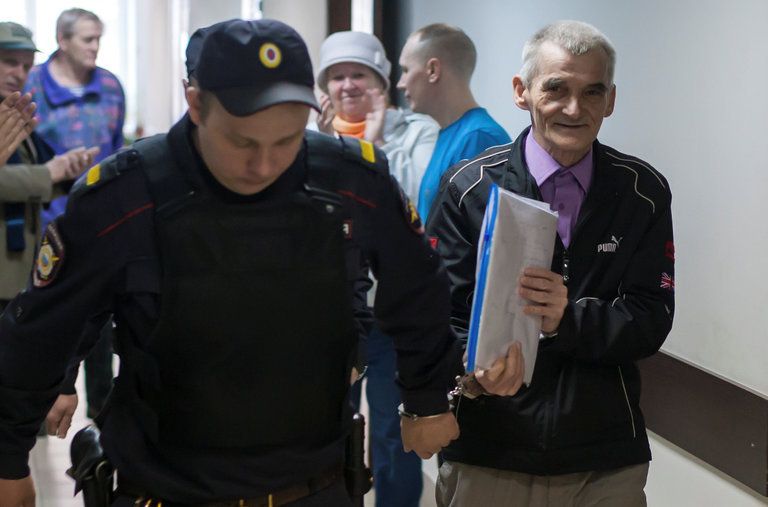 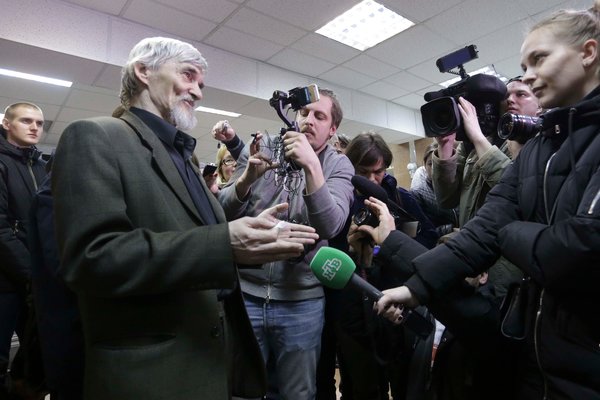 Putin Reclaims Crimea for Russia and Bitterly Denounces the West 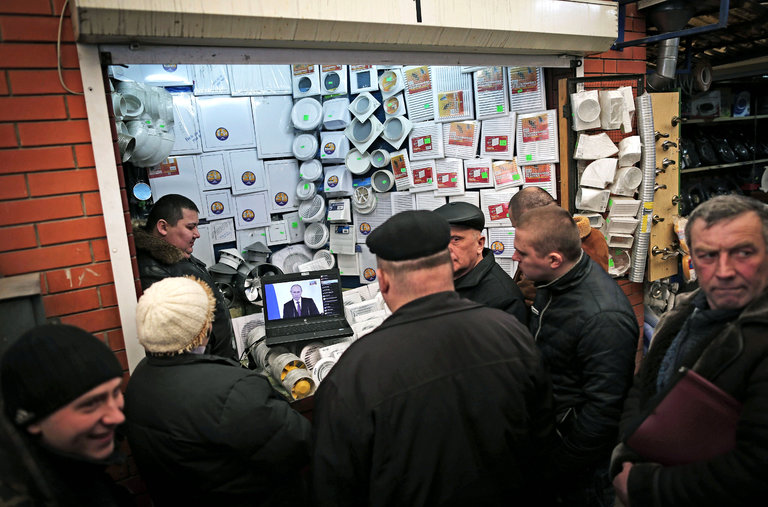 An earlier version of this article referred incorrectly to when a municipal court extended the detention of Mr. Dmitriev. It was late last month, not last week.

Andrew Higgins is the Moscow bureau chief. He was on the team awarded the 2017 Pulitzer Prize in International Reporting, and led a team that won the same prize in 1999 while he was Moscow bureau chief for The Wall Street Journal.