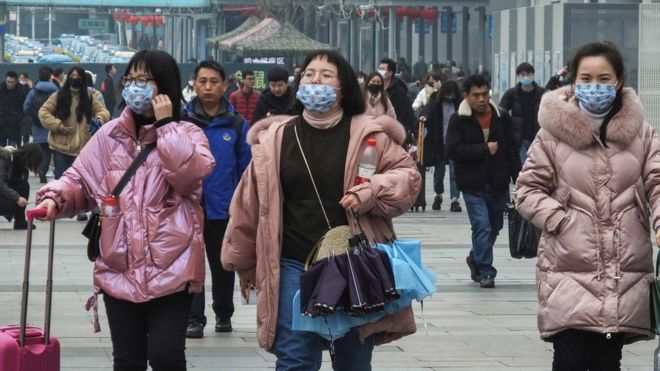 Speaking on the 10th anniversary of the 2003 SARS crisis, Zhong Nanshan, one of the heroes in China’s fight against that disease, described it as a “turning point” for the nation.

“SARS forced the whole country to pay attention to the livelihood of the people,” he said, before adding a warning. “We’ve made huge progress, but our footsteps are slow, especially in terms of healthcare.”
With the Wuhan coronavirus spreading across the country, killing at least 25 people so far, China is now facing a major test of just how much it has changed since 2003, both in terms of the healthcare system’s ability to react to a new deadly pathogen — and crucially, how the central government handles the developing crisis.
Speaking this week, Chinese President Xi Jinping ordered “all-out efforts” to contain the virus’ spread and treat those affected. His intervention seemed to carry with it a clear message: the mistakes of SARS will not be repeated.
Wuhan is only the latest crisis to face Xi since he secured personal control of the Communist Party, joining the US-China trade war, ongoing anti-government unrest in Hong Kong, and the recent Taiwan election, in which Tsai Ing-wen, much loathed by Beijing, handily won reelection against a more pro-China candidate.
More than any leader since Mao Zedong, Xi has centralized power around himself. He is the state, and while this gives him immense control, it also means that every crisis is a test of his leadership — Wuhan perhaps most of all, as the country looks to their leader for reassurance and confidence.
Since Xi’s statement, efforts to control the virus have ramped up nationwide, with health authorities ordering the highest level response, typically used to tackle outbreaks of plague or cholera. On Thursday, Wuhan itself — all 11 million people — was partially quarantined, with public transport “temporarily suspended,” including all planes and trains departing the city.
In state media, editorials urged greater transparency and lauded the central government’s quick response and that of Chinese scientists and doctors, who quickly released the virus’ genome in order to aid the work of other researchers worldwide in coming up with a vaccine.
Despite the laudatory efforts of Chinese healthcare workers, however, and forceful statements from Beijing, allegations of an initial — and potentially even ongoing — cover-up continue to hang over the Wuhan outbreak.
This virus could have been China’s chance to exorcise the ghosts of SARS once and for all, instead it may have exposed that, for all the progress in the past 17 years, fundamental flaws remain in place when it comes to handling a crisis like this — ones that could result in far greater danger in future.

The first cases of what would later be called severe acute respiratory syndrome (SARS) were identified in southern China in November 2002. The virus would go on to infect more than 8,000 people worldwide, the majority of them in China.
Even as the deadly pathogen spread throughout Guangdong province, however, media reports were censored and patients and their families prevented from speaking out. If they addressed the issue at all, officials downplayed it, unwilling to risk upsetting the economy or “social stability” — important metrics for future promotion.
It was not until whisteblower Jiang Yanyong, a retired Chinese army doctor, came forward in early 2003 that much of China and the rest of the world became aware of the true danger — by which time SARS had already spread widely. The virus was soon declared a “global threat” by the World Health Organization (WHO) and efforts to contain its spread were put in place worldwide.
In the months that followed, China’s government officially apologized for its slow reporting of the outbreak, and the country’s health minister was sacked, along with the mayor of Beijing at the time. “Never again” was the message of the day, one that has been repeated ad nauseum regarding the Wuhan virus.
While the Communist Party’s grasp on power in China has grown stronger than ever under Xi, it’s popular legitimacy is much more fragile. The SARS scandal, and similarly mishandled crises such as the 2008 Sichuan earthquake, had a devastating effect on that legitimacy, greatly alarming officials who place “stability” above all else.
Xi’s gathering of power around himself also means the Wuhan crisis will be more of a test of his personal control of the Party and country — and of the highly-centralized system he’s put in place in recent years.

By a number of measures, China’s handling of the current crisis has been infinitely better than during SARS. Authorities in Wuhan alerted the public to the new virus in mid-December, soon after the first cases were identified. Xi’s statement four weeks later drastically boosted the response and publicized the risk.
In 2003, by comparison, it was over two months after the first patients were diagnosed with SARS that the WHO was alerted — by a whistleblower, not the Chinese authorities — of a “strange contagious disease” that has “already left more than 100 people dead.”
But behind this outwardly competent handling of a crisis there are signs of a deeper problem.
One of the oldest cliches in Chinese politics is that “the mountains are high and the emperor is far away.” Despite being an intensely centralized state, provincial authorities do not always act as Beijing would prefer, nor do commandments from on high — to crack down on corruption or reign in pollution, or to increase transparency — always trickle down to the provinces.
While unconfirmed, there are numerous indications that officials in Wuhan downplayed the risks of the virus for several weeks, delaying proper action and potentially increasing its spread.
Though the first case was detected on December 8 — it was not until January 14 that officials in Wuhan introduced any screening measures. In the intervening period, a major meeting of the Hubei provincial party was held in the city, and more than 40,000 families were invited to attend a banquet in an attempt to set a world record.
Speaking to state media, Wuhan officials downplayed the danger, saying the virus was unlikely to be spread from human to human. State officials initially repeated this assessment: Wang Guangfa, head of a team of researchers sent from Beijing to investigate the situation, said on January 11 that it was under control — he has since been diagnosed with the virus.
At the same time, Wuhan authorities also tried to clamp down on discussion of the virus. State media reported that police arrested eight people in early January for spreading “rumors” that the virus was related to SARS, something which has since been confirmed by health authorities.
Even as researchers in the UK estimated that the initial spread of the virus could have affected at least 1,700 people, no new cases were reported in Wuhan itself, despite patients being identified in other countries. “Does the virus only affect overseas travelers?” people asked darkly on Chinese social media, where accusations of a cover-up quickly spread and were censored.
It was not until inspectors sent from Beijing had assessed the situation that the alarm was properly raised. In an interview with state broadcaster CCTV, Zhong Nanshan, the SARS hero, said there was “definitely human-to-human transmission,” and warned the infection rate was “climbing.”

Speaking to state media this week, Wuhan Mayor Zhou Xianwang admitted that the city’s “warnings were not sufficient.”
Whether because of bureaucratic incompetence or a politically-motivated cover-up, the delay could not have come at a worse time. China is currently in the middle of the Lunar New Year travel rush, in which hundreds of millions of people move across the country, packed close together on trains, coaches and planes.
Revelations about the true spread and severity of the virus only came after the four-week travel period had got underway, and restrictions on people leaving Wuhan itself did not come into place until Thursday. One woman identified as having the virus in South Korea even told health officials there that she visited a doctor in Wuhan with symptoms — after screening measures were introduced — but got sent on her way and was able to leave the country.
The pervasive censorship of the Chinese press and internet undoubtedly played a role in this, as did Xi’s years-long crackdown on civil society groups, forcing people to rely on official accounts and the transparency of officials whose own motivations are often completely apposite.
Once Xi intervened, essentially signaling that the Wuhan virus was fair game for Chinese media, reporters rushed to the scene. Both Caixin and the Beijing News — some of the most independently minded outlets in the country — quickly began producing in-depth coverage, some of which exposed oversights by local officials and punched holes in their narrative. Writing on WeChat from Wuhan, Caixin reporter Gao Yu compared the situation to SARS, saying that “the lack of transparency, public supervision and truth (have) caused huge damage to public safety.”
China learned hard lessons in 2003 at a terrible cost. The legacy of SARS could be seen in the central government’s response this month, and that of Chinese scientists, both of which deserve a great deal of credit.
But Xi has also reversed gradual liberalization and opening up which occurred post-SARS, massively centralizing power within the Communist Party once again. At the same time, he has overseen a crackdown on the internet, the press and civil society, and an anti-corruption purge that, while it has turfed out plenty of bad apples, may also have left provincial officials more afraid of angering Beijing.
Xi is the closest China has had to an emperor since Mao, but like the old saying goes, he’s often far away. The Wuhan virus shows what happens when the country has to rely on information filtering up to the top for decisive action to be taken.