Student activists calling themselves “the brigade” say they were just looking to have some fun in Petrozavodsk, the capital of the Karelia region in northwestern… 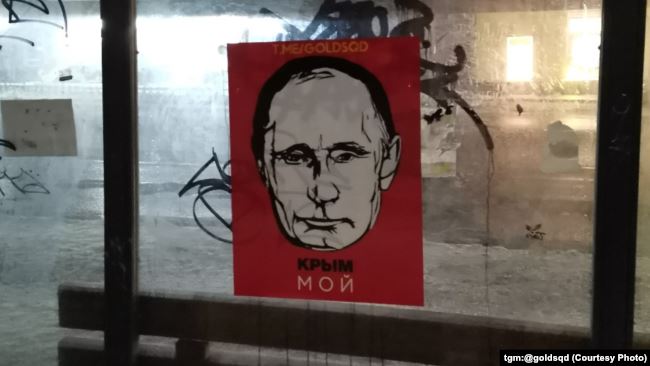 Student activists calling themselves “the brigade” say they were just looking to have some fun in Petrozavodsk, the capital of the Karelia region in northwestern Russia.

But when they plastered buildings and bus stops with posters depicting President Vladimir Putin looking a bit like Big Brother — as well as caustic phrases like “the meme is funny, the reality is horrible” — not everyone was laughing.

The regional branch of the Interior Ministry tracked the activists down surprisingly quickly, they said, given that they had done their work under the cover of dark and with faces masked. And according to the activists, all students in Petrozavodsk, police knew their mobile phone numbers and called them with chilling messages.

“Interior Ministry officials contacted us and told us, ‘You’re screwed,'” one the students, speaking on condition of anonymity for fear of reprisals from the authorities, told the North Desk of RFE/RL’s Russian Service.

Members of the group claim the Interior Ministry warned them that they could be prosecuted under Article 282 of the Russian Criminal Code, which outlaws acts or statements that incite ethnic, religious, or other forms of hatred or public discord.

The regional branch of the Interior Ministry in Karelia declined to comment on the allegation of the threat of prosecution, which comes against a backdrop of what critics say are ongoing efforts by Putin’s government to squelch dissent, curtailing freedom of expression. 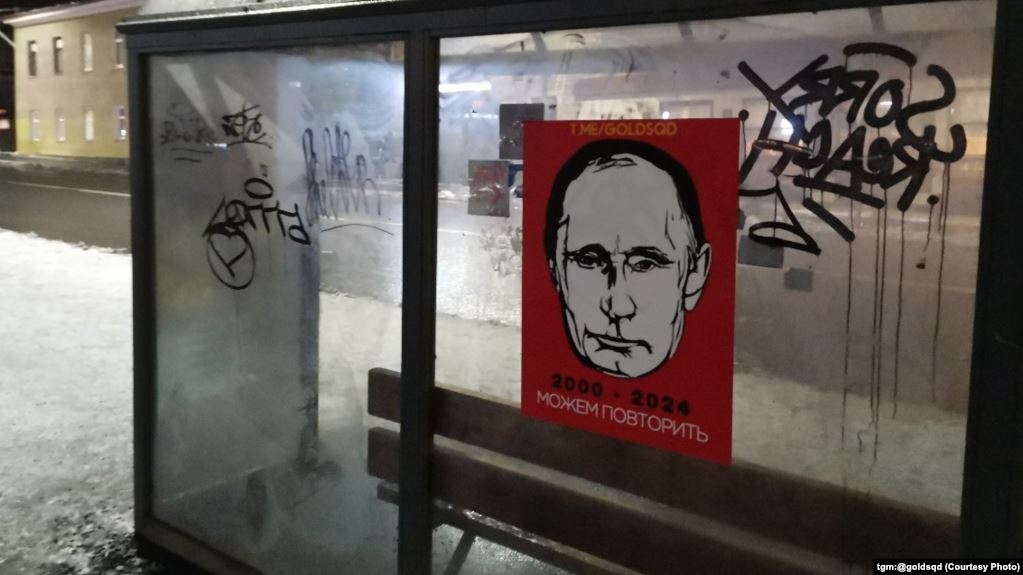 Residents of Petrozavodsk, a city of some 280,000 on the shores of Lake Onega, awoke on December 9 to the sight of posters plastered on building facades, bus shelters, and other surfaces bearing a stencil portrait of a stern-faced Putin — head only — centered on a blood-red field and seeming to stare at them.

Accompanying the images were inscriptions such as “Crimea is mine,” “Don’t do anything anyone,” “The meme is funny, reality is horrible,” and “2000-2024/We can repeat it,” a reference to Putin’s time in power and the year his current term is due to end.

There were eight different posters, and it is unclear how many in total were put up — but all were quickly ripped down by police.

The poster ploy piqued the interest of social-media users, with many signaling approval. “It’s cooler than just words,” wrote one commenter on Russian social network VK.

Group members told RFE/RL that the poster prank and a recent spray-paint campaign skewering Moscow Mayor Sergei Sobyanin, which they called “artistic vandalism,” were “more about fun than a social or political act,” as one of the students put it — at least “so far.”

“We’ll see what comes of it. Of course, it would be great to say that we hope that it will lead in some way to some kind of change in the country,” the student said. “But we’re basically realists. So, our general aim is to grab people’s attention. And we want to stir things up a bit in Petrozavodsk; our city is painfully boring.”

Though they did their work furtively under the cover of night and masked, the activists figured the authorities would eventually track them down. “There are cameras everywhere in Petrozavodsk. We know that. But if they want to find you, they’ll find out. We understood this from the start,” the group member said.

However, they didn’t think it would be so fast.

The student also said that if anything, they expected to be prosecuted on suspicion of vandalism and not the crime covered by Article 282, which is punishable by up to six years in prison if committed by a group.

“It’s really surprising how quickly things have developed. It’s scary to think about what will happen next…. We hope that things don’t get crazy and that there won’t be real prison sentences.”

The Karelia branch of the Russian Interior Ministry did not address any of the group’s claims that they may face prosecution. “What they say is purely their own business,” spokesman Aleksandr Voronchenko said in comments to RFE/RL.