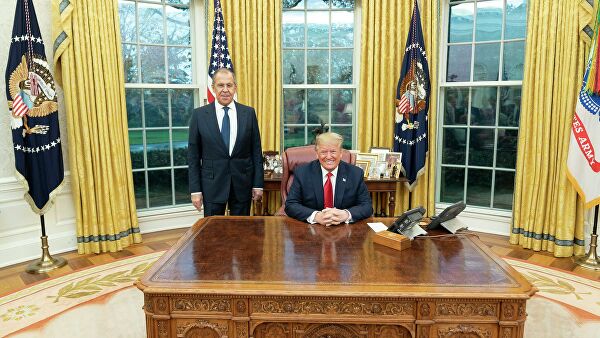 Trump also urged Russia to resolve its conflict with Ukraine, and he emphasized to Lavrov his support for global arms control that includes not only Russia, but also China, the White House said in statement.

Trump’s meeting with Russian Foreign Minister Sergei Lavrov, which focused on arms control and other issues, was their second Oval Office meeting. The first time they huddled, Trump boasted about firing his FBI director and revealed classified information.

That session came to illustrate the unusual affinity Trump has demonstrated for Russia, which has been criticized by Democrats, given Moscow’s attempts to help Trump win the 2016 election. Even amid impeachment proceedings indirectly tied to the Russia matter, Trump seems unconcerned about the appearance that he is fostering close ties to Russia and its leaders.

The House impeachment inquiry examined Trump’s efforts to leverage US military aid to Ukraine in exchange for investigations into a personal political rival and a theory that US intelligence services say was planted by Russia: that Ukraine and not Moscow interfered in the 2016 election.

Trump met with Lavrov alongside Secretary of State Mike Pompeo. The White House said afterward that they had discussed an arms control deal that includes China, the denuclearization of North Korea, Iran’s nuclear program and trade, including negotiations with China and the potential for greater trade with Russia. Lavrov told reporters that they had also discussed Afghanistan.

Afterward, Trump praised the “very good meeting.” His tweet made no mention of Russia’s war with Ukraine, but it did say he and Lavrov had discussed “election meddling.”

But at a news conference at the Russian embassy at the end of the day, the Russian diplomat wouldn’t answer directly when asked about the White House claim that Trump had warned him about Russia interfering in the 2020 elections. ​

“President Trump, oh, by the way I told him that State Secretary mentioned that publicly,” Lavrov said, referring to Pompeo. ​

When asked if impeachment had come up, Lavrov said that he had “already responded and I said which topics were covered and as I said we did not talk about anything else.” When asked whether it was a coincidence that Trump met with him on the day the House unveiled the articles of impeachment, Lavrov said, “I do not know.” ​

He added, “Honestly, I was not interested in that.”

Like the last Oval Office meeting between Trump and Lavrov, Tuesday’s encounter was closed to US press.

But it once again drew attention to the shadow that Trump’s relationship with Russia has cast over his presidency.

Lavrov complained about that at the Russian embassy news conference, saying that within hours of his meetings there were “already a lot of complaints” in the American press and that Rep. Adam Schiff, the California Democrat who is the chairman of the House Intelligence Committee, had called their meeting “a success of the Russian propaganda.”

Lavrov also said that on Putin’s instructions he had extended another invitation to Trump to attend Moscow’s Victory Day in May, a celebration of Russia’s military might.

Even as the Trump administration’s National Security Strategy has identified Russia as a core competitor that aims to weaken US influence in the world and undermine its alliances, the President has lavished praise on Russian President Vladimir Putin, insisted on the need for better relations between the two countries and resisted Congress’ efforts to levy sanctions on Moscow.

He has publicly sided with Putin over US intelligence services on the question of whether Russia interfered in the 2016 elections and repeatedly tried to undermine findings that Moscow was responsible — continuing that effort Tuesday morning, just hours before he was set to meet Lavrov.

Trump’s meeting with the Russian foreign minister came a day after a highly anticipated report by the Justice Department inspector general found that there was no evidence of Ukraine meddling in the 2016 elections. Moreover, it also thoroughly rebutted the idea that FBI officials were driven by political bias to spy on Trump campaign officials as part of the investigation into Russia’s interference.

“I don’t know what report current Director of the FBI Christopher Wray was reading, but it sure wasn’t the one given to me,” Trump complained in his tweet. “With that kind of attitude, he will never be able to fix the FBI, which is badly broken despite having some of the greatest men & women working there!”

During a press conference at the State Department, Lavrov also took the opportunity to complain about US conclusions on Russian election interference, saying the current atmosphere in Washington smacks of the McCarthyism of the 1950s.​

“Our joint work was hindered and continues to be hindered by the wave of suspicions that have overcome Washington,” Lavrov said, adding that “speculations about our alleged interference in domestic processes in the US are baseless … no one has given us this proof because it does not exist.”

Lavrov offered to publish diplomatic correspondence between Moscow and Washington from October 2016 to November 2017 that would “dispel all suspicions that are baseless.”

Pompeo pushed back on Lavrov’s assertion that the Trump administration “refused” to allow Moscow to publish the correspondence.

“We’ll publish all the documents we think appropriate,” Pompeo said. “We think we’ve shared plenty of facts to show what happened in the 2016 election with our Russian counterparts. We don’t think there’s any mistake about what really transpired there.”

Referring to his discussions with Lavrov, Pompeo also said he raised “interference in our domestic affairs,” and added that, “I was clear, it’s unacceptable.”

“Should Russia or any foreign actor work to undermine our democratic” process, the Trump administration will take steps, Pompeo said.

When a reporter challenged Lavrov’s assertion that the US has provided no proof of Moscow’s interference by asking if Lavrov had read the Mueller report, Lavrov sidestepped by shifting the focus. “We read it,” Lavrov said. “There was no proof of any collusion.”

Pompeo told an interviewer Monday that the timing of Tuesday’s meetings wasn’t meant to coincide with the impeachment inquiry.

“This is something that Foreign Minister Lavrov and I have been working for a long time,” Pompeo told One America News Network on Monday. “We didn’t pick this date to coincide with the process on Capitol Hill, but we can’t allow the zaniness that’s taking place on Capitol Hill to impact our job — the President’s job, it’s my job — to keep the American people safe, to continue our diplomatic undertakings. We’re not going to let that activity distract us from this important work.”