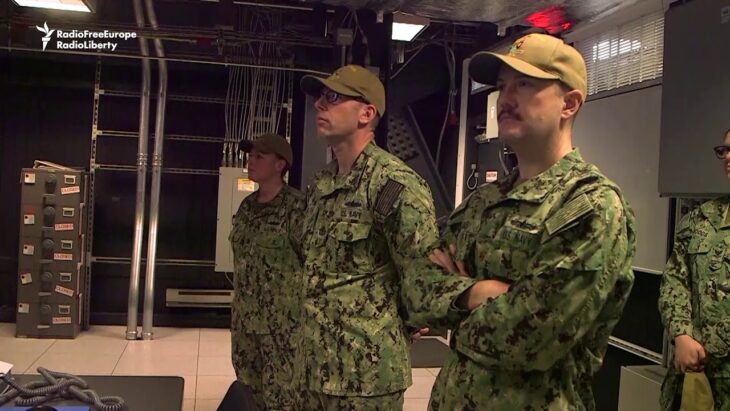 NATO’s land-based missile defense system in southern Romania has been a bone of contention between the alliance and Russia since it began operations at the start of 2016.

Russia claims the facility, along with a similar NATO base in Poland, are meant to undermine Moscow’s nuclear deterrent.

But now, ahead of NATO’s December 3-4 summit in London, the alliance has opened the facility at Romania’s Military Base 99 for a tour by a group of journalists and ambassadors to Romania from 20 NATO members states.

The November 19 visit marked the first time a group of civilians has been given a formal tour of the Aegis Ashore land-based defense system at the town of Deveselu, about 180 kilometers west of Bucharest.

Romanian Defense Minister Nicolae Ciuca said the tour was an initiative in “transparency” that demonstrates the $1 billion facility has “a purely defensive nature.”

The U.S. Navy commander in charge of the facility rejected the Kremlin’s claims –insisting it is “purely defensive” and designed only to protect Europe from possible ballistic missile attacks launched from the Middle East.

“The only thing that we have with respect to capabilities is the ability to launch SM-3 Block IB interceptors against ballistic missiles inbound from Iran,” Commander John Fitzpatrick told RFE/RL in the control room of the missile defense base.

Fitzpatrick said the 24 SM-3 ballistic missile interceptors at the facility are mounted on a “Mark 41 Vertical Launch System.” The same launchers can be used to fire a range of surface-to-air missiles as well as Tomahawk cruise missiles and other offensive weapons.

But Fitzpatrick said the way those launchers have been “configured” and “installed” means that “the only thing it can launch are those SM-3 ballistic missile interceptors.”

“There is no other capability that this site has right now, and it would take extensive changes, industrial-scale changes, to make any difference,” Fitzpatrick explained.

In the main operation center of the facility, the ambassadors and journalists were allowed to see the consoles used by U.S. Navy sailors to control the missile defense shield – which has never fired a missile and is banned from carrying out test launches.

Each operator’s station at Deveselu contains three computer screens along with communication systems and launch switches that would be engaged to fire the SM-3s at any incoming missiles during an attack on Europe.

The ambassadors on the tour also gathered in a briefing room where U.S. and Romanian military officials explained the detectors that warn of an incoming missile attack, the facility’s Romanian security detachment, and the missile launch systems.

Altogether, there are about 500 Romanian soldiers, 250 U.S. troops, and other personnel working at Military Base 99.

“We are working together even if we are three units. Our mission is to keep the system functional 24 hours a day,” Romanian base commander Colonel Razvan Bratulescu told RFE/RL.

While Russia has complained about NATO’s expansion to include countries that had been in the Eastern Bloc during the Soviet era, NATO’s easternmost members see the alliance as the main source of security against growing Russian aggression.

Romania, which joined the alliance in 2004, also considers its strategic partnership with the United States as a security guarantor.

But concerns have risen in the alliance since early November when French President Emmanuel Macron told The Economist magazine that Europe can no longer rely on the United States to defend its NATO allies.

“What we are currently experiencing is the brain death of NATO,” Macron told The Economist, adding that Europe is on “the edge of a precipice” and will “no longer be in control of our destiny” unless it starts thinking of itself strategically as a geopolitical power.

France’s ambassador to Romania, Michele Ramis, told RFE/RL during the tour in Deveselu that Macron “was not commenting in any way on the structure of the NATO alliance.”

“What the president said is that the military structure, the chain of command, is working very well,” Ramis said. “He just said that from the political point of view, he would have liked to have more consultation” between NATO allies.

She said Macron may have made his remarks “just to provoke reaction.”

“It’s a political statement,” Ramis said. “He’s not talking about the value of the structure.”

Those issues are expected to be raised in London when NATO leaders gather to mark the alliance’s 70th anniversary and discuss its future direction.

NATO has said that the summit, including an event called NATO Engages, will “jointly assess challenges and opportunities and highlight NATO’s enduring value as it adapts to a changing world.

U.S. President Donald Trump also is expected to try to convince U.S. allies at the summit that they should increase their defense spending.

Hans G. Klemm, the U.S. ambassador to Romania, told RFE/RL that Trump will be pushing for “fair burden sharing.”

“All allies should realize their commitment to spend at least 2 percent of national output on defense as Romania is doing,” Klemm said.