Please use the sharing tools found via the share button at the top or side of articles. Copying articles to share with others is a… 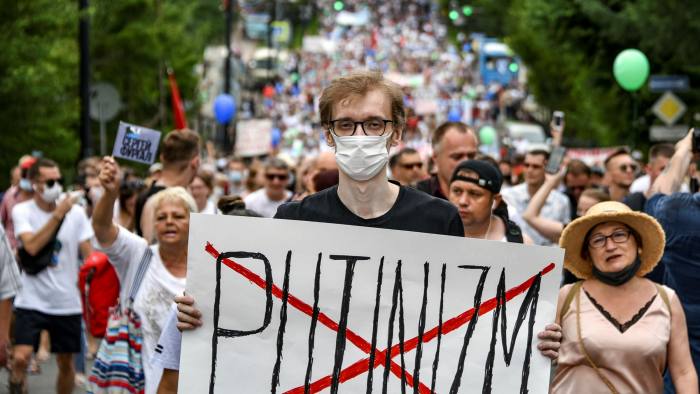 Please use the sharing tools found via the share button at the top or side of articles. Copying articles to share with others is a breach of FT.com T&Cs and Copyright Policy. Email licensing@ft.com to buy additional rights. Subscribers may share up to 10 or 20 articles per month using the gift article service. More information can be found here.
https://www.ft.com/content/31c38d95-23d1-4514-bad7-513b068ea0d9?fbclid=IwAR3-KQmlF680Iu2p1l59hn_WJX-YbpqEsfLIh_6NVyIACNHiMTCFjR2VWKg

If Russian president Vladimir Putin was hoping for a political honeymoon after successfully rewriting the country’s constitution to potentially give him two more terms in office, he was mistaken. Just 10 days after winning a popular vote designed to depict the country as united behind its leader, protests erupted that instead demonstrated the level of simmering popular discontent. They also underscored the gulf between the president’s Kremlin and many ordinary citizens after his more than two decades in power. Last weekend more than 20,000 people took to the streets of Khabarovsk, a city in Russia’s far east on the border with China, in support of the former state governor who was dismissed by Mr Putin earlier this month and charged with attempted murder. The protests — the largest ever seen in the city — have continued daily since July 11, two days after Sergei Furgal, who is not from Mr Putin’s ruling United Russia party, was arrested, flown to Moscow and detained. Since then, the protesters’ demands have morphed from the local to the national: from demanding a fair trial for Mr Furgal to calling for Mr Putin to step down.