It is the moment when a life changes. When plain clothes officers from Russia’s top spy agency, the FSB, come for you. Handcuffs and cameras… 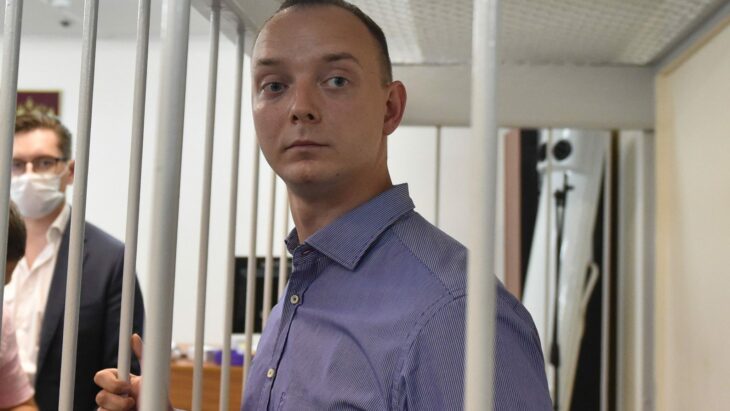 It is the moment when a life changes.

When plain clothes officers from Russia’s top spy agency, the FSB, come for you.

Handcuffs and cameras at the ready, the high-quality video handouts from the FSB press service after the arrest are intended as a warning and to scare the widest possible audience.

This is what happened last week to 30-year-old Ivan Safronov – a former journalist and long-time member of the Kremlin reporter pool who had recently started work at Russia’s space agency Roscosmos.

On Monday, he will face charges of alleged treason.

According to his lawyer, investigators allege that in 2017 Safronov passed information regarding Russian arms ties with an unnamed African or Middle Eastern state to Czech intelligence, after five years of contacts.

Over that period, Safronov was covering defence and security issues first at Kommersant and then Vedemosti – two major Russian broadsheets.

In an initial court hearing, Safronov denied the charges.

Working as a journalist in Russia has never been easy, but there is a sense now among colleagues that the outlook is darkening.

“I think many people who cover that beat, who write for defence or security or foreign policy, will now think twice before trying to get certain information, or publishing that information,” says Kommersant’s Elena Chernenko who had worked with Safronov for years.

In 2007, he fell from a window in an apparent suicide while investigating a story about prohibited Russian arms sales to Iran via Belarus. His report was never published.

Ms Chernenko says no one at the newspaper believed Safronov’s father took his own life and they do not believe his son betrayed his country.

“We are all guessing what is behind this, we don’t know. But Ivan is a patriot,” she said.