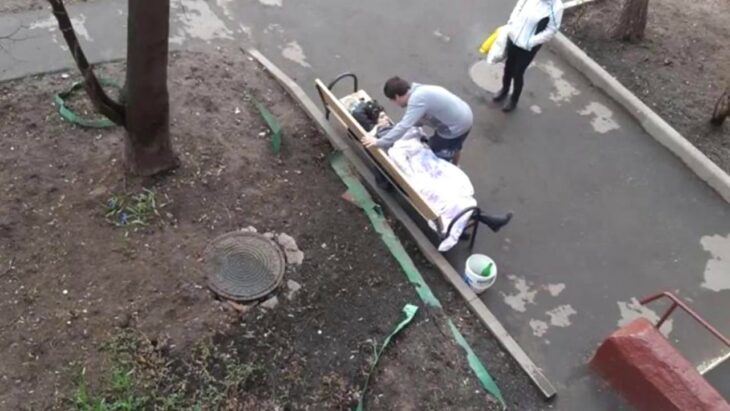 Authorities in Moscow are reportedly investigating the death of a woman on a bench outside her home on the day she was discharged after testing negative for the coronavirus.

Surveillance footage shared by Russia’s REN TV broadcaster showed the woman it identified as Yelena Chuklova, 48, moving around in pain on the bench as social workers and neighbors tried and failed to gain entrance to her apartment block. The outlet reported that Russia’s Investigative Committee has opened an inquiry into the reports of the woman’s death.

“The woman felt worse near the entrance, the social workers immediately called an ambulance,” the Moscow Mayor’s Office’s health department said in a statement Monday. “The ambulance arrived within 11 minutes and, unfortunately, pronounced her dead.”

The woman died Saturday, a day after she was hospitalized with suspected pneumonia, the health department said. It did not identify her by name.

An autopsy showed the victim died from acute heart failure, the health department said. It noted that she had cardiomyopathy, a heart muscle disease that can lead to heart failure, and “pronounced changes in the organs of alcoholic origin.”

“There were no signs of pneumonia or other infectious diseases,” the health department said.

An internal investigation has been launched in connection with the incident, it added.

The Investigative Committee’s Moscow branch has not yet commented on the woman’s death in an official capacity.

Meanwhile, Moscow’ crisis center has said that 60% of the city’s confirmed coronavirus patients were asymptomatic. The Russian capital’s mild Covid-19 cases are treated at home instead of in the hospital.

Moscow had reported 204 deaths among coronavirus patients as of Monday.