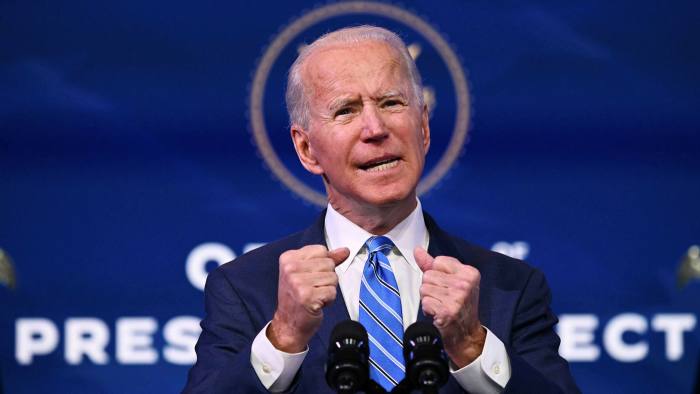 The action came as the administration declassified an intelligence finding that the F.S.B., one of Russia’s leading intelligence agencies, was responsible for the poisoning of Aleksei A. Navalny.

The Biden administration on Tuesday declassified an intelligence finding that the F.S.B., one of Russia’s leading intelligence agencies, orchestrated the poisoning of the opposition leader Aleksei A. Navalny, and announced its first sanctions against the Russian government for the attack and his imprisonment.

The sanctions closely mirrored a series of actions that European nations and Britain took in October and expanded on Monday. Senior officials said the move was part of an effort to show unity in the Biden administration’s first confrontations with the government of President Vladimir V. Putin of Russia.

But none of the sanctions were specifically directed at Mr. Putin or the oligarchs who support the Russian leader.

Just as President Biden held back last week from direct sanctionsagainst Crown Prince Mohammed bin Salman of Saudi Arabia for his role in the operation that killed Jamal Khashoggi, the Saudi dissident, the American sanctions did not touch Russia’s senior leadership.

Mr. Navalny’s supporters praised the sanctions announced on Tuesday, although the measures fell well short of the sweeping action that the opposition leader’s team had called for as he was being sentenced to two and a half years in prison. One of Mr. Navalny’s top allies, Vladimir Ashurkov, sent Mr. Biden a letter in January arguing that only sanctions on top Russian decision makers, along with the business figures he said held their money, could “make the regime change its behavior.”

“The most painful sanctions, which, unfortunately, neither Europe nor the United States have yet reached, would be sanctions against oligarchs,” Maria Pevchikh, another Navalny ally, posted on Twitteron Tuesday.

In announcing the role of the F.S.B., or Federal Security Service, in the poisoning, American intelligence officials were confirming the reports of many news organizations, some of which traced the individual agents who tracked Mr. Navalny and attacked him with Novichok, a nerve agent that Russia has used against other dissidents. It was unclear if the United States planned to release a formal report, as it did last week when it confirmed two-year-old findings on Mr. Khashoggi, or whether it would simply summarize the key finding in the Navalny case.

The sanctions are notable chiefly because they are the first Mr. Biden has taken in the six weeks since he became president. While most presidents have come into office declaring they would seek a reset of relations with Russia, Mr. Biden has done the opposite. He has warned that Mr. Putin is driving his country into an era of authoritarianism and promised to push back on human rights violations and efforts to destabilize Europe.

One official told reporters on Tuesday morning that the Biden administration was not seeking to reset relations or escalate confrontations. The test may come in the next few weeks, when the administration is expected to announce its response to the SolarWinds cyberattack, in which suspected Russian hackers bore deeply into nine government agencies and more than 100 companies, stealing data and planting “back doors” into their computer networks.

While the Navalny case was a vivid example of Russian brutality — his F.S.B. attackers stalked him as he traveled across Europe and apparently applied the nerve agent to his underwear — the Biden administration sees SolarWinds as a more direct attack on the United States. Jake Sullivan, the national security adviser, said the response “will not simply be sanctions” and hinted at some kind of covert response as well.

But in the Navalny case, only sanctions were announced — and they might have little effect. History suggests that sanctions work better, if at all, on smaller, less powerful nations, and then only over time. They are often used to signal disapproval without much expectation of changed behavior.

As Carl Bildt, the former prime minister and foreign minister of Sweden, said: “Sanctions have become very popular in Congress, and they’re becoming popular with the E.U., too. If you don’t have any other instruments, sanctions are very popular.”

In 2018, the Trump administration announced sanctions against Russia for the use of a nerve agent against Sergei Skripal, a former Russian double agent living in Britain, and his daughter, Yulia, and expelled dozens of Russian diplomats. But that proved little deterrent to the F.S.B. using the same technique against Mr. Navalny and Vladimir Kara-Murza, a Russian dissident who was poisoned, in 2015 and 2017, and nearly died both times.

A senior American official said that the action announced on Tuesday was in many ways catching up to designations that the Europeans had already made. The official said the main effort was to assure that the United States and Europe were “on the same page” after several months in which European sanctions went beyond any imposed by Washington.

The European Union on Monday approved sanctions on four senior Russian officials considered responsible for the prosecution and imprisonment of Mr. Navalny.

The decision, approved by the member states, went into effect on Tuesday and represents the first time the European Union has used new powers under its version of the Magnitsky Act, which allows Brussels to impose sanctions on human rights violators worldwide.

The new sanctions are narrowly drawn to target those who were directly and legally responsible for Mr. Navalny’s conviction in what appeared to be a show trial and his subsequent imprisonment upon his return to Russia from Germany, where he recuperated from the poisoning.

The European Union has already imposed sanctions on six Russians and a state scientific research center in response to the attack on Mr. Navalny.

The Treasury Department froze the assets of Alexander Bortnikov, the director of the F.S.B., but officials acknowledged that given his position he was unlikely to have left assets in the United States or Europe.

The European Union was under further pressure to respond to Mr. Navalny’s conviction last month to another two and a half years in prison after Josep Borrell Fontelles, the bloc’s foreign policy chief, made a controversial visit to Moscow, failed to visit Mr. Navalny and was criticized for his mild response to accusations by Sergey V. Lavrov, the Russian foreign minister, that the European Union was “an unreliable partner.”

During Mr. Borrell’s visit, on Feb. 5, Russia expelled three diplomats from Germany, Poland and Sweden — all members of the European Union — for monitoring the protests after Mr. Navalny’s jailing, without informing Mr. Borrell. That produced the tit-for-tat expulsion of three Russian diplomats from the three countries.

European foreign ministers agreed on the sanctions a week ago, although some ministers called for a wider net, including Russian oligarchs and supporters of Mr. Putin. But Mr. Borrell argued that legally the actions had to be limited to those directly responsible for the acts that were deemed sanctionable.

Even though the European and American sanctions fell short of targeting prominent Russian oligarchs, officials in Moscow were quick to condemn the Biden administration’s move.

“I have no doubt that the new sanctions will not go unanswered,” Leonid E. Slutsky, the foreign affairs committee chairman in Russia’s lower house of Parliament, told the Interfax news agency. “This is yet another step toward the degradation of relations between Russia and Western countries.”

David E. Sanger is a White House and national security correspondent. In a 38-year reporting career for The Times, he has been on three teams that have won Pulitzer Prizes, most recently in 2017 for international reporting. His newest book is “The Perfect Weapon: War, Sabotage and Fear in the Cyber Age.”  @SangerNYT • Facebook

Steven Erlanger is the chief diplomatic correspondent in Europe, based in Brussels. He previously reported from London, Paris, Jerusalem, Berlin, Prague, Moscow and Bangkok. @StevenErlanger