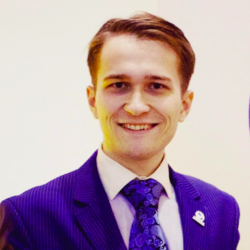 Program Coordinator of the Personnel Reserve of the Free Russia Forum, Policy Analyst at the FRF (Moscow)

Yury Terekhov was born in 1990 in Arkhangelsk. In 2007, he won the All-Russian Olympiad in History. In 2011, he graduated from the Moscow State Institute of International Relations (MGIMO) with a degree in Oriental Studies, and in 2015 he graduated from the Jagiellonian University in Krakow with a Master’s degree in International Relations. Since 2011, he has been an active participant in the Russian opposition, and was a member of the right-liberal movements Russian Civil Union and National Democratic Alliance. He participated in protests and rallies, worked in elections as an activist in election campaigns, a member of election commissions, and as an international observer in elections abroad.

Since 2013, he was the editor of the Rufabula independent analytical online magazine, which was shut down in Russia by a decision of the Prosecutor General’s Office in the summer of 2017. In 2016, he completed a research internship at the Cato Institute in Washington, DC. In 2016-2017, he was a research fellow at the National Coalition Supporting Eurasian Jewry (Washington, DC), and in 2019, he completed practice at the Americans for Prosperity in Phoenix, Arizona. Since 2017, Yury has been participating in the Free Russia Forum. Since 2019, he has been a policy analyst with the Free Russia Forum, and since 2020, he has been coordinating the Personnel Reserve project.