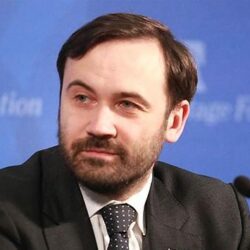 Since 1996 till2003he worked in large companies (incl. Schlumberger/GeoQuest, YUKOS, IBS) on leading positions, associated with new technologies implementation into production. In 2007 he was elected as a deputy of the State Duma RF of V session under lists of the party “Fair Russia” from Novosibirsk region. In 2011 he was re-elected into the State Duma of VI session, became member of Economic Policy, Innovation Development and Entrepreneurship Committee, having headed Innovation and Venture Investments Sub-Committee.

Since 2010 he actively swung into action for creation of Skolkovo project. Advisor of V.F. Vekselberg for commercialization and international development.

Permanent member of organizing committees of Russian Social Forums, uniting protest and social movement of the country. Member of non-government public organizations – Council of Foreign and Defense Policy (CFDP) and Council of National Strategy (CNS), coordinator of expert services for legislative support of innovation activity in the Institute of Contemporary Development (INSOR). In 2009-2012 – the first deputy head for expert services of the Council of Information Society Development at the President of RF.

In 2011 became one of leaders of movement “White band” and mass protest meetings, started after elections into the State Duma in December.

In 2014 was the only deputy of the State Duma, who elected against annexation of the Crimea and war in the territory of Ukraine.

Since 2018 – member of the Permanent Committee of the Free Russia Forum.