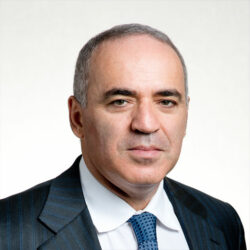 In 1985 Kasparov defeated Anatoly Karpov in World Championship match and became the thirteenth World Chess Champion. He protected this title five more times. Currently he maintains the best rating in the world, in spite of match defeat by Vladimir Kramnik in 2000.

In 1984 Kasparov entered CPSU, elected as member of the Central Committee of the All-Union Leninist Young Communist League. In 1990 left CPSU. In May 1990 he took active participation in establishing Democratic Party of Russia (DPR). In June 1993 he took participation in establishment of pre-election block “Choice of Russia”. In 1996 he participated in pre-election campaign of Boris Yeltsin. In 2001 he came out for NTV.

In March 2005 Kasparov won another Super Tournament in Linares (Spain) and announced a halt of his chess career. Kasparov’s decision of leave world of professional chess was associated with his intention to devote larger part of his time to public and political activity.

Garry Kasparov is co-chairman of the All-Russian Civil Congress “Russia for Democracy, against Dictatorship”.

In 2005 public and political movement the United Civil Front was established by his initiative and activist of the movement elected Kasparov as Chairman of the Movement. For two years of active political activity Kasparov united over 30 regions of Russia, met thousands of the Russian citizens. In 2006 coalition of political and civil forces “Other Russia” was established with the participation of Kasparov.

In 2007 at the congress of the coalition “Other Russia” Garry Kasparov was elected as united candidate from opposition for presidential elections 2008. Authorities gave no possibility for initiative group for Kasparov’s nomination to conduct meeting in Moscow, rejecting in rent of 7 premises.