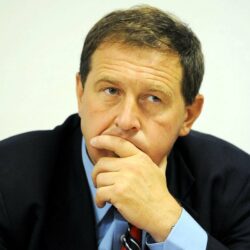 Economist, Ph.D. in economics, former economic policy advisor to the President of Russia, senior scientific researcher of the Center for Global Liberty and Prosperity at the Cato Institute in Washington, member of the Permanent Committee of the Free Russia Forum, mentor of the Analytical Departament Program of the PR-FRF

He graduated from economic department of Leningrad University in 1983, receiving a Ph.D. in economics in 1987.

Since 1983 till 1990 he taught for the International Economic Relations Department.

In April 1992 he was appointed as the first deputy head of the Economic Reform Centre of the Russian Government.

Since 1993 till February 1994 – head of the Analysis and Planning Group of the Chairman of the Government of RF.

Since July 1994 till April 2000 – director of Institute for Economic Analysis – independent non-profit organization (analysis of macro-economic situation in Russian and CIS).

Since December 1999 till April 2000 – expert of “Center of Strategic Development” Foundation.

Since May 2000 till September 2004 – Representative of the President of Russia with regard to case of group of leading industrial countries and communications with representatives of country leaders from “Group of Eight” (Russian sherpa), chairman of Cross-Agency Commission for Participation of the Russian Federation in “Eight”.

In September 2004 he resigned from his position as Russian sherpa.

On 27th December 2005 he resigned from his position of the advisor of the President of RF.

Since January 2006 – President of the Institute for Economic Analysis.

Since September 2006 – senior scientific researcher of the Cato Institute.

In 2012 he was elected in Coordination Council of the Opposition.

In 2018 he was elected into the Permanent Committee of the Free Russia Forum.