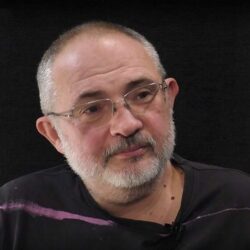 Russian completist, gallerist and publisher, and art-manager. Former director of Perm museum of modern arts PERMM. Political technologist, one of founders of “Effective Politics
Foundation”, member of Public Chamber of 2010-2012 session. Member of the Permanent Committee of the Free Russia Forum.

In 1977 finished school No. 34 of Kishinev, in 1983 – Moscow Institute of Communications at specialty engineer.

In 1987 Guelman organized the first in his life exhibition.

In 1990 according to advice Guelman opened one of the first in Russian private galleries of modern arts (Guelman Gallery), which existed up to 2012.

In 2014 he moved to Montenegro to realize culture projects. Since 2015 there is art-residence Dukley European Art Community (abbreviated DEAC), established by three people: Neil Emilfarb, Petar Cukovic, and Marat Guelman.

In April of 2018 he was elected into the Permanent Committee of the Free Russia Forum.