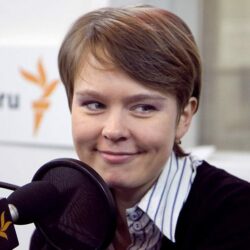 In 1999 during study in Moscow Aviation Institute she started working as programming engineer.

In 2000 graduated from two departments of MAI – engineering at specialty “engines of aircrafts” and economic. In the same year she moved to company “Inspro” as consultant, then headed department for automation systems implementation of the company. At the end of the same year became head of projects for business information management in holding “Razgulyay Center”.

In 2002 became head of the project for creation of development project management system of the holding Business-Novation, LLC.

In 2005 graduated from the Academy of National Economy of the Russian Federation Government​, having received master’s degree in business administration.

Since 2009 – leader of “Defenders of Khimki Forest movement”.

In 2011 was awarded by the US State Department “For bravery”, which is awarded to distinguished women of the world for bravery and leadership skills demonstrated in a fight
for social justice and observance of human rights.

In 2011 for her activity to protect environment she was awarded Goldman Environmental Prize.

In 2012 he was elected into the Coordination Council of the Opposition.

In 2012 participated as candidate for mayor elections in Khimki, where she got the second place.

In April 2018 on 5th Free Russia Forum in Vilnius she was elected into the Permanent Committee of FRF.