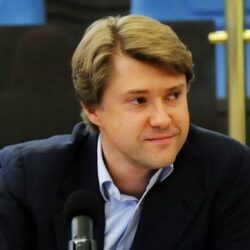 Russian opposition politician. Ashurkov is a leading figure in the opposition movement in Russia. He helped to found the Anti-Corruption Foundation and the Party “Russian of the Future” (formerly named the – Party of Progress).

He was forced to leave the country as a result of politically motivated prosecution by the Russian authorities. Now based in London, Mr. Ashurkov continues his public and political activity closely, with Aleksey Navalniy and other opposition leaders in Moscow.

Before Ashurkov committed himself to public and political activity he worked at various large Russian financial companies. From 2006 to – 2012, he worked as Asset Management Audit Director at the consortium “Alfa-Bank”. Prior to that, he worked in the investment and bank and transport sectors. Ashurkov graduated from the Wharton School of Business of the University of Pennsylvania and Moscow Institute of Physics and Technology.

In 2018, he was elected to the Permanent Committee of the Free Russia Forum, where he leads civil projects funding working party.