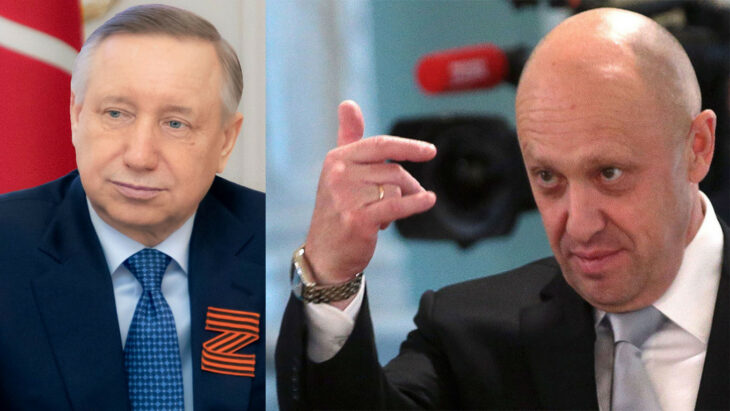 The vicious public campaign being waged by controversial businessman Yevgeny Prigozhin against St. Petersburg Governor Alexander Beglov has rocked Russian society, which is not accustomed to open conflicts of this nature within Russia’s power vertical.

The feud would appear to violate the fundamental principles of Putin’s power system, in which airing dirty laundry has always been considered a cardinal sin, and any attempt to resolve important issues by resorting to public stunts was doomed to fail.

It had seemed that this rule was set in stone, yet no one is reprimanding Prigozhin, an ex-con who later set up a catering company used by the Kremlin for official events, and later still, an army of mercenaries. No less surprising is that the hapless governor of Russia’s second city seems unperturbed to be under attack by the owner of not one but two private armies: one military and one media.

It’s only in recent months that the conflict between Prigozhin and Beglov has become public, but the feud dates back to almost immediately after Beglov’s election as governor in September 2019. Prigozhin, who by then had created a many-tentacled media network as well as a notorious bot farm, tried to help the governor’s office during the election campaign.

It’s not clear whether Beglov had actually recruited Prigozhin for these services, or whether the tycoon was helping at his own initiative, though Prigozhin hinted in a recent interview that he had financed Beglov’s campaign and that the governor had then failed to pay him back as promised.

Soon after the elections, the friendship soured. Prigozhin’s version of events is that Beglov keeps stalling infrastructure projects that the entrepreneur is seeking to build in St. Petersburg at a cost of hundreds of billions of rubles: not even for the profit, naturally, so much as out of love for his native city.

It’s true that the governor’s office in Smolny is blocking Prigozhin’s development projects, such as plans to redevelop territory in Gorskaya on the Gulf of Finland. More recently, the city authorities were reportedly dragging their feet issuing a permit needed to open a business center built by Prigozhin. Shortly before the scheduled opening of the building, its name was changed to PMC Wagner Center, in honor of the private military company that Prigozhin recently admitted to founding, after years of denying it. The business center eventually opened after several days of public scrutiny.

Prigozhin’s own political ambitions have also seemingly been thwarted. It’s widely believed that in the 2019 St. Petersburg municipal elections held at the same time as the gubernatorial election, Prigozhin tried and failed to get his own team elected to the local authorities of Vasilyevsky Island, one of the city’s districts.

Two years later, ahead of elections to the St. Petersburg legislative assembly, Prigozhin threw his support behind the Rodina (Motherland) party, whose party list was headed by Maxim Shugalei, who had made headlines for serving time in a Libyan jail. The party was, however, barred from the elections over irregularities in the signatures collected in support of their bid, while Shugalei himself lost in the single-mandate district for which he ran.

Beglov is hardly a political heavyweight that it would be unwise to even attempt to take on. During the height of the COVID pandemic, when a curfew was in place for the city’s eateries and bars, a whole host of bars openly flaunted their breaking of the curfew for a full two months before Smolny took any action (it eventually opened a bribery case against the protest’s leader). Similarly, the governor quickly backed down when a law he had introduced on demolishing Khrushchev-era prefabricated apartment buildings in the city was met with public outrage.

For several years, local media linked to Prigozhin have seized on every mistake made by the city authorities. The businessman even tried to harness the city’s most powerful civic movement — that of architectural preservationists — and set up his own preservationist society headed by none other than Shugalei. Now Prigozhin has progressed from insulting Beglov (stating that the post of city governor was “above his pay grade”) to calling on the Prosecutor General’s office to investigate him for state treason.

The St. Petersburg authorities have largely ignored Prigozhin’s provocative attacks, saying only that certain “criminal elements” are not happy with the reforms being carried out in the city because they will deprive them of illegal income. Nor do the businessman’s sorties appear to be causing any noticeable damage to the local government’s reputation. Beglov had no real popularity in St. Petersburg to be dented anyway, while within the Kremlin, Prigozhin does not have a deciding vote on whether Beglov should be replaced: otherwise, that would have happened long ago.

What’s interesting about the feud between Prigozhin and Beglov is not so much why public conflicts within the power vertical that would once have been impossible are now taking place. That can be put down to the times we are living in: with NATO at the gate, the Kremlin has no time to deal with such trifles. The real intrigue is why a notorious wartime figure who has been portrayed by both Russian and international media as one of the most dangerous and powerful people in Russia cannot even resolve some trivial day-to-day issues in his hometown.

Perhaps supposedly powerful people are not as powerful as they seem, and what we are actually seeing is how helpless the Russian elites are, only acquiring real power when they become part of a process controlled by the Kremlin, be that war, when Prigozhin is permitted to trawl prisons in search of recruits for Wagner, or elections, when the system built by the Kremlin enables Beglov to become governor without any difficulty. Because of this, and also thanks to their high profiles, they become the subjects of inflated expectations that they cannot possibly live up to in practice.

It also appears to show that it’s impossible to be in control of a society that has descended into hysteria while remaining a cool-headed pragmatist for whom the greatest sin is airing dirty laundry. It’s too much to expect members of the Russian elite to rant and rave in the State Duma or at the UN General Assembly one day, and yet remain calm and sober-headed in their interactions with each other the next.

In this respect, Prigozhin constitutes if not a new Russian elite, then at the very least a new pattern of elite behavior. For him, it’s more important to be seen than to get what he wants. What seems shocking to people right now will soon become par for the course.

This article was first published by the Carnegie Endowment for International Peace.

The views expressed in opinion pieces do not necessarily reflect the position of The Moscow Times.
Source: www.themoscowtimes.com
Opinion