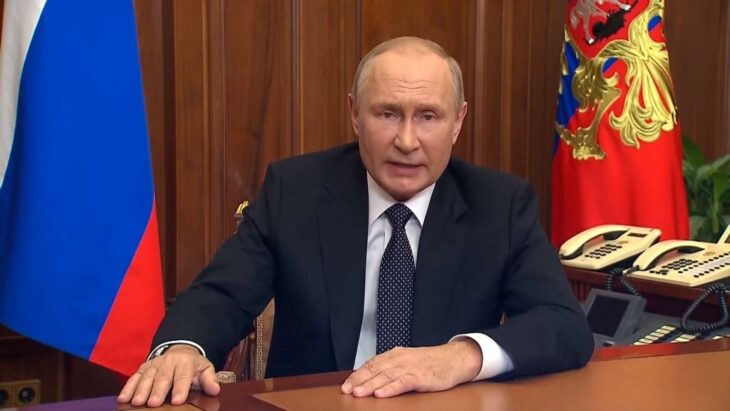 With his forces retreating in Ukraine, Russian President Vladimir Putin has once again threatened to turn to nuclear weapons, most likely what are often called tactical nuclear weapons.

In a speech last week, he warned that, “In the event of a threat to the territorial integrity of our country and to defend Russia and our people, we will certainly make use of all weapon systems available to us. This is not a bluff.”

Russian weapon systems include 4,477 deployed and reserve nuclear warheads, with about 1,900 of these being “non-strategic” warheads, otherwise known as tactical nuclear weapons, according to the Federation of American Scientists.

Here’s what you need to know.

Tactical warheads refer to ones designed for use in a limited battlefield, say to destroy a column of tanks or an aircraft carrier battle group if used at sea. These warheads, with explosive yields of 10 to 100 kilotons of dynamite, are also called “low yield.”

In contrast, Russia’s most powerful “strategic” nuclear warheads have explosive yields of 500 to 800 kilotons and are designed to destroy entire cities – and then some.

The reference to “low yield” for tactical weapons is somewhat misleading as explosive yields of 10 to 100 kilotons of dynamite are still enough to cause major destruction – as the world discovered in 1945 when the US dropped atomic bombs on Hiroshima and Nagasaki in Japan.

Those bombs were the equivalent about 15 and 21 kilotons of dynamite, respectively – within the ballpark of Russia’s tactical nuclear weapons.

The initial blasts at Hiroshima and Nagasaki killed about 70,000 and 35,000 people instantly, and tens of thousands more later died from the radiation released, according to US government archives.

Alex Wellerstein, director of science and technology studies at the Stevens Institute of Technology in New Jersey, says the real difference in nuclear weapons is not really in what their explosive yield is but what their targets are.

“The atomic bombings in Japan had been ‘strategic’ attacks aimed mainly at destroying morale and terrorizing the Japanese high command into surrender. What made 15 kilotons a ‘strategic’ yield depended on where it was aimed,” Wellerstein wrote on the Outrider security blog earlier this year.

Others, including former US Defense Secretary James Mattis, say there’s no difference at all.

“I don’t think there is any such thing as a ‘tactical nuclear weapon.’ Any nuclear weapon used any time is a strategic game-changer,” told a congressional hearing in 2018.

What would happen if Russia deployed one?

Russia (and before it, the Soviet Union) has built and maintained a large stockpile of tactical nuclear weapons.

The initial thinking was that using a nuke on a battlefield gave leaders an option to make a decisive strike that could stave off defeat without resorting to the use of their biggest nuclear weapons, which after a counterattack would bring a “civilization-ending nuclear exchange,” according to the Union of Concerned Scientists.

On its website, the organization calls that thinking “flawed and dangerous.”

“Tactical nuclear weapons … introduce greater ambiguity, raising the possibility that a country might think it could get away with a limited attack,” the organization said.

Some analysis supports that theory.

A commentary published during the summer by Sidharth Kaushal and Sam Cranny-Evans at Britain’s Royal United Services Institute (RUSI) says that the use of tactical nuclear weapons against command centers or air bases in Europe could limit civilian casualties in surrounding areas.

For instance, the RUSI report says use of a tactical nuke in the Sulwaki Gap, the land border between NATO allies Poland and Lithuania that separates Russian Kaliningrad from its neighbor Belarus, could only cause civilian casualties in the hundreds.

The reality is likely to be far from that.

“US war games predict that a conflict involving use of tactical nuclear weapons will quickly spiral out of control,” the Union of Concerned Scientists blog said.

“A Princeton University simulation of a US-Russian conflict that begins with the use of a tactical nuclear weapon predicts rapid escalation that would leave more than 90 million people dead and injured,” it said.

Responding to Putin’s threat last week, the International Campaign to Abolish Nuclear Weapons (ICAN) says the Europe of 2022 is a much more dangerous place to use nuclear arms than the Japan of 1945, which had a smaller population and was relatively isolated.

In Europe today, “a single nuclear detonation would likely kill hundreds of thousands of civilians and injure many more; radioactive fallout could contaminate large areas across multiple countries,” ICAN said on its website.

“Emergency services would not be able to respond effectively and widespread panic would trigger mass movements of people and severe economic disruption. Multiple detonations would of course be much worse,” it added.