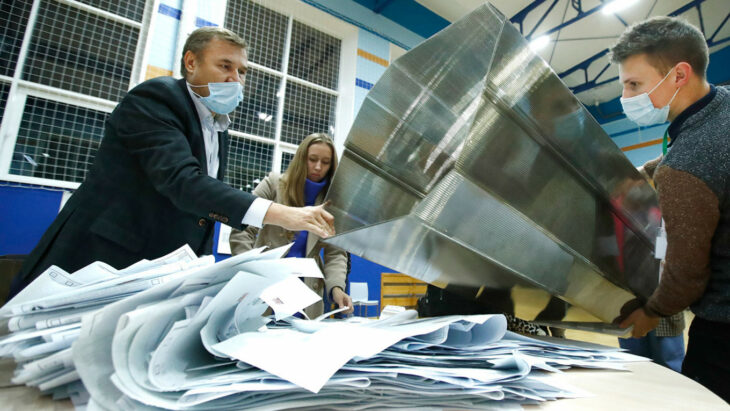 Half of all the votes cast for the ruling party in Russia’s parliamentary elections were likely fraudulent, according to analysis by independent statisticians.

The pro-Kremlin United Russia party won a landslide victory in Russia’s State Duma elections over the weekend, securing 324 of the lower chamber’s 450 seats — a supermajority that allows them to enact changes to the constitution.

Russia’s opposition has alleged massive election fraud, and videos flooded social media during the vote showing apparent ballot stuffing. Questions have also been raised over a significant delay in the publication of online voting results in the capital Moscow, which eventually overhauled the voting leads secured in the offline vote by opposition candidates.

Independent data scientists and analysts said Tuesday that half of all the votes attributed to United Russia in the official results were probably fake — a level of falsification previously unseen in Russian parliamentary elections.

Prominent physicist Sergei Shpilkin, who has become well-known for his post-election data analysis of possible fraud, estimated on Tuesday that genuine support for United Russia was around 31-33%, while actual nationwide turnout was probably 38%. That compares with official results that saw United Russia score 50% on an official turnout of 52% — suggesting that around 14 million of United Russia’s official votes were fraudulent.

The analysis is based on analyzing results across Russia’s 97,000 individual polling stations to find anomalies and outliers that hint at possible falsification. Statisticians focus on the host of polling stations that recorded high turnout and high vote shares for United Russia — a strong correlation that hints at ballot stuffing.

Because it is believed that falsification does not happen in every polling station, Shpilkin is able to identify the “core” level of support for United Russia and turnout from these “honest” locations. This is then compared with the outliers and polling stations that show high turnout and strong pro-Kremlin votes to estimate the number of votes that were likely falsified on a national scale.

Opinion polls before the election showed nationwide support for the ruling party were at historic lows of below 30%.

Other independent statisticians and election monitors have reached similar conclusions in the wake of the vote, which the opposition has called one of the most fraudulent in Russia’s history.

Alexei Kouprianov, a biologist and big data analyst, also estimated that real support for United Russia was around 30%, not the 50% recorded in the official results.

“The analysis shows that the level of falsification in 2021 was enormous,” he wrote on Facebook. “It is clear from the honest polling stations that support for United Russia is falling and that the Communist Party is growing.”

Data scientist Boris Ovchinnikov said that Shpilkin’s estimate that 50% of United Russia’s votes were falsified should be seen as the “lowest estimate.”

“Deeper analysis could result in a higher estimate for the share of falsification,” he said.

The election monitoring Golos organization, which was banned from observing the elections shortly before the vote, also estimated that around a third of the official votes were fraudulent — a figure which tallies with half, or more, of United Russia’s votes being false.

Kremlin spokesman Dmitry Peskov hailed the “competitiveness, openness and honesty” of the elections, saying it was clear that “United Russia is the main preference of the voters”.