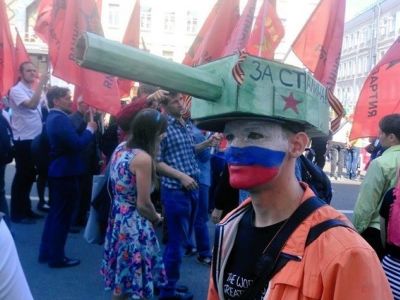 In the wake of Russia’s Victory Day military parade on Sunday, Russian lawmakers plan to ban any comparisons between the Soviet Union and Nazi Germany. The parade marks the 76th anniversary of the end of World War II and, as is traditional, will be held in Red Square.

The bill follows President Vladimir Putin’s orders to prohibit publicly equating the role of the two collaborationist powers during the war. Such moves illustrate that Putin’s expansionist ambitions not only involve the revision of post-Cold War borders but also the rewriting of European history.

The key event in Putin’s restoration mythology is the “Great Patriotic War” that ended in victory over Nazi Germany in 1945. The Kremlin’s historical myths have become state scripture and entail the omission of key events and the whitewashing of Soviet crimes. Histories in Russia remain silent about Stalin’s collaboration with Hitler. The two dictators jointly launched World War Two with the invasion of Poland in September 1939, after signing a nonaggression pact to carve up and incorporate Central-Eastern Europe in their growing empires. Putin has criticized the European parliament and neighboring capitals for condemning the Soviet-Nazi pact.

During years of collusion between Berlin and Moscow, the Gestapo and KGB shared techniques of incarceration, torture, and mass murder. Moscow supplied Germany with fuel, food, and other materials for nearly two years during the war to help Hitler defeat Moscow’s main enemy, the capitalist West. Berlin also enabled Moscow to annex Lithuania, Latvia, Estonia and seize large parts of Romania and Finland.

The Soviet Union did not fight against Nazi Germany until it was attacked in July 1941 when Hitler turned against his partner Stalin. Contrary to Moscow’s depictions, the subsequent Soviet victory on the eastern front was far from glorious and did not “liberate” Europe. The Kremlin’s security forces deported entire nations into the depths of Siberia and Central Asia, eliminated all national liberation and democratic movements across Europe’s East, and implanted repressive communist regimes for almost half a century. To suppress these facts, Moscow has introduced legislation to prosecute criticisms of the Red Army offensive during World War Two, including chronicles of mass murders, expulsions, and rapes committed along their route to Berlin. It also equates Soviet war losses with Russian casualties, thereby whitewashing the deaths of millions of non-Russians along the Eastern Front.

The promoted historical narrative of the “Great Patriotic War” has been employed as a source of national unity and loyalty to the state. The war is a key element in Moscow’s self-glorifying propaganda. This “cult of victory” possesses a rigid dogma that both the state and Russia’s Orthodox Church staunchly defend. Putin uses this creed to legitimize his own rule, to justify his elimination of political opposition, to pursue his neo-imperial project toward vulnerable neighbors, and to rationalize his anti-Western policies. Putinism is depicted as essential for raising Russia as a great power and defeating the West, just as Stalinism was allegedly necessary to modernize the state and defeat Nazi Germany.

The portrayal of World War Two manufactures two stark stereotypes: People who support the Kremlin are automatically labeled “anti-fascists,” and those who oppose Putin’s policies are “fascists” or “Russophobes” regardless of their political persuasions. Hence, the war against Ukraine is presented as a continuation of the Great Patriotic War against the “fascist junta” in Kyiv.

Legitimate celebrations for the end of World War Two and the defeat of Nazism cannot take place in one of the capitals that launched the hostilities and assisted the Nazis. And certainly not in a capital that hides historical facts about the war and engages in new offensives to undermine the independence of neighbors and the integrity of their territories. In his battle with history, Putin is trying to recreate what Stalin first assembled through the murder of millions of civilians and the enslavement of entire nations. Until Russia’s leaders, like those of post-war Germany, apologize and atone for the crimes of their predecessors and refuse to follow in their footsteps, the Victory Day celebrations in Moscow are simply another example of propaganda and disinformation.

Janusz Bugajski is a senior fellow at the Jamestown Foundation in Washington, D.C. His recent book, Eurasian Disunion: Russia’s Vulnerable Flanks, is co-authored with Margarita Assenova. His next book is titled Failed State: Planning for Russia’s Rupture.