President Erdogan warned that he may shut down the main Nato airbase in Turkey, as increasingly toxic relations between Ankara and Washington threatened the home… 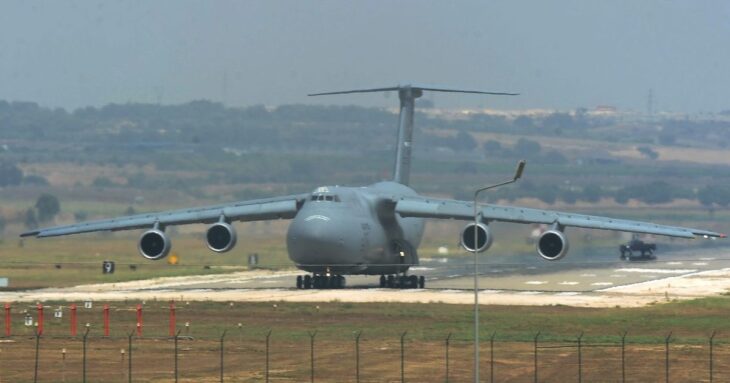 President Erdogan warned that he may shut down the main Nato airbase in Turkey, as increasingly toxic relations between Ankara and Washington threatened the home of US nuclear bombers in the region.

Mr Erdogan made the comments about the Incirlik base, where 5,000 US personnel are based along with 50 nuclear warheads, during a televised interview on Sunday. He also warned that the Kurecik radar station in the eastern province of Malatya could be closed to the US military.

It came after US senators approved a package of sanctions against Turkey in response to Ankara’s purchase of the Russian-made S400 missile-defence system, and separately passed a resolution recognising the mass deportations and killings of Armenians in Anatolia in 1915 as a genocide.

“If it is necessary for us to take such a step, of course we have the authority . . . If this is necessary, together with our delegations, we will close down Incirlik if necessary,” Mr Erdogan told a panel of journalists from a news group part-owned by his in-laws.

“If they are threatening us with the implementation of these sanctions, of course we will be retaliating.”

Mark Esper, the US defence secretary, said yesterday that he would need to talk to his counterpart, Hulusi Akar, “to understand what they really mean and how serious they are”. He added that he was disappointed about the direction Ankara appeared to be taking on the issue.

“If the Turks are serious about this, I mean, they are a sovereign nation to begin with… they have the inherent right to house or not to house Nato bases or foreign troops,” Mr Esper said. “I think this becomes an alliance’s matter, their commitment to the alliance, if indeed they are serious about what they are saying.”

It is not the first time that the threat of closing Incirlik has been invoked. The base, opened in 1955, was built by the US, but Turkey maintains a final veto on who is able to use it. In 1975 Ankara threatened to kick US personnel out of it in response to an arms embargo imposed in response to Turkey’s invasion of northern Cyprus.

Ties between the Nato allies have soured in recent years due to Washington’s support for Kurdish militias in Syria and its refusal to extradite a cleric whom Mr Erdogan accuses of plotting the July 2016 coup attempt.

After months of tense negotiations, Turkey finally allowed the US to fly anti-Isis sorties from the base, but not to provide air cover for the Kurdish YPG. A year later Binali Yildirim, then Turkish prime minister, suggested that Ankara could open the base up to Russia.

In October The New York Times reported that the US government was considering moving its nuclear weapons out of Incirlik because of the growing tensions.