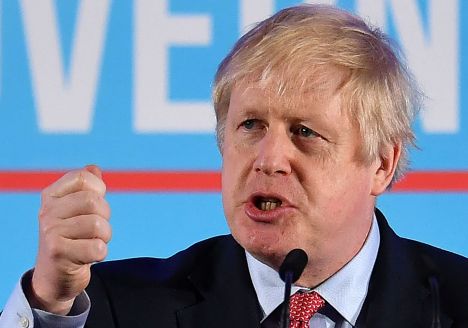 Boris Johnson has done it. The UK Prime Minister has stunned political pundits by leading his Conservative Party to score one of the country’s most dramatic electoral victories in decades.

The result is a vindication of Johnson’s strategy to campaign on a single promise to “get Brexit done.”
Related: Full UK election results
It was a crushing defeat for the opposition Labour Party, whose leader, Jeremy Corbyn, said he would step down after a “process of reflection.” And the leader of the pro-Remain Liberal Democrat party, Jo Swinson, lost her seat, as the Scottish National Party swept the board in Scotland.

By early Friday morning, the Conservatives had secured 364 of the 650 seats in the House of Parliament, well ahead of Labour’s 203 seats.
The Liberal Democrats have 11 seats, while the Scottish National Party posted big gains in Scotland, with 48 seats.
That would give Johnson a comfortable majority in the House of Commons and paves the way for Brexit to take place at the end of January.
“We did it,” Johnson said at a victory rally on Friday morning. “We broke the deadlock, we smashed the roadblock,” he told a cheering room. “A new dawn rises on a new day.”
“You may only have lent us your vote, you may not consider yourself a natural Tory,” Johnson said. “Your hand may have quivered over the ballot paper before you put your cross in the Conservative box and you may intend to return to Labour next time round. And if that is the case, I am humbled that you have put your trust in me and that you have put your trust in us.”
“I, and we, will never take your support for granted,” Johnson added.

The theme of the night became clear early on when one of the first constituencies to declare a result, Blyth Valley, went to the Conservatives. The Labour Party had held the seat since it was created in 1950. This was a big win for the Tories – and one of many more to come.

It was a scene that repeated itself throughout the night in parish halls, leisure centers and gymnasiums across the country. The Labour crowd was left watching jubilant Conservatives snatching away one seat after another.
As the results trickled in, the scale of the collapse in the Labour vote became apparent.
In Workington, Labour’s Shadow Environment Secretary Sue Hayman lost her seat to Conservative Mark Jenkinson, another sign that Johnson’s strategy had worked.
The traditionally Labour, pro-Brexit constituency was a key target for the Tories. “Workington Man,” a white, older, working-class man who supports Brexit, became a key demographic in the campaign.

This was very much a Brexit election and, in the end, Johnson’s campaign promise to “Get Brexit Done” appears to have swayed the vote.
The result is a clear indication that voters are tired of the country being stuck in a limbo and want to move on.
The Prime Minister promised to break the gridlock and deliver Brexit by the end of January.

Johnson has already struck a Brexit “divorce” deal with Brussels, but was unable to pass it through Parliament after Remain-backing Conservatives rebelled.
Having purged the rebels from his own party, and with his newly-acquired majority, that should no longer be a problem.
Once the UK leaves the European Union, Johnson plans to immediately start negotiating a new trade agreement with the bloc.
He is hoping to secure a deal by the end of 2020, before the end of the so-called transition period during which the UK will be formally out of the EU, but still subject to all its rules and regulations. The transition period is designed to prevent a hard landing.
This election result will undoubtedly shape the trade negotiations, and could lead to a softer version of Brexit – one that would see the UK staying more aligned to the EU. That’s because his large majority means Johnson will no longer need to please the very hard-line Brexiteers in his party in order to get his legislation through Parliament.

The election ended in heartbreak for the Labour Party – and the blame game started even before the results had been counted.
Corbyn had focused his campaign on increased public spending and radical economic reforms, while his Brexit plans remained vague. Corbyn pledged to renegotiate the withdrawal agreement and then put that new deal to voters with a remain option also on the ballot.
As it became apparent that Labour was going to suffer its worst election result since 1935, prominent party members started searching for answers.

Many blamed Corbyn for the fiasco.
Phil Wilson, the Labour Party candidate who ran for – and lost – the seat once occupied by then-Prime Minister Tony Blair, vented his fury at Corbyn on Twitter.
“The Party’s leadership went down like a lead balloon on the doorstep,” he said. “Labour’s leadership needs to take responsibility.”
Outspoken Labour figure Jess Phillips tweeted that the anticipated Conservative victory “feels like a punch in the stomach.”
And Alan Johnson, former Labour Party politician and Home Secretary, said Corbyn “couldn’t lead the working class out of a paper bag.”

Corbyn himself blamed the party’s loss on Brexit overshadowing all other political debate.
Speaking after defending his own North London seat, Corbyn announced that he would not lead the party into the next general election, but stopped short of saying exactly when he would leave the post.
“I will discuss with our party to ensure that there is a process of reflection now – on this result and the policies of the party going forward, and I will lead the party during that period to ensure that that discussion takes place and we move on into the future,” he said.
It was also a deeply disappointing night for the Liberal Democrats. The anti-Brexit party had hoped to scoop up the votes of Remainers, but ended up with fewer seats than they won in the 2017 election.
In one of the biggest upsets of the night, the Lib Dems’ leader, Jo Swinson, lost her seat to the Scottish National Party.

North of the border, the SNP won a landslide, bagging most of the country’s 59 seats. That result will likely make the party’s calls for a second independence referendum much louder.
Scotland voted to stay in the European Union in the 2016 Brexit Referendum, and the SNP has consistently argued the country is “being dragged out” of the EU against its will.
While Johnson has rejected the idea of holding a second vote, SNP’s leader Nicola Sturgeon is likely to argue the election result gives a clear mandate for a new referendum.

European leaders have welcomed the election results. The EU didn’t want the UK to leave the bloc, but uncertainty surrounding Brexit has exhausted their patience.
The President of the European Council, Charles Michel, said now the election result is clear there needs to be clarity on Brexit “as soon as possible” in order to give as much stability as possible to citizens and businesses.
“We are ready,” Michel said while speaking in Brussels. “The European Union will negotiate in order to have close cooperation in the future with the UK.”
France’s European affairs minister, Amélie de Montchalin, reiterated Michel’s comments, saying that France had been asking for clarity around the UK’s Brexit plans for a long time. “This result brings that,” she said.
That view was shared by investors – the British pound jumped 2% higher after the initial exit polls were released.
As the results came in, US President Donald Trump tweeted: “Looking like a big win for Boris in the U.K.!”
Trump has spoken in support of Brexit and backed his “friend” Johnson before Thursday’s vote. The endorsement was met with a lukewarm reaction in the UK, where Trump is not popular.
It was a good night for Boris Johnson. But while he can celebrate the win, what comes next will be a battle of much bigger proportions.
Getting a divorce deal from the EU was complicated. Securing a trade deal with a partner that is larger and much more experienced in negotiations will be even harder.