Kremlin propagandists have portrayed Russia as an island of calm and stability in contrast with European neighbors facing chaos arising from the COVID-19 pandemic.

Russia, the world’s largest country by territory with a population of 144 million people and shrinking, has reported relatively low figures of coronavirus cases, fewer than in tiny Luxembourg – and even more surprisingly – only three deaths from the virus.

Yet, beneath this surface lies a more complicated picture. Russia’s statistics on coronavirus cases has been questioned by doctors and analysts as potentially false and unreliable – something that the Russian government has denied.

Moreover, Russia’s response to the outbreak of the virus has been relatively weak and less drastic than in the European Union and in Ukraine. Russian authorities have argued such a response is sufficient.

The coronavirus pandemic has come at an inconvenient time for Russian dictator Vladimir Putin since a vote on letting him run for two more terms was initially scheduled for April 22. Putin had to postpone it indefinitely on March 25.

One theory is that the Kremlin had been trying to downplay the pandemic to avoid canceling the vote, which could have led to many deaths from the coronavirus due to large gatherings of people.

The initial data for coronavirus cases in Russia was very low, given the country’s vast size, proximity to China and Europe, a big number of Chinese migrants and millions of tourists returning from abroad. Currently, the official number of coronavirus cases as of March 27 was 1,036 with three deaths.

The Alliance of Doctors, an independent labor union, has criticized the official statistics.

The authorities “constantly lie about the coronavirus, underreport the number of infected patients and through their stupid actions they will aggravate its expansion,” Anastasia Vasilyeva, head of the union, said on March 10. “They want to downplay the scale of the problem.”

She said that special units had been created at hospitals to treat coronavirus patients but they had been camouflaged as pneumonia, flu and common cold units.

Speculation is rife that Russian doctors are routinely diagnosing coronavirus patients with pneumonia, which often accompanies the virus, instead of COVID-19 itself.

The number of pneumonia cases in Moscow rose 37 percent year-on-year to 6,921 cases in January, compared with a 3 percent increase nationwide, according to the State Statistics Service.

Moscow’s health department contradicted the State Statistics Service’s figure on March 13, claiming that the number of pneumonia cases had fallen 8 percent in January and dropped 7 percent in February.

Coronavirus testing in Russia has been monopolized by a lab in the Siberian city of Novosibirsk, which is located 3,345 kilometers east of Moscow. The lab has been physically unable to cope with processing coronavirus tests.

Russian authorities claim, however, that the situation with COVID-19 testing in the country is under control.

Political analyst Dmitry Oreshkin and Gleb Pavlovsky, a former political consultant for Putin who has become critical of him lately, argued that official statistics was untrustworthy.

“Local officials don’t want to get in trouble (by reporting high numbers of coronavirus cases),” Oreshkin said. “It’s similar to how in the Soviet Union collective farm chiefs reported statistics about growing harvests, but then everything collapsed.”

He added, however, that the real number of coronavirus cases and deaths will be impossible to hide if it becomes sufficiently high, and the “information bubble will burst.”

“When officials realize they won’t be punished for it and they might even get money, real statistics will start coming in from the regions,” Oreshkin said.

The figures in Belarus, a neighboring dictatorship run by President Alexander Lukashenko since 1994, are also suspiciously low – 86 coronavirus cases and zero deaths.

Until March 25, the official number of deaths from COVID-19 had been zero, which beggared belief. Now it stands at a tiny three for the world’s largest country.

Some other countries like Italy have opted to include all patients who have additional diseases in coronavirus deaths since it is often hard to identify which specific illness is the main reason of death.

But Russia has chosen the opposite approach.

On March 19, Moscow Mayor Sergei Sobyanin announced the death of a 79-year old woman who had COVID-19 and other diseases. But the Russian government decided not to include her in official statistics for coronavirus deaths, saying that the reason for the death was a blood clot that broke.

Compared to China, the European Union and Ukraine, Russia’s response to the pandemic has been less stringent and delayed.

Russia closed the border with China in January and banned the entry of Chinese citizens in February.

However, Russia has imposed no national or regional lockdowns or compulsory stay-at-home orders like in many Western countries. Most of the restrictions that are in place were also imposed later than in Ukraine or major European countries.

On March 25, Putin announced that the next week would be declared a paid holiday for most workers and announced generous emergency social benefits for households, financial incentives for businesses and new taxes for the wealthy.

Oreshkin argued that Russia’s more muted response was due to the fact that Russia’s authoritarian government is less responsive to the electorate than in the West. In Europe and in Ukraine the authorities have to react more decisively because there is pressure from the electorate and they may be voted out, he said.

“In Russia the public opinion is silent,” Oreshkin added. “There’s a feeling that a crisis is unfolding (in Europe), while in Russia everything is calm and good.”

Belarus has chosen an even more limited reaction and decided not to apply most of the restrictive measures taken by its neighbors.

Lukashenko has dismissed the pandemic as a “psychosis” and jokingly told Belarusians to drive tractors to fight the virus.

Meanwhile, the response to the pandemic in Moscow has contrasted with that elsewhere in Russia.

Moscow Mayor Sergey Sobyanin has effectively bypassed the Novosibirsk lab’s monopoly by promising to open nine labs for coronavirus testing in the capital. He has also launched a major complex for COVID-19 patients in the outskirts of Moscow and started building another one.

He has even gone so far as to question official statistics on the virus. On March 24, Sobyanin said that the low official number of coronavirus cases may be due to a low level of testing and “there are far more people who are infected.”

In Moscow the situation is more transparent than elsewhere in Russia, and it’s hard to hide something from society, Oreshkin argued.

Sobyanin’s activities have allowed him to build political capital and some argued he is aspiring to be Putin’s successor as president – possibly with Putin’s blessing.

However, Oreshkin and Pavlovsky were skeptical about this theory. Oreshkin said that it is being spread by Sobyanin’s enemies because “the best way to kill someone’s potential is to say publicly that someone is Putin’s successor.”

Russian propagandists like Vladimir Solovyov and Dmitry Kiselyov have contrasted Russia’s response to the coronavirus to what they portrayed as an apocalyptic situation in Europe, including Italy.

To project its geopolitical might, Russia also sent warplanes with medical supplies to Rome on March 22, as well as test kits to Armenia, Belarus, Kyrgyzstan, Uzbekistan, Syria, Egypt, Iran, Venezuela and North Korea.

As part of the Kremlin’s public relations campaign, Putin on March 24 visited the main coronavirus hospital in Moscow in a full hazmat suit along the lines of his previous stunts that included swimming in the Black Sea to hunt for ancient Greek amphorae and flying with cranes on a hang glider.

Despite the pandemic, Russia initially scheduled a vote for April 22 on constitutional amendments that would allow Putin to run for two more presidential terms after his current one expires in 2024.

The amendments have already been passed and signed by Putin. However, he also decided to legitimize them with a popular vote that is not stipulated by Russian law. The opposition says that, in contrast with referenda envisaged by Russian law, the vote lacks any clear procedure or rules on observers and ballot counting, which will make it easy to rig. The Russian government has portrayed the vote as transparent and denied intentions to rig it.

Oreshkin said that electronic voting and voting from home will be likely used widely with the stated goal of minimizing the damage of the coronavirus, which will also make it easier to falsify.

He said, however, that delaying the vote until this fall would be risky because “by September irritation with Putin will increase.”

Pavlovsky also argued that there are already risks for Putin’s plans to stay in power for life.

“This topic stopped interesting people,” he said. “They’re at home, feeling bad and afraid. They don’t care about Putin anymore.” 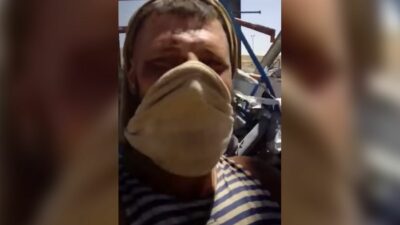